Any articles about users beginning searches on maps vs the traditional SERP?

My team recently had a little discussion which led to a bigger question. When talking about how we found businesses in our personal lives, half of us said that we would open up our Maps application and start searching there, and half said they would begin in the traditional SERP and move to Maps if pointed there by the local pack. I'm very curious if there's been any larger studies done on how often users start searching for businesses in the regular SERP versus on a Maps app. Has anyone seen data like this that they could point me to?
Sort by date Sort by votes

@Annika Neudecker, I'm not aware of any, though I'd also love to see a study on that topic. It would be mighty hard to research, though, just because the search process varies so much between industries, people, devices, and markets (e.g. places with thin vs. dense competition). Of course, it also depends on whether people see the "right" business right away, or only after sifting through spammy or similarly-named businesses.

I think the closest you'll get to hard numbers that are relevant to your specific case is to look in AdWords (if you run ads). You could compare (a) the number clicks on location extensions to and (b) in GMB "insights" to (c) all other clicks, both in and out of AdWords. That could give you a rough sense of how many people are Maps-focused vs. SERP-focused. The "devices" reports in Analytics and in AdWords could also give you a rough sense of at least one thing: however many searchers are on desktop probably didn't start their searches in Maps (because the Maps app is so much more prominent than the Maps tab).

All of that is pretty squishy, but I suspect only Google knows definitively, and even then probably no one person knows the whole story.
Upvote 3 Downvote

In addition to what Phil said about clicks in Ads, you could also look at Ad impressions.

And this doesn't directly answer how users start searching, but you can see where they're finding your business listing (Google Search versus Google Maps) in GMB Insights. 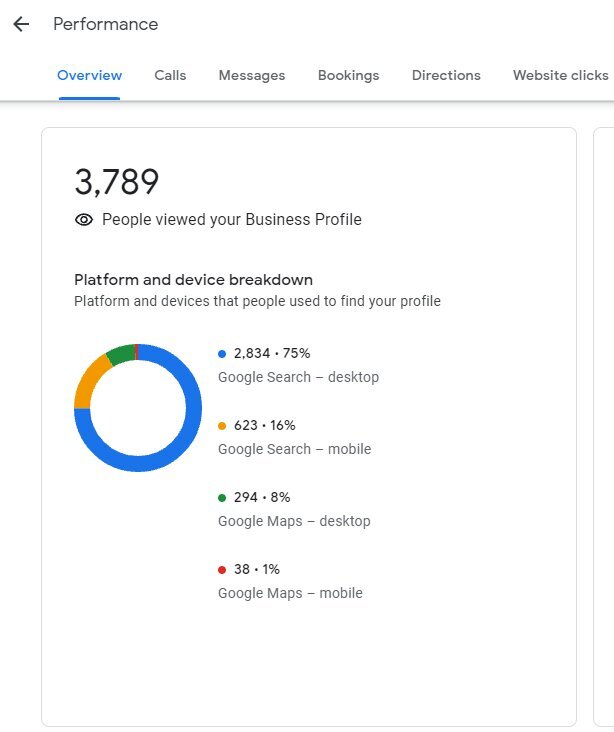 It definitely varies by industry (ex. for "restaurants", I'm guessing more users start by using Google Maps since they're looking for a place to eat near them that they can quickly get directions for).
Upvote 3 Downvote
You must log in or register to reply here.

Ranking Problem for Locations Across The Street From Each Other

H
Why is my hidden address appearing on maps search but not on local search?