When working with service-based businesses is it best to designate their service area within the Places dashboard by miles radius or by listing out every city they serve?

I have found the latter to be more useful and accurate because if you list each and every city they serve, the service area "mark" on the map is precise. If you go with miles radius, the circle on the map sometimes hits or misses some of the cities.

Just curious if either way makes a difference in the scheme of things.

Here is my opinion and what I teach in my Advanced course now.

1st off if it's a competitive term or bigger cities you are only going to rank in the city you are physically in. Changing service area does not affect that at all. Setting service area for city 2 will not help you rank in city2 if your dash address is not in city 2.

2nd and super important for customers/lead gen... If you have address hidden as most SABs need to, AND if you list a bunch of cities or zips, Google will put you smack dab in the middle - and sometimes that's in middles of nowhere.

Can't tell you how many times I've helped someone in the G forum that screams "Google is stupid - it put me in the middle of the forest and there is not even a town there. All my customers are in city 1,2,3." Or worse, sometimes the map marker ends up in the middle of desert or a lake.

Best practice by far IMO is city you are in and 20 mile radius. I think setting radius farther than that does not help you rank in outlying areas BUT could potentially water down your rank strength in you main city you are actually in.

Disclaimer: I don't work with SABs so don't have much 1st had experience, so my opinion above is based on research, what others have said and my own testing on my own listing. BUT it's primarily based on how much I know about how Google works, how the local algo thinks and some VERY strong assumptions. Don't think anyone knows or can prove most of this for a fact.

One little trick that can be helpful and does not hurt. I think by default G fills in that 1st service area box with either your full address or city and zip. But anyway it adds your zip. If it's a big city and client is way on outskirts of that city and their zip is in the box it will put their map marker in middle of that zip.
So then if someone is searching on maps and looks at the map markers it may look like the business is far away.

Get rid of zip and JUST PUT CITY STATE. And guess what? Even if client is on the outside edge of town, Google will drop that map marker smack dab city center!!!

Note: Above, I'm talking the city state they are actually in NOT the city next door they want to rank for. I experimented with my listing once. I'm in San Marcos CA about 30 miles north of San Diego. If I was a moving company or contractor I'd likely want to rank in the main metro San Diego. Not my little town. I changed that service area setting to San Diego, 20 mile radius. It put me right downtown in San Diego. BUT I don't think that would do me any good because if competitive market I'm not going to rank at all or show up for San Diego searches with a San Marcos address in dash.

Interesting stuff...glad I asked. So let me follow up...

What if we specify the cities and check on the map and the map marker isn't in the middle of a desert or lake or whatever? Then we are probably fine, right?

It seems to me what you are saying is that the only difference between the two options is that one *may* put you in the middle of a lake. Is this a correct interpretation?

By the way, the reason why I'm so concerned about how it looks on the map is because when I embed the map on their contact us page, I like to show their service area on the map by default. It looks so much cleaner when the service area is precise vs. just a generic circle. For instance, one of my clients is in Tampa. If we do the radius thing, the circle goes way out into the ocean. It looks silly.

Sorry not sure.
R

Hi Travis, would you mind sharing how you go about embedding the Google Map with the service area showing?

I know all about embedding the (proper) map (properly), but are there some certain variables in the embed code that you add/change to achieve this?

Copied that link to new window to be sure service area still showed.

Linda Buquet said:
So with my listing. 1st I clicked 'view service area" on the info bubble.
Click to expand... 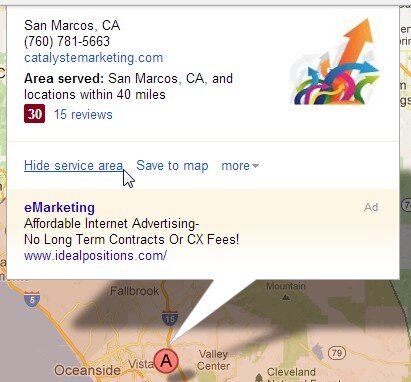 Linda, have you tested out how to achieve this with the new Google Maps?

Does the setting 20 mile radius suggestion also apply for businesses with a physical address but also serve the area such as an HVAC business?

For example in this screenshot. Screenshot by Lightshot
The business has a physical address in Chandler Arizona but can also serve surrounding areas.

That's what I would do...physical address and 20 or 30 mile radius.
You must log in or register to reply here.

B
Cities or Counties for Service Areas?