GMB Display Update? NO Reviews but A B Cs 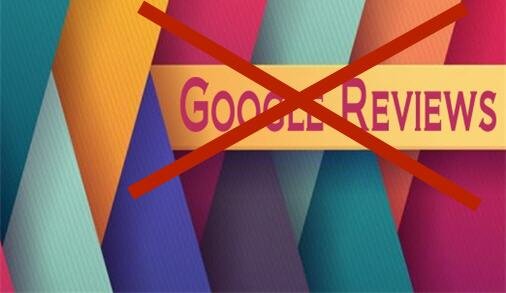 NO Reviews but A B C Marker Style Display Expanding???​
So a Twitter convo popped up started by
John Leo Weber that prompted Barry from Search Engine RoundTable to write this post:

<a href="https://www.seroundtable.com/google-adds-letters-to-local-pack-results-21576.html">Google Adds Letters To Local Pack Results</a> - I pointed out in comments that there are also NO REVIEWS in that display and it's been around awhile for branded searches.

Not sure what he searched for but Google mistakenly thought it was a branded search. Branded search has been doing that style with letters for a long time. I posted about it maybe 8 months ago or so.

Search Seattle Mcdonald's and you'll see it. The A, B, C is to tell the different locations apart. Note also no review stars in that display.

Now do pure generic like Seattle Chiropractor or Seattle plumber and you'll see the standard display. No letters but yes to reviews.
Click to expand...

So we went back and forth on Twitter about all the queries that are NOW showing that new style display. Barbers, movers, pest control, etc.

Haha I write so much that I forget what I wrote half the time. (Senior moments.)
Wrote about this exact same thing 8/15.

<a href="http://www.localsearchforum.com/google-local/35962-no-reviews-stars-new-local-3-pack-yet-another-google-test.html">NO Reviews or Stars In The New Local 3 Pack - Yet Another Google Test?</a>

That post was about the fact - that display mainly shows for branded terms but I mentioned it was also showing up for some generic terms as well.

In that post I speculated that the missing reviews and review stars could be one more step toward pay to play. (Want to be in the new top of page 3 pack? Higher up with reviews? Get on board the new paid placement option.) PURE Speculation...

STAY TUNED. I'll ask Google and see if I can get a comment. (But it will likely be that Google is always testing different display layouts.)

Has anyone else tested this? What results have you seen?

I commented on the article but this format has been around for a long time and actually ranks businesses differently as well which is very interesting. So when I see SERPS flip from showing branded (what he's seeing) vs. non-branded results, you'll see the 3-pack totally change which businesses it shows.

I have some screenshots from one I recently noticed that flipped a week ago.

Yes, something is going on with the reviews.

I still see the review count and ratings displayed in the search results and local finder. However, not all the reviews load when you click "More Google reviews". Only a few of the reviews show up for each business for me.

Has anyone else tested this? What results have you seen?
Click to expand...

I had posted about this in Google Local IMPORTANT earlier today with more details.
So merged your new thread into this one. See my post on top.

Marthy said:
Yes, something is going on with the reviews.

I still see the review count and ratings displayed in the search results and local finder. However, not all the reviews load when you click "More Google reviews". Only a few of the reviews show up for each business for me.
Click to expand...

Hi Marthy, yes there are review issues now. See this other thread from Colan today.
<a href="http://www.localsearchforum.com/local-reviews/39710-widespread-google-reviews-bug.html">Widespread Google Reviews Bug</a>

These "ABC Packs" have been around every since Google launched the new 3-pack style. Some non-branded terms that have always triggered this style are 'storage', 'gas station' and 'office supplies'.

Here's an odd variation on this whole "what are they showing" theme:

I played around with a few search terms and mostly just got the expected place markers and no ABC markings. I tested with "Barbers" and indeed that one DID use the ABC markers.

Then, I tried "detective agencies" (don't ask me why, I just was experimenting) and I got the 3-pack shown below. Note the one map marker that I circled. What is that supposed to be? A graduation mortar board? I just thought I'd share it since it's kind of odd-looking. 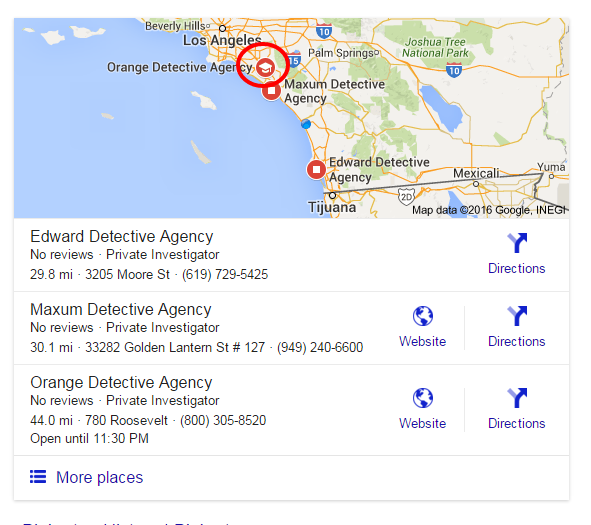 that graduation hat is just the normal symbol for a school/university/college. If you check out Orange Detective Agency's profile:
https://plus.google.com/109498641944099723720/about

looks like they accidentally have 'school' as a second category. Not sure how that might have happened, but I don't see any category changes in the listing's map maker history since they moved location in 2014, so maybe has something to do with that? Not sure. Either way, there's my own little bit of detective work. Case closed.

Edit: bah, should have clicked 'back' another two times. Looks like in 2013 they were purely an educational facility (teaching people how to be detectives?) and they switched over to doing PI work. Looks like 'school' as a category was an accidental tag-along that they didn't fix when they made the switch to their new business model. NOW case closed.
You must log in or register to reply here.

Transition from One Location to Multi-Location Local SEO

My client went from averaging 20 new reviews a month to 3 a month and can no longer get posts to publish.
2