I'm not sure if this question should be posted under Google Places or Google+ so I've decided to post under Google+ Business Pages.

I also got an email to verify the email address associated with the Google+ profile, which appears to go through the same PIN verification process with Google Places. When I click on it, I get a screenshot that looks like below (Note I've blocked out actual listings themselves for protection of the client): 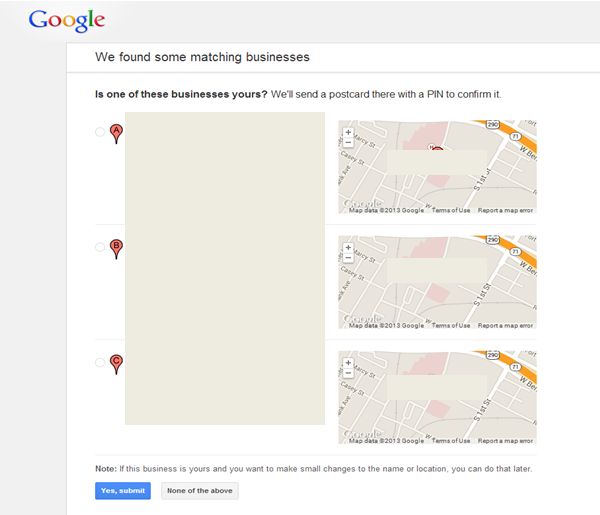 Has anyone seen this?


The client's Google Places accounts all have been verified already, but can someone tell me what this verification process accomplishes? The other issue is that all the listings are valid and should be associated with the email address. Does anyone know if I can go through this process multiple times with the same email address?

IF I'm understanding you right (and I might not be because was not totally clear about your question.)

You said profile - but profile is a personal page for John Smith. Not a business page. But the part about verifiying the email address threw me too.

SO assuming you are talking about the Google+ Business page STOP and don't go any further.

It sounds like you are trying to verify a Google+ Business page because it's trying to find related Place pages and asking which one you want.

Doing that would MERGE the Place page and G+ business page which Google recommends waiting to do because it's buggy.

There is a brand new update slowing rolling out where Google is UPDATING Place pages to G+ Business pages. So then you don't need to merge/reverify/wait for post card and deal with the potential bugs.

So if I were you I would not verify and would just wait for Google's next move. I'm afraid some folks who took certain steps in the past may end up having to sort of delete and start over. So I would just wait and don't verify now.

If you get a message that sounds like your G+ edits are not going through, it's bad messaging they do. It's just trying to tell you the edits won't show up on maps/search unless you verify/merge. But then out of the other side of their mouth they say wait, don't verify/merge - so it's all just really conflicting. I'd just hold off and wait for the dust to settle and clear direction from Google.
R


Thanks for the advice. The page is actually a Google+ Local page. I know that Google+ Local and Google Places is the same thing, but for my client, these appear to be existing as separate accounts (the urls are different).

When I click on the email I'm taking to the Google + Local page with this message:

when you click on message, it directs you to:
https://support.google.com/business/answer/2911778?p=about_verification&hl=en&rd=1


when I click on Business breadcrumb in upper left hand corner, takes me to the Google Places dashboard with listing of all accounts under the email address.

Thanks for your help in advanced Linda!

"When I click on the email I'm taking to the Google + Local page with this message:""

That screen you shared is NOT from a Google + Local page (AKA Place page) it's a Google+ Business page set up in the local category. So it's a different type of page.

As I explained it's asking you to verify which would merge it. Don't do that stop there. That's one of the messages I warned you that make it sound like you MUST verify for the info to show but that's not correct and Google says don't do it.

Yes it could lose reviews and it's possible it would have to start over in the local database which would mean it maybe would not rank for anything for 6 weeks or so. It would also be a new CID. Basically a new listing instead of a mature listing.

"It's really odd because for another client Google appears to have auto merged Google Places and Google+ Local page (the Google Places url redirects me to the Google+ Local page url)."
Again they are the same page. I think you are talking about merging the Place page (AKA G+ Local) with the G+ Business page? (I know the terms are really confusing.)

Yes I announced recently Google automatically - not merging but UPGRADING everyone. All Place pages will eventually upgraded to what looks like a merged G+ Business page with both reviews and social. THAT's why Google says don't manually merge or verify G+ right now.

"Do you have example of what the combined dashboard looks like?"

There is no combined dash. The live pages merge together but there are still 2 separate dashboards.
R


Thanks so much for the clarification regarding the type of pages I'm talking about! And also for the dashboards - I thought I was going a bit crazy. I have one follow-up question for you regarding your answer:

"Yes it could lose reviews and it's possible it would have to start over in the local database which would mean it maybe would not rank for anything for 6 weeks or so. It would also be a new CID. Basically a new listing instead of a mature listing."

Do you think that if I keep the mature listing (current CID) which has a different email address associated with the account from Google+ Business page, Google will still be able to upgrade Google+ Local (aka Place page) to Google+ Business?


Lastly, not sure if this is within your scope to answer, but we also have a YouTube channel for the client (has a completely different email address associated with the account), which is accidentally linked to a newly created Google+ page (has the tabs - About, Posts, Photos, YouTube). Based on the tabs, I'm assuming it's a Google+ individual profile and not a Google+ business page. Am I correct? Do you foresee any issues with this other Google+ account?

As far as I know whatever email account the Place page is in, when it upgrades it will just upgrade within that same account. Now just have to ask, that account is not by chance your own account you are using for multiple clients is it? It's a dedicated account for that client that either they set up or you can give them log in to?

The YT Q sorry don't know and can't even guess about the type of page without seeing. The tabs are not always a good indicator.
R

"As far as I know whatever email account the Place page is in, when it upgrades it will just upgrade within that same account. Now just have to ask, that account is not by chance your own account you are using for multiple clients is it? It's a dedicated account for that client that either they set up or you can give them log in to?"

This particular Place page is actually linked to my own account (personal email address) and which I can't provide access to a client (remember this was the issue I was talking about - accidentally claimed it and didn't know was associated with my own email address instead of the email address I set up dedicated for the client) Thus, I was asking you before about un-claiming and reclaiming Place page under different account, but after weighing in on what you said about the local rankings it seems that it's better to keep the mature listing (same CID).

Regarding the YouTube question, it's a question of what makes the most sense:

A) Should I be scrapping their established Google+ profile (which we've already confirmed authorship via their website) and build up their new Google+ profile linked that's linked with YouTube channel that has videos uploaded and views already? Remember the account also is linked with Google+ profile and 2 of their Google Places (Google+ Local pages)