Someone suggested this status: Permanently Closed

My client has been getting phone calls from customers off and on over the past couple of months mentioning that Google shows them as permanently closed. In our investigations, we had not been able to replicate the issue, so we instructed the client to ask their customers for more details as to when/where they saw the message.

My client was finally able to do a screen shot of the Google Maps listing on her cell phone and it was showing the message "Someone suggested this status Permanently closed" just above the address and hours lines. 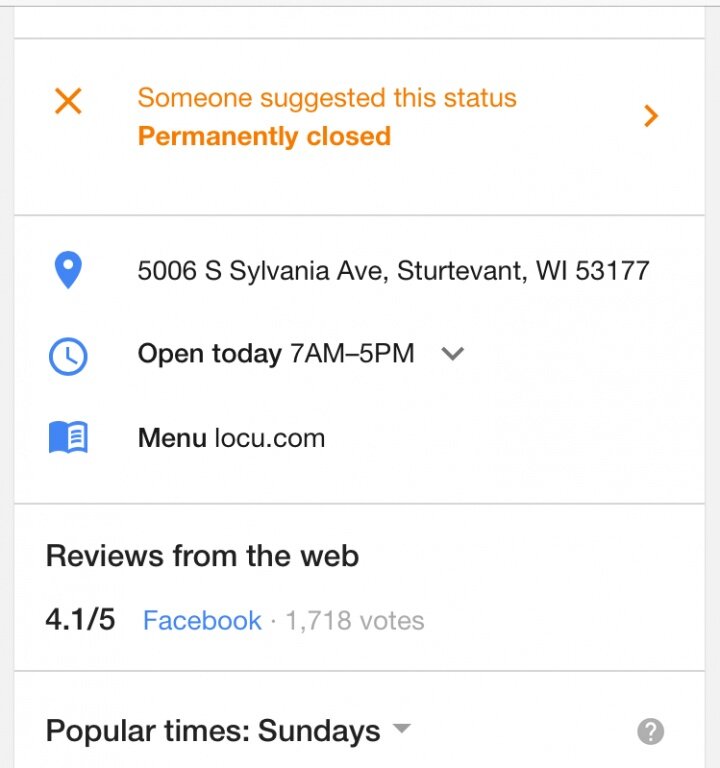 This suggested edit wasn't actually accepted by Google, but rather was displaying the warning. I checked in GMM and don't see any edits that would suggest anyone made attempts to edit the listing.

This issue coincides with the IYP listing cleanup work I have been performing over the last couple of months for this client. Is it possible that this 'closed' warning could be from Google themselves being confused due to the closure of various outdated/duplicate listings over the local listing ecosystem? (Or is this edit suggestion only displayed if a Maps user clicks the 'Place is permanently closed or doesn't exist' button?)

Since it says "Someone suggested" I assume that's what happened.

When you click the right arrow I assume there is a way to say it's still open? Providing that's true, I'd get a few people from different locations, IPs and devices to click still open to make that message disappear. For instance you and team click from home tonight and ask a couple friends to as well.
R

The message disappeared after my client clicked the option that it is in fact open.

I've asked them to check the dashboard before re-marking it open on Maps if it happens again, to see if it actually shows up in the dashboard or not.

I'll try your suggestion of marking it as open from multiple locations if it happens again and isn't resolved with just one suggestion.

Russ
You must log in or register to reply here.

GBP Attacked and Marked as Closed. Why Would Google Accept This?

Permanently Deleted listing still showing in Search when other franchise listing should be in its place.

Reporting a client's competitor's GBP listing for taking over an old/closed shop (different industry), inheriting all its (off-topic) reviews

Client sold one of their locations to a competitor - what's the best practice for the Map listing?