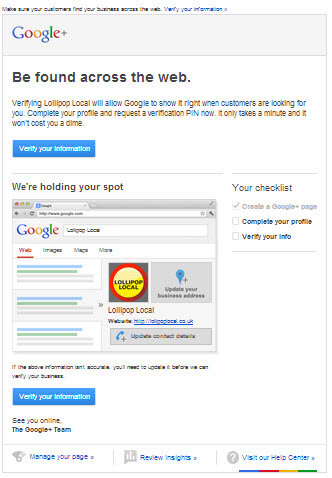 Received this on Thursday - after my client had received one on Wednesday.

Linda's guidance on my previous thread about a potential duplicate helped me to work out what is going on.

We both set up Google+ Business pages when they were first introduced - long before Google Places became Google + Local.

We both stopped posting on them when our businesses got a Google+ page instead of a Places page and we realised that there could be some conflicts.

The real problem here is that we are both SABs - service area businesses - who are not entitled to a Google+ Local page under the current rules.

It seems a bit off that Google are inviting us to 'be found across the web' by verifying these pages... when their rules say that we're not allowed to have them

Thanks for this update Jo, I still haven't seen an update notice yet and was curious about SABs with a +business page already, like you mentioned!

Thanks for this update Jo, I still haven't seen an update notice yet and was curious about SABs with a +business page already, like you mentioned!
J

I'm just not replying to mine for the moment - until we have proper clarification. It's a shame the email is a no-reply so we cannot ask

I had a non-SAB client receive the same e-mail today.

Seems to me that Google is just trying to encourage businesses who have a claimed G+ Local page and a G+ Business page in the same account to go through the verification process.

Not 100% sure why though since the new dashboard will allow this to be completed in one click of the mouse. Even for SAB's...

I had told all my clients not to create anything because it would all get sorted out in the final transition.

Jo Shaer said:
I don't have a claimed G+ Local Page and G+ Business Page in the same account

I had told all my clients not to create anything because it would all get sorted out in the final transition.
Click to expand...

Oh, ok. Must be for any business with a G+ Business page that hasn't been verified.

I think that's most likely it, Colan

Can you send me a link to an example of a G+ Local page? I really need to get my head round what they all look like!

Just posted this in the other thread to you:

Sorry Jo, thought you knew the difference. The link below to a BIG post I did explaining it all was in your training. Part 1 training docs top of page 6. (Sorry I know there is an overload of info in there.)

My page is a merged/verified Google+ Business page. (Should not be. I jumped gun and merged before Google told anyone that hidden addresses should not. They told me I could keep it that way for testing, but again hidden address should not have merged.)
You must log in or register to reply here.

E
Why am I having to go through verification again, when post verification was completed less than 24 hours ago?