OK so this is weird. Think I figured it out, but not sure...

Have you ever seen a plain G+ Business page rank in the pack?
(To tell it's not a G+ Local page - no review feature and "story" instead of description.)

This is the Los Angeles personal injury attorney SERP so many of us have complained about, due to the spammy violation filled listings that surfaced as soon as Pigeon hit.
Here is one of my screenshots from beginning of August.

<img src="http://marketing-blog.catalystemarketing.com/wp-content/uploads/2014/08/LAinjuryAttorney8.2.jpg" alt="LAinjuryAttorney8.2" width="65%" />​
In case you have not been following along. I explain the problem at bottom of the screen shot. C & D violate due to both being fake KW stuffed names, plus there are multiple listings for the same practice, (he has at least 3 other listings) plus they don't link directly to site which is another violation - they link to LA search results pages of high authority sites. And additionally - pre-Pigeon Google would not award 1 attorney 2 listings in a competitive pack like LA, especially with the same phone#.

Since I know many of us have reported those listings, I check the pack a couple times a week to see if they are gone. Today I checked and found something odd.

The one that's C above - that's linked to Avvo still ranks. BUT that's not the odd part.

The cray cray Pigeon is ranking that page even though now it's just a G+ Business page.
NOT a verified local page with reviews - so it's technically not even possible for it to be ranking.

Here it is in the SERPs los angeles personal injury attorney - The Avvo listing is now ranking B for me on both FF and Chrome. But check it out. It's NOT a G+ Local page! It's a G+ Business page!

So here is what I 'think' happened. When there is a GMB violation, Google sometimes instead of deleting or suspending the entire page, just deletes, suspends or disables the local part of the page - which leaves the G+ page with social features, BUT no ability to rank or have reviews.

So I think maybe Google finally took action on this page and disabled Local - it just for whatever reason is still in the pack. I'm hoping it drops out in the next couple days. Let's watch it and see.

Then lets all gang up on the one that's left and see if we can get it removed too. That is not the practice name - it's "The Law Offices of Robert A. Brenner" and he already has 3 other listings too.

Check that link above in Classic Maps. That Avvo listing is ranking in maps too and is even showing service area settings, but again when you click through, it's only a stripped down G+ page now.

Have you ever seen a plain G+ Business page rank in the pack?
You agree it was stripped of local and has just not dropped out of the pack yet?

Bets on how long it will take to drop off?
I say within 2 days

Who will gang up with me and report the other one???

PS I don't have a dog in this fight - don't even have clients any more. Just doing it for the integrity of the search results and to try to help train this cray cray Pigeon.

Thanks for reporting that other listing Phil.

I'm off to do it again now too.

Wait Phil, how exactly did you report so I can follow the same path.

How did you report?

Linda Buquet said:
Wait Phil, how exactly did you report so I can follow the same path.

I just pulled up the knowledge graph for the spammy result, and clicked on the microscopic "Feedback" link.

That's what I tried but I was in FF, will try it with Chrome next.

However I don't know how much that will do because I think that feedback goes to either the organic or G+ team, not the local team that's more involved with GMB violations.

Linda Buquet said:
That's what I tried but I was in FF, will try it with Chrome next.

However I don't know how much that will do because I think that feedback goes to either the organic or G+ team, not the local team that's more involved with GMB violations.
Click to expand...

The feedback link took me to Maps - the ersatz "Report a problem" feature that seems to have replaced "Edit details" (as Colan reported the other day). It's as local-specific as it gets, so I'm pretty sure the GMB people will see it. (Of course, whether they do anything is another matter.)

Thanks Phil. Yes I just did it on Chrome and it goes to new maps. Awhile back that feedback link went to more of a blank troubleshooter type form fill that looked like it was G+ related.

I forgot that feedback still works with hidden addresses as long as you are on new maps. (I normally use FF connected to Classic.)

To make it easier for others to report. Here is what I said. Copy and change it up a bit, don't paste exactly.

NAME FIELD:
Fake name in violation with GMB guidelines. Name = Law Offices of Robert A. Brenner - But he already has 3 other listings so this is a dupe.

NOTES FIELD:
This listing is spam, violates several GMB guidelines and has been reported multiple times. 1) Fake KW stuffed name 2) Duplicate - he already has 3 other listings. 3) Since address is hidden I'm assuming address in dash is a bogus location - virtual office or Regus. 4) Does not link directly to his site but to a general search result on a high authority directory. Listing should be removed.

Here is what I'm seeing in Miami: 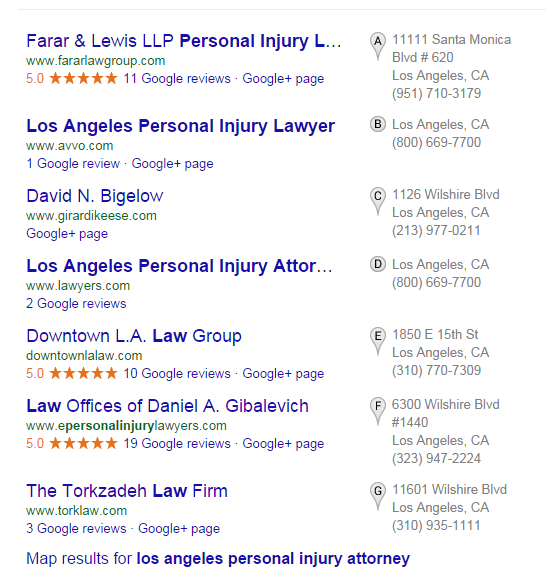 Thanks Stefano, that's what I saw earlier too.

And thanks for reporting too!

Just for tracking and to bump this for anyone that was not around yesterday...

That G+ Business page is still ranking B in the pack.
The one with the name Los Angeles Personal Injury Lawyer that has Avvo as site.

OK so this is really bizarre BUT looks like we are making some progress.

In case you have not been following along...

But both listings were for an Attorney named Robert Brenner

HOWEVER... here is where it gets a little odd.

After several of us reported these for months, the C listing as I reported in the 1st post, was still ranking, but became a G+ page with no local features. (So should not have been ranking at all.)

So we reported some more.

NOW it appears it's fixed in the SERPS. It APPEARS both are gone...
But appearances can be deceiving, especially on Google it seems.

So the spammy names are gone. But Brenner ranks D. (Don't think he should be ranking at all after everything he's been pulling, but that's beside the point.)

Brenner is D with his correct name and correct website. So that's a step in the right direction.

BUT click the link to the G+ page: It goes here.

So in the SERPS it has right name, but the name in the pack is usually pulled from G+ page.

The name on that G+ page is still:"Los Angeles Personal Injury Lawyer"
The page is still linking to Avvo NOT to brenner's site.
AND it's still only a G+ Business page - NOT a local page, so should not rank in search or show up in maps at all.

So A) How can it still be ranking and B) Where is Google getting the name that shows in SERPs because it should be pulling from the G+ L listing.

And C: When you search for that phone in maps the G+ Page ranks/shows up with different name and site that the actual page does.

But when you click through on that map listing it goes to:
Los Angeles Personal Injury Lawyer
Los Angeles, CA 90001
(800) 669-7700
avvo DOT com/personal-injury-lawyer/ca/los_angeles.html

Have you ever seen anything so bizarre? Are you following me???

It almost looks to me like the edit, after we reported this listing was done right in the SERPs - right in the pack itself and not on the G+ page? But even more bizarre is the fact that the plain G+ page still ranks AND ranks with a different name and site.

OR NO I think maybe it's more like this: the Local part of the page and social sort of got split up. I think before the local part was suspended so stopped working. Then after we reported maybe the local was edited to show the correct name and site. The social stayed with wrong name and site - but the 2 even thought separate, are somehow still linked up in the back end. So when you view in SERPS you are seeing the correct name/site from the Local Maps listing - but when you click from SERPs or from maps, it for some reason goes to the bogus G+ listing instead???

Does anyone understand what's going on here???

Looks like they finally fixed? Not seeing any directories in local pack!

Did you click through to Brenners G+ listing from the pack?
Did you read all of post #12?

"Worked with someone from google on this and got a lot of insight on Monday at east. The listings were suspended but a bug was keeping them in serp results."

"I don't think reporting did anything. Ps."

Here is the discussion we are having on Gyi's stream which I think he started after I pinged him on my G+ post alerting to my post #12 above.

Phil just commented there about another weird one that sounds like similar problem.

I'm starting to realize that the SERPS are super buggy.

One of our clients was kept out of the local pack for around 4 months because they happened to move locations in a bugged out period of MapMaker (2 month window) where it wouldn't recognize the address change.

When they refreshed the system, the bug was gone and we ranked fine.

I think Pigeon bugged the spammy listings to be able to show back up in the rankings. We had talked about this before but I think now we're seeing the truth. I thought Pigeon just had refreshed all the spam but it looks like a bug took affect and is allowing them to all rank again.

Has anyone reported this to Google at the top? This can't be the only listing like this. I have quite a few to report myself.

Forgot to mention - I think it was a week or so ago, the borked Brenner listing finally dropped out of the SERPs. He's gone now.
You must log in or register to reply here.

A
What's the consensus in 2023 for service area businesses ranking in cities away from their physical address?