I know, I just told them there needs to be messaging in dash. How in the world would anyone know that's what they needed to do?
J

Hello and thank you much Chad and everyone else for your input. I see where I can individually select updates to resolve and then discard them but there is no ?select all? option once I filter for that ?amenities update? in the dropdown. The best solution (as was the case before with a similar resolve update issue that generated thousands of these-and as Linda noted above) would be to have Google ?wipe? all these ?amenity updates? out of my GMB accounts. The issue with mistakenly closing locations on Friday I can take up through another channel. I just need to get all of these MANY thousands of ?amenity updates? wiped out of my accounts. I hope this makes sense. I?ll look for an update Linda when you hear something back from G.
J

And Margaret is correct. You can discard the "Amenity update(s)" and then you go back and the "resolve update(s)" is/are STILL there so that functionality does not work......I'll sit tight and HOPE Google fixes this...

jrobbins said:
The issue with mistakenly closing locations on Friday I can take up through another channel. I just need to get all of these MANY thousands of ?amenity updates? wiped out of my accounts. I hope this makes sense. I?ll look for an update Linda when you hear something back from G.
Click to expand...

Hi James, I don't believe Google can roll back that update on an account by account basis. If enough people are having issues, they'd have to roll it back for everyone.

You said: "You can discard the "Amenity update(s)"

Not sure what you mean by discard, but did you do what M suggested and accept all?
J

Google was certainly able to “roll back” this issue previously. In fact, in just a day or so I had literally thousands and thousands of “resolve updates” that miraculously (and thankfully) disappeared. I am 99% certain this is a google back-end issue. Linda, feel free to email me directly or otherwise if need be but this is a big problem and I can’t imagine I’m the only one experiencing it. Further, I have no way of undoing these (as noted before) resolve updates.

Alerted Google to the latest feedback in this thread. Waiting to hear back.
J

One of the offerings that keeps getting auto checked is "in-store pickup." Is that referring to BOPIS and/or call ahead purchasing? And why does GMB keep auto selecting that and publishing it? We don't have BOPIS yet. #TGIF 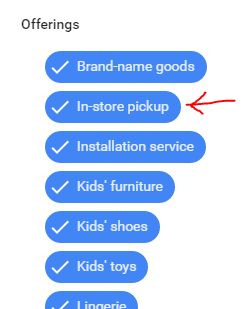 It looks like Google updated the help center article to reflect what everyone is seeing, and how to address it https://support.google.com/business/answer/6262887

Caleb said:
And why does GMB keep auto selecting that and publishing it? We don't have BOPIS yet. #TGIF
Click to expand...

Google should make it more clear, but I *think* they are adding most attributes to most businesses, not necessarily doing all the work to try to figure out what every feature every business online truly does offer. That's why they say you have to accept them all. Then edit to delete the ones that are not right for you.

I think they assume (and rightly so I guess) that if they just say: "here are some new attributes, add the ones that apply" - many accounts that are not proactively managed will just never bother to add them. There are tons of set it and forget it listings out there.

Again, just a guess, but that's all we can do when they don't spell things out is to speculate.

PLUS my big beef and I'm sure it costs them dearly in support time...
NO ONE reads that update list but a few of us in the know. So 99% of businesses and agencies will never see that advice and will just be calling support screaming and needing help to figure out what to do.

Google wants to take a look to see what's up. Could you PM me one of the accounts so they can take a peek?

Caleb, did you try what Margaret suggested above? Did it work?
If you are still having prob, please PM me one of your accounts as well.

Here's another help doc Google pointed me to, but I don't think it addresses this issue.
Sharing in case it's helpful on some level.

Am having similar trouble with some of my listings as other posters.

Let the listings sit over the weekend with accepted changes, and the changes not there. Some edits done after the forced accept show, some do not. As an example, on one listing was able to remove the forced wheelchair accessible, but unable to add teeth whitening.
On another listing, there were 5 forced accepted attributes, none of which show on the listing three days later.
And still another listing I've been able to get an edit into pending status, whatever that means.
So it's still a bit flaky, even if we follow the instructions :-/

And yes, Linda, totally agree the new GMB features page is good, but not known well enough. If G really doesn't want to do a banner message in the dash, at least create a to-do item in everyone's dash with a link to the page whenever it gets updated.
It's ironic on the page that they ask people to subscribe to the RSS feed to get immediate updates to the feed, when they killed their RSS product a few years ago. And srsly, how many biz owners are really going to know what an RSS feed is anyway? Would be far better to simply tell people to subscribe (via email).
J

Margaret, How do you "select all" to "accept" all attributes (even though I don't want to but I don't have an option because "discarding" them does not work! The ONLY way I see is having to check each box individually (nightmare for large accounts) then accepting a batch at a time....
C

Linda Buquet said:
Caleb, did you try what Margaret suggested above? Did it work?
If you are still having prob, please PM me one of your accounts as well.
Click to expand...

Seems to be working for now. I'll let it marinate for 24-48 hours and see what comes. Thanks.
J

Please see attached. This is a visual (with explanation) of the "amenity" problem plaguing all our accounts.

Hey James, thanks for PMing me an account for G to look at.

One thing before I do. And again I can't see this update so can't push buttons to see what happens.

In your screenshot, it appears to me you are trying to accept all attributes.
BUT on the left the updates are the same # so they should all be those attributes.

Have you tried clicking arrow by updates on the left to see if it will give you option to accept all?

I just re-read some of the techy explanation G gave and not sure I can share the whole quote.

But it sounds like I was right and what you need to accept is all updates - not all amenities.
Then once you accept all, you can edit as you need to for each location.
J

There is frankly just no way to "select all" when trying to accept all new "amenities".

I know you're not silly, but I'm going to lay this out JIC someone else is struggling with the same and they don't have the same level of experience as you.
Part of the reason as well is to see if your dashboard is behaving differently.

5 - You'll then get a popup window summarising the number of entries to be updated in bulk and give you an option to accept the updates or cancel. This is an all or nothing - you accept all updates on all listings selected, or cancel the process. There's nothing here to be done with the amenities.

6 - If you accept, you should see a little message at the bottom left side of the screen saying something along the lines of saving changes.

7 - The resolve updates should then disappear from the right of the listings. You can move on to the next page.

Whoa Margaret, thanks for that. Sound like exactly what we needed here.
You must log in or register to reply here.

To Display a SAB's Address or Not Display....THAT is the Question!

One Business, 2 Websites, 2 GMB Profiles - Should I merge Everything??