Google has something against megaformers and I don't know why!

I posted this in the Google Local Search Group's hot seat but haven't found solution yet.
So I thought I'd try here to see if any of you pros have any ideas. Here's what I posted there with an update:

This client is a megaformer fitness studio in Saratoga, CA. Their listing disappeared from the 3-pack for the query: ""Saratoga megaformer."" They are IN Saratoga and megaformer classes is what they do. No one is more relevant than they are, but Google has chosen to hide them. There are only 3 showing for that query and 2 for ""megaformer Saratoga."" Neither of those results have a link to see more.

If you search on "megaformer classes saratoga," or just "megaformer classes" if you are in Saratoga, Google shows 3 in the pack and now they are #1. It used to be if you clicked through for more, they were nowhere to be seen. There were only 5 showing at the time, and one was an hour away. But CORevolution is the only one in Saratoga and it was not there. So we've made some progress for the search with the word classes added in the query.

BUT where I sit now in San Jose which is about 10 miles away if I search for "megaformer classes," they are nowhere to be found in local but #3 in organic under two listings for Yelp. So their organic SEO is fantastic. In local if you click through for more, they don't show AT ALL, but studios with megaformer classes 45 miles away do!

They are great organically for those keywords and others. For "megaformer Saratoga" they are in position 1 and 2 with their yelp and facebook pages under that. So they own that page.

They had pilates as a category in GMB, but then changed it to ""gym"" in an attempt to get the listing to reset and show for megaformer. That didn't work. And it should have nothing to do with it anyway.

So they came to me for help, and I find it perplexing.

At a glance I can't see the problem. No duplicates exist that I could find. Their G+ page is not breaking any rules. I'm not doing the citation building as they insist on doing it themselves and I've already advised them to be consistent as I see different titles like "CORevolution" and "CORevolution Fitness." They also assigned the "gym equipment" category to their profile in YP and that could be part of the problem. Here's why.

And this brings me to what I think could be part or all of the problem. Corevolution is also the trade name of another company's piece of gym equipment. It bears the registered trademark on that website. This local fitness studio called COREvolution, however, tells me they have applied for the trademark because it's up for grabs.

Regardless, I'm wondering if Google is stumbling over the brand name especially because the megaformer really is a piece of gym equipment. So if Google thinks Corevolution is the equipment and not the local business, then it could make sense that it's not showing it in local if you just search for "megaformer." Having that category in YP could lend weight to Google's interpretation, if that's what it's doing.

But remember, if you don't type in "saratoga" in the query in San Jose 10 miles away, they don't show for "megaformer classes" either.

I told the client they should probably be putting more attention on getting the pilates queries since the megaformer is a knockoff of Pilates and hardly anyone knows what a megaformer is, nor do only a few search for it, anyway. And lots and lots are looking for Pilates. But they really want to show for the "megaformer Saratoga" query especially when they're competitors do. And in the future as the public becomes aware, that query could get popular.

So I'd like to solve it if not for anything else I can't stand to have anything get the better of me!

So what does Google or you see that I can't? Am I blind?

Any chance we can get more information on the business itself? Or is it this company: Megaformer Lagree Fitness Saratoga, It's Pilates on Crack!

@Heckler, yeah... Kat said the name of the studio was CORevolution, so you've got the right business.

I dug in too, and found about the same thing that you did Kat. There's a little bit of NAP issues with the name, and the name itself is interesting what with the first three letters capitalized. based on my interpretation at least of the Guidelines that's a little borderline, but I don't think that's ultimately causing any issues, just something I thought I'd point out.

Your name must not include:
Fully capitalized words (with the exception of acronyms) or unnecessary spaces.
Not acceptable: "SUBWAY"
Acceptable: "Subway", "KFC", "IHOP", "JCPenney"
Click to expand...

I also noticed while I was digging around that the street view was way off, which is curious since there's actually a well positioned shot that Google has, but the pin's in the right place, so eh. Either way, I don't think that's causing an issue either.

But you're right, I didn't see any issues that would cause problems. Most importantly, they're showing fine on my end at least for pilates saratoga CA, so I don't think it's a local penalty that's hitting them. Strange. I'll be interested to see what others have to say. The one thing that does jump out as interesting, like you said... their brand name is split, and they don't get a knowledge panel for their brand name, only brand name + city. They're all the way down at number 7 even for a brand name search. Again, not sure why that wouldn't hurt them in a pilates search but it would with a megaformer search...

It's interesting for sure. I see y'all are using the local business schema, but maybe (if Google is misunderstanding what the entity is) adding more specific schema for a gym would help Google figure it out.

also - what are the chances Google is filtering it because the main page title has 'Crack' in it?

Crack - I'd start there. Get rid of it

James Watt said:
Again, not sure why that wouldn't hurt them in a pilates search but it would with a megaformer search...
Click to expand...

maybe because that trademark appears to be associated with gym equipment, which the megaformer is. That doesn't mean Google should be tripping over that, but anything is possible in code. All it takes is a forgotten if statement.
K

CodyBaird said:
Crack - I'd start there. Get rid of it

Sent from my SM-G900V using Tapatalk
Click to expand...

Seriously? Are you kidding?
K

James Watt said:
@Heckler, yeah... Kat said the name of the studio was CORevolution, so you've got the right business.

I dug in too, and found about the same thing that you did Kat. There's a little bit of NAP issues with the name, and the name itself is interesting what with the first three letters capitalized. based on my interpretation at least of the Guidelines that's a little borderline, but I don't think that's ultimately causing any issues, just something I thought I'd point out.
Click to expand...

That's an interesting catch James. But they show #1 for "megaformer classes Saratoga," so I don't think that's it.

I'm pushing them to clean up their NAP because until we get everything clean, it may be hard to troubleshoot.

I see the homepage when I add in the filtered results as about 20ish on the page. I don't see it in the top 100 normally.

Woah, that's a great catch Joy, very interesting. Though if that was the case, wouldn't you expect them to not be showing in any 3-packs? The fact that they're showing fine for pilates and some other keywords raises some questions for me... but you're right, there's definitely something a funky going on there. Another diagnostic check for my bag of tricks...

Ah, that probably answers that. They're only showing with city and state included, and I know that's a different spin on the algorithm serving up those results. They're not showing on any of the 4 pages for pilates in the link you gave. Definitely learned some good new stuff today, thanks Joy!
K

I'll give that a try, Joy. I gave them instructions today to create a page specifically about the megaformer, but I'll have her hold off on this and do what you suggest.

FTI, I'm in the area, actually in San Jose right now, but I'll check in Saratoga when I get home. I see exactly the same results with filter on or not using an incognito window in Chrome. So I don't see what you see.

I see them #2 in local, nowhere in organics for this query (but not surprising): https://www.google.com/search?query=pilates&num=10&near=saratoga, ca&gws_rd=ssl&pws=0&num=100

I know it sounds crazy but Linda figured out a ranking puzzle here a while back for an attorney with "child pornography" in the text because he defended those cases and google was keeping him from the results.

I'm home in Saratoga now and this is what I see:

For https://www.google.com/search?query...10&near=saratoga, ca&gws_rd=ssl&pws=0&num=100
No presence in local, class page #1 in SERPs, homepage nowhere

It appears that Google is using my location for the SERPs because they are different here. In any case, that homepage is filtered out now, but not when I'm in San Jose. That's really odd.

Check the screenshot. No one is going to have a problem finding megaformer classes in Saratoga if that's what they search on. 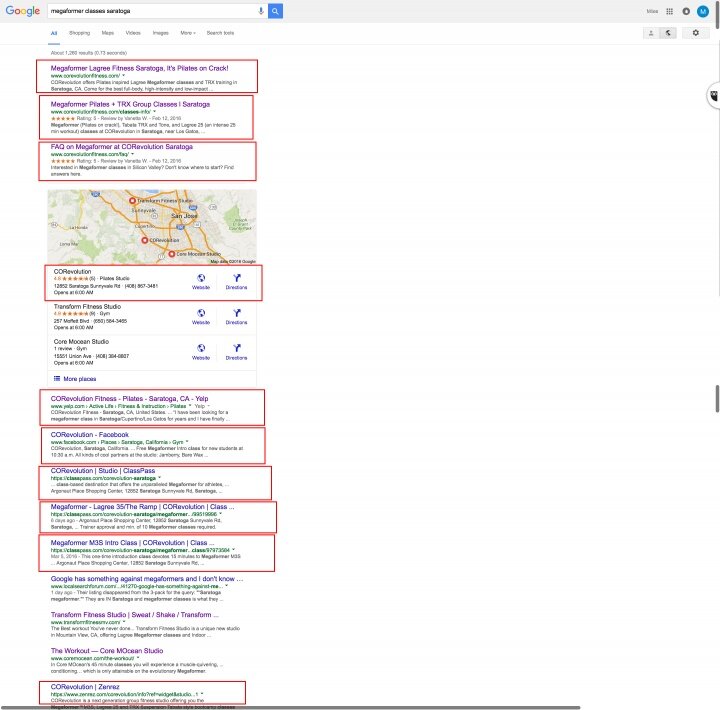 yeah, but others rank for just "megaformer."

This is my thought.

corevolution=fitness equipment CorEvolution ? The Best in Home Exercise Equipment ? Easy to Use

That's clearly not the way Google should be thinking, but clearly something is tripping it up.

So this is why I want them to clean up their NAP everywhere and get that business name consistent, and remove the category "gym equipment" from YP and elsewhere. If this in fact is the problem, they may never fix the problem, but they tell me they used to rank fine for it. However, that's before they started their problematic citation building.

Man, I was sure that Joy had it, looks like the website address change didn't fix it.

The fact that Google pulls up the local knowledge panel for CORevolution saratoga makes me think Google's not confused, they just (probably rightly so) expect that the majority of people searching for CORevolution are interested in the exercise equipment, not a local business in Saratoga California. If cleaning up the NAP and making those category changes on 3rd party citations changes it though, definitely post an update.

If they just changed the web address now I doubt it would update instantly. It almost never does. I would wait a week.

Another thing I've directly seen impact the 3-pack is the city in the title tag. Although this one includes Saratoga, I'd change it to Saratoga, CA since there are other "Saratoga"s in the USA.

I literally had a client once who dropped from the 3-pack when I changed his title tag to Long Island instead of City, State.
You must log in or register to reply here.

Oct 3, 2022
Ken_R
K
I
Branching Out to New Locations without Physical Address

Being filtered? Nothing appears at that address though.