I have an issue I am hoping you can help with.


I have a business which is UK based and one of our main keywords is “lorum manufacturers UK”.


When “lorum manufacturers UK” was searched in the past, the 3 pack/map stack would appear at the top of results, no matter what location the search was made in.


We have a competitor who uses an exact match business name to the keyword - their GMB name is ‘lorum manufacturers UK’.


In the last couple of weeks, when someone searches “lorum manufacturers UK”, the 3 pack doesn’t appear. Now only one, large local result appears in place of the 3 pack.


So the only local result a user will find, is the one of the exact match name company, even though there are many other relevant companies.


The local result appears so high and so large, that we have seen a massive drop in traffic for local results. Down from 500 clicks in January, to 80 clicks in February.


I’ve tried using the redressal form, because this company is actually called something totally different. I’ve also tried the suggest an edit to change name on GMB. They have bought an exact match URL though, which is, I assume why redressal and suggesting edit is not working.

Showing 1 company, just because they have an exact match keyword name, doesn’t represent user intent - the user is missing out completely on other results which would be relevant to them.


Can we get Google to show the 3 pack again, like it used to? Or is there anything we can do to get Google to understand this is a spammy result?


This has to be spammy, otherwise everyone would create GMB profiles with exact match names and dominate results.

- Competitor has purchased an exact keyword match domain and created a GMB with the keyword as the business name.


- When the keyword “lorum manufacturers UK” is searched, their local result shows, instead of the map stack


- We have tried a redressal and name change, to no avail.
Sort by date Sort by votes

If it's been 2 weeks, I would send it via the Redressal form again. Getting the name corrected is your best bet at getting the 3-pack back.
Upvote 0 Downvote

What I would suggest is posting a thread over at the Google my business forum. Create a Google doc with all the details including your case ID from the redressal form submission.

Thanks for the replies @JoyHawkins and @Colan Nielsen

Will definitely try the redressal form again. Can you just confirm, this is the correct place to post on the GMB forum? Sign in - Google Accounts

One thing we're trying to avoid is the competitor knowing who we are in this - although what they're doing is not correct, we don't want them to know it's us trying to stop them as you can probably imagine. That would be my only reservation about posting on the GMB forum and using the redressal form submission. Would it still be taken seriously by Google if I were to post with a different account do you think?
Upvote 0 Downvote

Thank you for the advice. I have posted on the GMB forum.
Upvote 0 Downvote
T

I posted to the GMB forum yesterday, and this morning I woke up to find that my post had been marked "Off Topic".

I've put everything into the below Google Doc - the first page is what I posted to the forum as the title, body and category. The second page onwards is all of the evidence etc.

Can anyone advise if there's anything I can do to avoid this getting marked as off topic? Is policies and guidelines the correct category? Really looking to get some help with this. 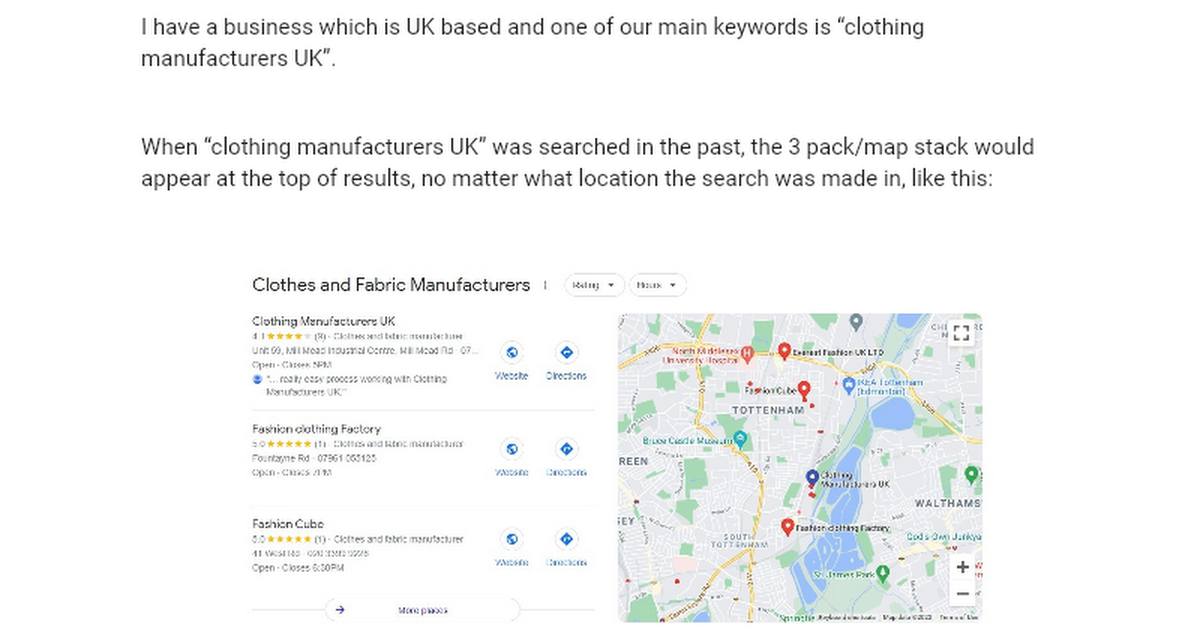 Hey @trainstyle - repost the thread using the advice listed here and you should be good.

The Google Business Profile Forum is peer-supported and managed primarily by a group of Product Experts that have the ability to escalate issues and cases to Google. You can see a list of the current Product Experts here. It’s best to post on the forum if you want feedback on a particular...

Thanks @JoyHawkins, I will do that!
Upvote 0 Downvote
T

It's been 2 weeks now since I last submitted the redressal form. I've also posted on the GMB forum but haven't had any luck so far. Would you still suggest the best bet would be to re-submit the redressal form?
Upvote 0 Downvote

There is no need to post here. I have answered you on the forum. I have escalated it to Google and it can take several weeks for me to hear back.
Upvote 1 Downvote

Hi everyone, a quick update, the company seems to have disappeared from GMB today, so I just wanted to thank you all for your help, especially you @keyserholiday
Upvote 1 Downvote

Yes, Google advised me that the profiles were removed.
Upvote 1 Downvote
T

Thanks so much for that, it's really appreciated. Just one more question if you don't mind... If the profiles re-appear, what would be the process? Just alert Google to them again?
Upvote 0 Downvote

Yes, post on that community thread.
Upvote 1 Downvote
You must log in or register to reply here.

C
How to deal with misuse of GMB listing

C
Combining Keywords in Page Titles? And Near Me/Near You Madness!?

Suggestions for Local Pack Rankings of a Business for New Location