Want to Learn More about Google Maps/Google My Business? Read This!

Bryan Seely reached out to me and let me know he just re-released his book on Google Maps spam. I read this book in 2 days because I couldn't put it down and it seriously opened my eyes to the tactics that spammers are using to game Google's system and create fake listings that rank very well, very fast on Google Maps.

Anyone who is serious about learning Local SEO needs to read this book. It really opened my eyes and has helped me fight & identify spam so much better.

You can get his book on Amazon for only $14.99 here. There aren't many books published about our industry and this one is truly amazing because Bryan talks about how he created 3,000 fake listings for a business who wanted to sell leads to legit businesses. He explains all the tactics that he used and how they worked.

Sounds like an intriguing book. I just placed an order. Thanks for the head's up!

Let me know what you think after you read it. My mind was blown

Have you read it yet?

Thanks Joy! I agree, this is a must read for every local SEO. I read it when it circulated digitally, and it is very much worth the price to order now that it's available in print.

No, I'm so backed up due to these hand issues. I'm still trying to catch up with mission critical stuff. But based on things you've said, I know I need to! (And would be enlightened.)

Note: you can read this for free if you have a Kindle Unlimited membership. If you don't have one, you can get a 30-day free trial and then read it for free.

I have it in my hot little hand today - the opening quote about the Locksmith was mind blowing. Really looking forward to this!

What blew me away when reading Bryan's book was the bit about reviews spamming - I did a search and many of those are still in circulation today!

It's sad that he has had to resort to publishing the methods. On the other hand, it has been incredibly enlightening. What surprised me in the digital edition was the simplicity of the activity. It's not rocket science, it's just good-old-fashioned user testing (done for not-so-good reasons).
Off to get his new edition now.
Thx Joy!

After reading the book, it's not surprising that Google made some of the changes they did (user approved map maker edits, no PO box, etc) given that the FBI got involved and gave them a stern talking to. That was a crazy chapter, I can't imagine doing something like that, but it was a great publicity stunt.

I haven't spent much time on the warrior forum in a long time, but it's interesting remember all the stuff that used to be out about lead gen. There's some interesting ethical questions there that I hadn't thought much about. In the industries I've been spending more time in lately (photography related) top ranking businesses in the 3-pack are often pretty organic in the truest sense... they're there because they put out great stuff, have strong community ties, and have a really solid base. There's still some outliers (businesses called city + keyword, I'm looking at you) but a lot of the companies getting exposure seem to actually deserve it the most, potentially without even having had heavy SEO help in the first place. In some ways, we're just as much of an artificial influence in the local ecosystem, and having someone like any of us behind the wheel would definitely make it tougher for a bootstrapping business owner to try and learn the ropes and see their own business getting good exposure.

I agree that lead gen is an ethically questionable business model, and it's outright wrong if you're using bait and switchs ads or tying in with maps in any way, but there's still some interesting food for thought there when thinking about how even white hat SEOs affect the playing field. Either way, good read, I think everyone should check it out.

I believe a lot has been done on the MapMaker side which is why the pattern I'm seeing lately is all done via GMB. Basically the most common thing I see currently is a spammer finds an old listing with a lot of ranking juice (a custom description, some reviews etc) in any category. They claim the listing, change all the information, hide the address, then once it's verified they delete it in GMB. This causes the listing to float around unverified but not visible on MapMaker since they hid the address. So the mappers don't see it and fix it and GMB doesn't notice it since it's not verified anymore. It's kind of genius the way these guys find loopholes but I believe the whole "hiding of addresses" is causing more harm than good. It just allows spam to be hidden.

SABs should still have a full edit history the way MM does that the general public (including mappers) can see and edit. Currently you can't even tell if a listing has been hijacked if it doesn't have reviews or a custom description. That's scary. Very scary.

I completely agree, in the industry I've been spending most of my time in, about 30% of all the businesses are SABs, and it's really obnoxious not to have MM available for diagnostics and history. Even more of a problem with hunting down competitive spam, as you mentioned.

I'm a little confused though, how does a company manage to claim those kinds of listings that you mentioned? If they're on the hunt for random high ranking unclaimed listing, how do they claim it? Push an address change edit through map maker first? I've definitely been seeing more map maker hostile takeovers lately, it's an ugly world out there. All the more of a reason for business owners to take steps to protect themselves.

I need to start documenting more examples so I can show more Here is a good one I took a screenshot of a couple months ago.

It was live for about 2 weeks before a user reported it on the forum and it got reverted. 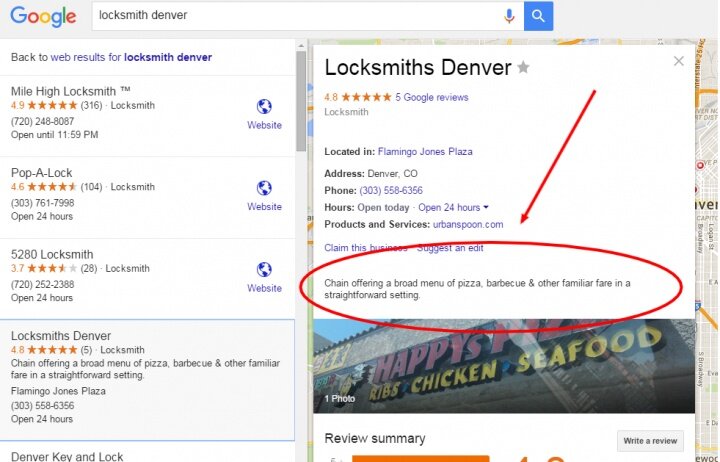 It's ridiculous that a listing can change this much without detection.

How'd they claim it though? That's my question. Since it says that Google changed all that info, I assume it was done inside the GMB dashboard, but I can't think of how they'd have claimed it in the first place. You think it was that trick in Bryan's book, where they set up a mail forward with the post office temporarily?

Either way, that's crazy, and I've definitely seen a number of similar cases myself, so I know it's a huge thing going on right now. I feel like this would be really easy for Google to algorithmically catch if they felt like it too. Maybe manually flag if the categories, name, website, address, and phone number are all changed. I can potentially see a real business wanting to do a rebrand, but the categories shouldn't change so much in any real case, especially not to locksmiths.

Just for fun, I thought I'd call a plumber whose listing just got hijacked. They were so clueless about it and had no idea. They had their guy at Yellowpages set up a brand new listing for them (so now they have 2) because the one that is currently hijacked lists a different business name and phone # yet has all their photos and customer reviews. It's sickening that SMBs are clueless about this fraud that's going on behind the scenes. That's what I loved about Bryan's book - he's trying to shed light on a really bad crime that no one knows about.

I just called the phone # on that one example - it's disconnected. So my guess is they got control over the phone number, verified it, and then changed everything. I am going to check a huge list I just sent to Google once they restore them all to see if I see the same pattern.

I'm having dinner with Bryan in a few weeks in Seattle. I'll show him these examples and see what he thinks. I'm not an experienced spammer

Right on. Well, I'll be interested to hear if any cool stuff comes out in the conversation. I should get in touch with him too, I visit Seattle semi-regularly, and the book definitely inspired me and changed how I looked at some things.
You must log in or register to reply here.

W
How Can I Make A Google My Business Profile For A Friend. Gmail Account? How?