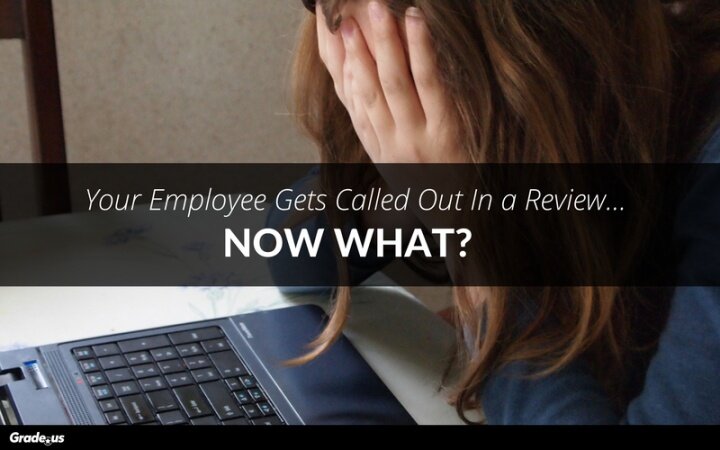 Your company has just received a negative review. One where the customer says some pretty terrible things about one of your employees.

Your employee is an all-star as far as you?re concerned. On the other hand, your customer may be right. Both your employees and customers expect you to pick a side.

Get it wrong and you may do lasting damage to your business, customer and employee relationships.

Customer vs. Employee: Whose side do you take?


Side with customers and you risk creating anger and bitterness in the ranks. Team morale drops as employees start to believe you don?t care about them.

On the other hand?

Side with employees in your rebuttal and you make a bad situation worse. You infuriate your customer and you send a message to prospective customers that you simply won?t take care of them.

It?s a no win situation.

If you?re inexperienced you do the ?smart? thing

You ignore, evade or hide from the conversation. You do everything you can to avoid facing the problem. On the surface that seems like cowardice.

The last thing you want is to end up in a toxic altercation with your employee and your customer. That would be terrible for all kinds of reasons. Saying nothing is easier when you don?t know what to say or how to say it.

But, in many cases, it?s also the wrong move. Because your silence communicates a message to your employees and customers ? a message you don?t get to control.


Your silence is a breeding ground for bitterness and resentment ? on both sides. It seems like the smart thing but it actually encourages employees and customers to fill-in-the-blanks.


Make a stupid decision. Start a fight instead.

When people hear the word ?fight? their minds tend to go to dark and unpleasant places. We think about abuse, fear, dysfunction, toxicity.

When we fight, we focus our attention on a ?who? which inevitably leads to disaster. What if, instead of fighting a who, you decided to fight a what?

Focusing on the ?what? creates freedom.

Have you ever had a customer or client with an employee that got named in a negative review?

How did you or your client handle the situation and what was the outcome?

This is REALLY a hard one Garrett, so I'm glad you covered it.

I've been checking out apartment reviews lately and OMG some of them are so bad in this regard.

"Sharon the manager is a witch". "Sharon will just rip you off!" These went on for years!
So out of curiosity I called the place & asked for Sharon. No longer there.

Thanks, Linda! I agree. This topic is such an intimate one, because you have two really important sides of the coin and you can't dismiss either side. It needs to be handled very delicately.

That's why I'm curious to see if anyone else in the forum has experienced this and how did they or their client handle it.

As I mentioned on Twitter when sharing Andrew's thought-provoking piece, he really waded into the deep end of the review management pool. I think this is a brave post on a subject about which I've seen very little coverage. Impressive!

I agree 100% with his advice that as the owner/responder, it is possible to side with both the employee and the customer. I really liked seeing this position advocated.

Where I'm not sure I agree is with the suggestion to monitor but not respond to toxic people. Of course, in a personal setting, this is smart advice, but if the business remains silent on a nasty review, they are leaving it up to future consumers to interpret the reviewer as toxic. The consumers may not see it this way, and could decide the business is ignoring complaints. Given this, I'd advocate leaving some form of response to the review, preferably one with facts about the transaction (if there was one). I'd be pleasant and professional, because, while you may not ever be able to please the toxic customer, you can certainly create a favorable impression of your company's professionalism in the minds of all future consumers who will see the owner response.

Thanks for your feedback and kind words.

It's possible we're arguing semantics here. When I mention "toxic" customers I'm talking about a very specific type of person/post. The kind where respondents are simply focused on hurting you.

These posts typically are:

If a customer delivers credible feedback that's slathered in abuse with a heaping side of bitterness and resentment it still warrants a response. If customers are venting in an unhealthy fashion but there is truth to their complaint or a misunderstanding a response would be wise. If they lie on you, you can and should set the record straight.

I advocate avoiding sadists, trolls and ragers simply because they're experts at starting a fight. They use the drama triangle to make a bad situation worse.

The interesting part here is the fact that these toxic people aren't immediately obvious. More often than not you'll end up talking to them before their bad behavior presents itself. At that point, or if you see it before then, I advocate exiting the conversation and allowing this person to "burn out."

Notice this isn't ending the relationship. It's waiting for their behavior to return to appropriate levels. Avoidance doesn't have to be permanent. It all depends on them.

I LOVE that Miriam got a Twitter discussion going, then brought it her to discuss in more detail.
Double love it that Andrew came to respond & clarify!

What are YOUR thoughts about this?
Anyone ever had a situation?

Hi Andrew!
I'm truly delighted to have the chance to converse with you. I've been reading your work at Grade.Us over the past year or so with such interest. Hello there!

It's very good of you to come and share further thoughts on what you consider a toxic reviewer, and in which scenarios you'd advocate avoidance. I can see the sense in what you're saying, and in an ideal world, no business owner would have to cope with awful situations like that.

Now, of course, if the reviewer really goes overboard, that would be grounds for review removal, according to Google (https://support.google.com/business/answer/2622994?hl=en):

Keep it clean: Don’t use obscene, profane, or offensive language. We’ll also remove reviews that represent personal attacks on others

If a business owner ran into that situation, direct action to request removal would be to advisable rather than inaction, and that seems to be a good match for what you're describing as a toxic reviewer. So, if the review is along the lines of "Jim is a bleep bleep bleeping turkey who bleep bleep bleeps people's cars they bring in for service," then that's a guideline violation that should be reported. A recent post by Jessie Low of Whitespark could be helpful for any business owner who runs into this awful scenario:
https://whitespark.ca/blog/remove-fake-google-reviews/

Like Jessie mentions, I'd advocate responding to such reviews along the lines of,

"We were extremely concerned to receive this review, and unfortunately, have discovered that it is a violation of Google's guidelines which prohibit obscenities and personal attacks. We are working with Google on achieving removal, and sincerely apologize to all of our customers for encountering foul language here."

And then, hopefully, you'd achieve success in removal afterwards, but at least there would be some response from the owner so that consumers aren't left in the dark as to what's going on. That's the part that really concerns me: a toxic review with no owner response guidance for future consumers as to the prohibited aspects of such reviews.

Again, so glad you're willing to discuss, Andrew. Maybe someone could find an example of such a review, and the community here could write practice responses to see how each of us would handle the scenario. That could be interesting, and I'd really love to read sample responses from anyone here
You must log in or register to reply here.