Are we losing the Page Speed battle? And if so, who are the losers?

Google has been encouraging publishers to increase their web page speed for at least ten years. Google has created resources for helping publishers make their sites faster. Yet a comparison of year over year metrics shows that web pages are getting slower.

HTTPArchive data shows that the average first contentful paint for mobile at the beginning of 2019 was 6.3 seconds. It took an average of 6.3 seconds for a site visitor to see content while viewing in a mobile device. 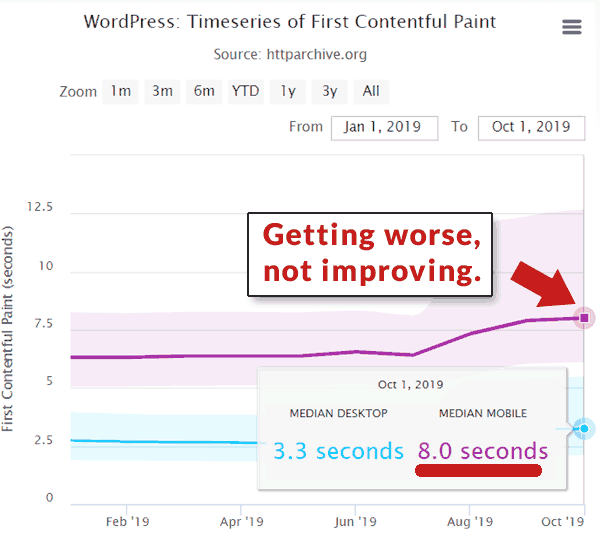 By October 1st, 2019, the mobile experience was slower.

The average score for mobile went up by nearly two seconds to 8.0 seconds.

According to Google’s developer page, things like render blocking external stylesheets and scripts and other factors related to minizing file sizes can impact the First Contentful Paint metric.

This is what the developers page says: First Contentful Paint | Tools for Web Developers | Google Developers

The SEO community is aware of Page Speed, probably because it’s a (very small) ranking factor and because of the well known benefits such as increased revenue.

But for some reason, page speed keeps increasing. One would think that the carrot of higher conversions would be enough. But it’s not. The takeaway here is that there may be an opportunity to take advantage of slow competitor speeds by besting them with a faster website.

It may help increase sales and brand loyalty and all the rewards that come with that.

The takeaway is that while Google is losing the battle for increasing the speed of the Internet, it’s the web publishers who are losing the revenue war by not trying hard enough to focus on page speed.
Click to expand...

I think the big issue dragging sites right now is that they're designed as Responsive (which is what we've been encouraged to do). The problem I'm seeing is that so much bloat is added to a single CSS file to cover all the various screen sizes, then inline edits, then javascript/jquery and the rest of it slows it down that bit more.

I've recently been taking WordPress sites and saving a full copy as a static site. We can still use all the power of WordPress but it's static that's served to the user and is anywhere from 3-5 seconds faster as it's not querying the database to build sites etc.

The push for an all inclusive design I think has hurt overall speeds on mobile for many people. They just don't optimize images for mobile, or serve different images to mobile vs desktop and instead load a 2MB image for no real reason.

That's true although there are ways to mitigate that. Still, no matter what you do, mobile speeds are always lower in my experience, sometimes considerably lower.

Mobile carriers may have increased maximum download speeds in the past three years but that is easily overridden by location (how far to the nearest cell tower? how may buildings or trees or hills are in the way of that tower?), traffic density (number of users hitting that tower), and even weather conditions and atmospherics.

Devices themselves can play a part in this as well, I think. Software, available memory, etc can cause slower download speeds, even with the best connection... Some also connect better than others to the available network.

Not everyone can afford to fork out the $$ for a new phone every year. I personally refuse to, and when I do buy a new one, it's usually the best "budget" phone I can find. I also live in a rural area with all the network issues that brings.

I think in building a site, there is kindof a tightrope to walk for mobile. There needs to be a balance between building it for people who are used to having the best (better devices, better network speeds), and so expect a more robust experience, and building for people who (for whatever reason) have more challenges.

It's been a long time since I've built a site, and I do not envy developers.

I'm very fortunate to know a developer who is great at improving page speed. He does things like choosing a caching solution based on server configuration, enqueing scripts, etc. Best of all, unless it's a large ecommerce site, he charges a flat $500 fee. And sorry, but no, I'm not sharing his name!

djbaxter said:
Google has been encouraging publishers to increase their web page speed for at least ten years.
Click to expand...

Related: The Quest for Speed
D

Now with 5g mobile internet the game will be on mobileside

Deadlining said:
Now with 5g mobile internet the game will be on mobileside
Click to expand...

First, 5G needs to be made available and affordable in your area (it isn't in Canada yet and I don't think it is in the US).

Second, you need to make affordable mobile devices capable of 5G that will convince consumers to upgrade.

I think we have a while yet before this is a reality we have to deal with. There are still a sizeable number of active mobile devices with a top speed of 3G.
W

The Google Test My Site page is saying that my site is slow, it takes 6.1 seconds. I understand that this isn't optimal, but I also think that if someone is looking for a contractor and decided to click on my result to go to my website, that they will follow thru even if it takes a few seconds to load.

My main concern is if Google is putting me further down the listings due to the speed being slow.

What platform do you use on your website? If I recall, is it Joomla or Drupal?
W

djbaxter said:
What platform do you use on your website? If I recall, is it Joomla or Drupal?
Click to expand...

Joomla. Biggest mistake ever. I wish I used Wordpress.

But at this point, since it is only a small website, I wish I could just change it to HTML pages like it originally was before I wanted to get all fancy lol.

Maybe you could convert it to WordPress? I recently wrote a blog post about my own research and conclusions regarding how to significantly speed up WordPress sites... made a big difference for my sites. 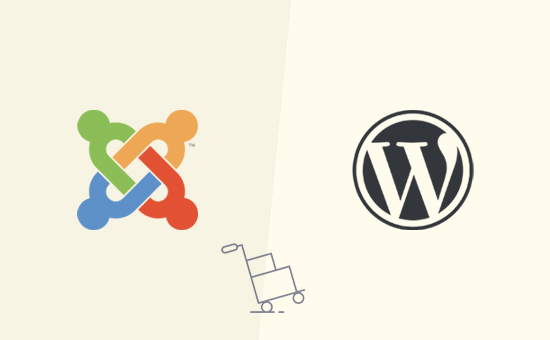 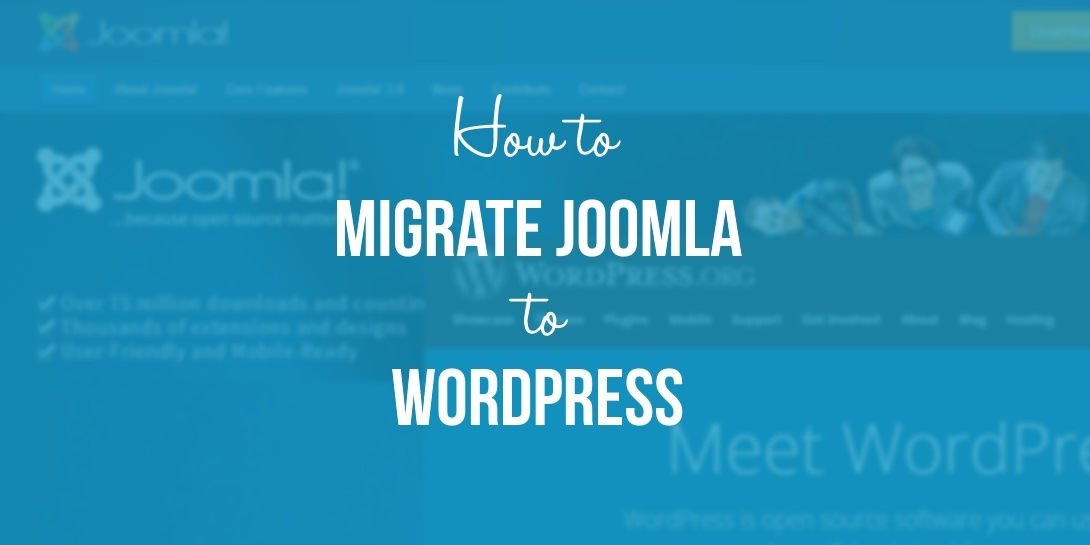 How to Migrate Joomla to WordPress (In 3 Simple Steps) | Themeisle

Joomla is a fantastic CMS, but some of you might feel more at home using WordPress. If that's the case, follow our guide on how to migrate Joomla to WordPress. We cover all the steps required and illustrate everything via handy screenshots. This beginner-friendly guide can be followed by anyone. 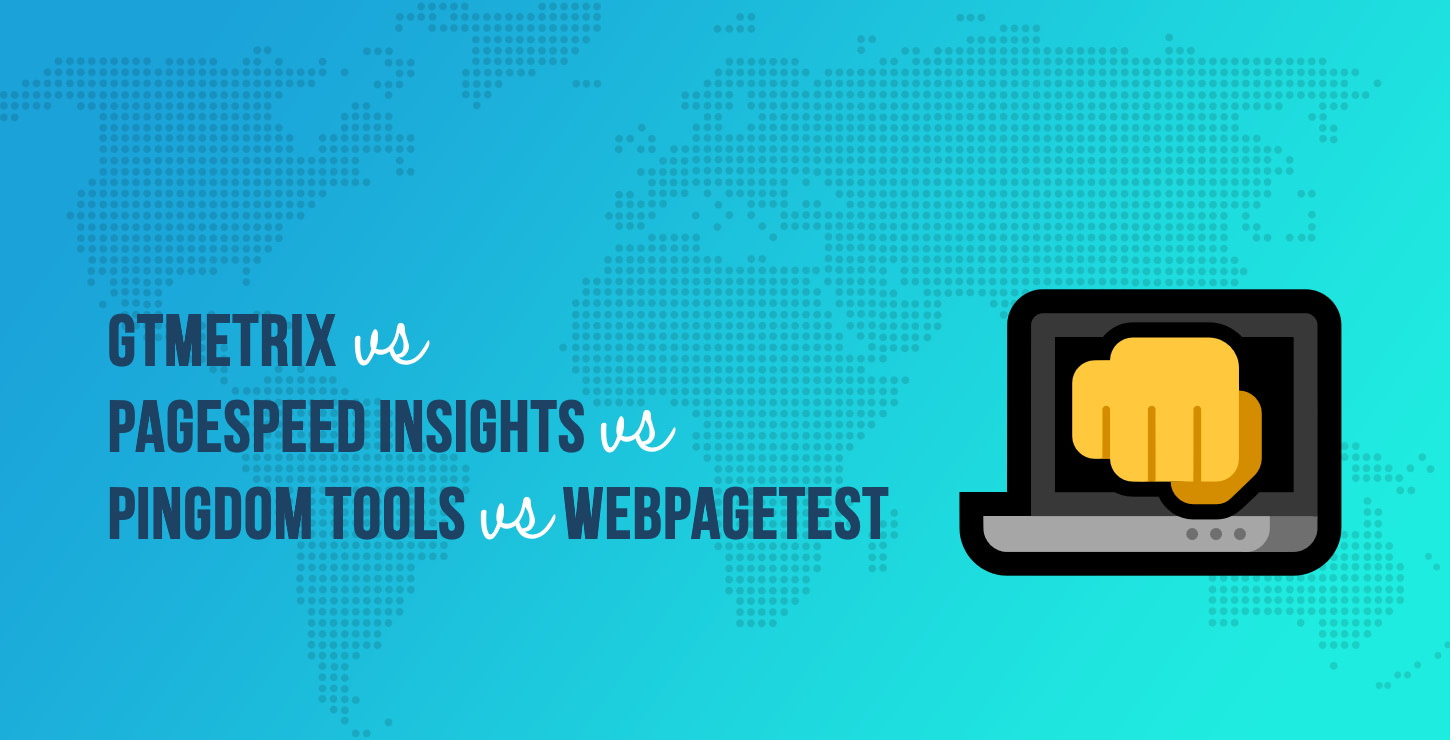 GTmetrix vs PageSpeed Insights vs Pingdom Tools vs WebPageTest

Here's a comparison of GTmetrix vs PageSpeed Insights vs Pingdom Tools vs WebPageTest. Find out what the best website speed check tool is.

Kind of funny that they liked Pingdom the best. In my experience, Pingdom almost always shows the fastest load time of any of these tools. I don't trust their results. It's important to remember that these tools all show page load speed based on a single session at that moment in time. The only broad, real user numbers I know of come from Google Analytics site speed section and Google's CrUX data.

I can't disagree. I generally use multiple tests to see where they agree, as much as anything.

Also note the summary in that article:

In conclusion, I’d recommend the following:

especially that BEST FOR SEO part. I wish Google's own tests didn't disagree with one another, though. Otherwise I might endorse it on the basis that if you want to rank in Google you should probably pay attention to what Google pays attention to.

Rich Owings said:
In my experience, Pingdom almost always shows the fastest load time of any of these tools. I don't trust their results.
Click to expand...

djbaxter said:
I wish Google's own tests didn't disagree with one another, though.
Click to expand...

Same here. I quit looking at Pingdom results a long time ago. Also, I'm never certain which Google test to pay the most attention to.

Tim Colling said:
I'm never certain which Google test to pay the most attention to.
Click to expand...

Ditto. Some things I've started paying more attention to, as important user experience metrics, are first paint, first contentful paint and first meaningful paint. But sometimes it's hard to move the needle on those metrics.

Wordpress has made it so anyone can build a nice looking site but because people don't know what they are doing, they just add more and more plugins, which use more and more resources, which slows the sites down.

Quite often you will get asked about why sites are slow, login to their Wordpress admin panel to find 20+ plugins being used

UKSBD said:
Quite often you will get asked about why sites are slow, login to their Wordpress admin panel to find 20+ plugins being used
Click to expand...

Or installed and not even active...

Or installed and never updated even though updates are available...

I've been in web development since 1998. Back when we hand-coded everything - and built e-commerce sites with PERL and cgi. We built websites back then with internet users using a 14K modem. Small images, usually progressive jpegs.

From MY perspective, I am seeing a LOT of new "web developers" who have no clue. Like Conor wrote above, regarding 2 MB images, I see a lot of this useless image file size on websites, and web developers doing things to try to "make a site look good," but in reality, it's just a pain for visitors to find the information they are looking for.

I recently took over a site that was built by some guy who does video and decided to call himself a web developer - he built the site with Divi (in my opinion, unless it's changed recently, a totally bloated and site speed slowing tool), and EVERY image on the site was over 2 MB! There were about 12 images on the front page alone. Instead of resizing them and optimizing them, he had just used the original images.

The home page literally took over 20 seconds to load on a fast network.

There are far too many lazy "web developers" (and to call them that is really not correct) who don't know anything about optimizing web sites. And this is true for lots of optimizations including SEO, optimizing for accessibility (heck many so-called web developers have no clue that in Ontario, all websites in the Province will be subject to their accessibility regulations) by next year.

Website speed is not only important for SEO (sure, it's perhaps a minor bit), but also for data costs as well. When you'e got a web page that means downloading tons of MB's of files, that's expensive to the end user, on mobile.

Further, where I live, there are still many people outside of town who do not have access to high-speed internet. Many web developers totally forget about this fact, or don't care.

I have my own solutions that work well including simply creating static sites where that works. But image optimization is a big thing that many people today don't seem to bother spending the time on.
Last edited: Feb 24, 2020
You must log in or register to reply here.

How The Web is Really Built