Found an interesting post on Yelp from Daniel "UYE Wizard" B. a YELP Elite reviewer.

Google AT A MALL with a booth full of swag and REVIEW STATIONS???
Offering swag in exchange for 10 reviews???

I was in San Francisco last week and went to Westfield Centre, SFO's nice downtown mall. I walked through one of the main entrances on Market Street and right there to greet me was a stand with Google swag -- t-shirts, water bottles, etc. Standing next to this display was a young Google employee wearing a Google+ t-shirt, politely greeting each customer who walked through the doors. Behind him were shelves with more swag, swanky couches, and thin laptops. Some ordinary looking people were on the couches, focused on the laptops, and typing away.

I wasn't interested in anything Google was trying to sell or any personal info. they may have wanted from me, so I just walked right past the stand. On second thought, I was curious what Google was up to, so I made a U-turn back to the stand and inquired about the merchandise on display. The Google employee asked me if I had a Gmail and/or Google+ account, to which I replied yes. He then said if I wrote 10 reviews on Google+ Local (a minimum of 3 sentences per review), I could take any one of the Google-branded items on his table. I thought about it for a second, but then told him it was too much work. I was actually considering doing it.

So this is one way Google is trying to populate Google+ Local with reviews and gain ground on Yelp?
I thought it was interesting.
Click to expand...

I wonder if all the reviews are legit and for places these people have actually been to? Or if passerbys are just making stuff up and writing fiction to get their G swag? I'd be hard pressed to think of 10 local businesses I'd been to and wanted to leave a review for right on spot.

Hmmm... I also wonder if those reviews will get filtered since they are all coming from the same IP???

Isn't this exactly what Google told small businesses NOT to do? I don't understand the hypocrisy... Normal businesses do this, and reviews get removed... Then Google decides they need to get more reviews to compete so, they create a review station and give away an incentive to write a review.

"
We also discourage specialized review stations or kiosks set up at your place of business for the sole purpose of soliciting reviews. As a reviewer, you should not accept money or product from a business to write a review about them. Additionally, don’t feel compelled to review a certain way just because an employee of that business asked you to do so. Finally, don’t post reviews on behalf of others or misrepresent your identity or affiliation with the place you are reviewing."


Specialized review station... check (although not at a business where a review is for... so... grey area)
Accepting products to write a review... check (once again not from a specific biz.. grey)
Misrepresent identity... possible since it could be a business owner or an employee writing a good review since Google's giving away swag.

If I write 10 reviews can Google send me a water bottle?
​

Ya at 1st glance it seems like hypocrisy but it's kinda different.

Me bribing people at a review station at MY business to review MY business is what they don't want.

But I bet if the Chamber did a contest to have people review local businesses, for example, it would not be frowned on. It would be impartial as opposed to a business owner trying to unnaturally inflate reviews for their own business.

The parts that are interesting to me about this are:

1) That Google wants to increase reviews or their visibility in the review space badly enough to set up a Mall booth???

2) I would wonder about the quality of reviews and if they were legit. Some people would do anything for a buck... or for some G swag.

So unless Google is telling people they MUST review businesses they've actually been to, then it kinda seems like they are going after quantity over quality. PLUS the guidelines say reviews need to be legit based on 1st hand experience.

Mamma Mia, Linda. Great catch. And review stations thrown into the mix, no less. 'Do as I say, not as I do," said Google. Fascinating.

"a minimum of 3 sentences per review"

keenan said:
"a minimum of 3 sentences per review"

Psssst, that's what Google determines to be an optimal review length (assuming its on topic, good grammar, etc).

Google with a MALL BOOTH? I thought it was an anomaly or a test just in that one Frisco mall.
Looks like it might be a TREND! Check this!

Announcement from a New York Mall

Here’s a secret as to how bloggers – like yours truly – learn about what’s timely, topical and trending. We use Google+ Local! It’s the best way to find great restaurants, shops, salons – you name it. You can also leave reviews, preview scores and plan your trip by previewing via Google Search and Maps!

Google+ Local New York will be setting up shop from March 9-30 on the second floor of Time Warner Center to show you how to use Google+ and share reviews of local businesses – stop by the Google+ Local booth to check out Google+ and rediscover your city – plus, you’ll take home some free swag for sharing your opinions!
Click to expand...

Man, who is in charge of Local these days? Silvio Berlusconi?
Latest Blog: When Can Google Maps / GMB Content Cause Google Ads Disapprovals?

Phil Rozek said:
Man, who is in charge of Local these days? Silvio Berlusconi?
Click to expand...

I don't know but they seem to allow a lot of spam on the Map to remain. Hopefully with the shakeup in Maps, things will greatly improve on the Spam front.

OK folks - here are quotes from the type of folks who post reviews in exchange for Google swag at malls. 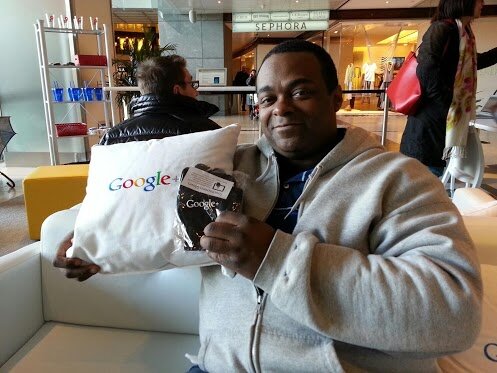 "I did it too. They gave me 4 shirts bc I had so many reviews"

"Did you try the google hearing aid? It should be right next to the glasses and google walking canes ﻿"

"Better to be hanging out in the Google store instead of the Barbie section of Toys 'R Us....just saying﻿"

Hear ANY comments about sincere reviews like "I was so excited to review my fav restaurants"? No they just want swag! I would say incentivizing reviews in this manner, does not lend itself to honest sincere reviews. But then again - maybe I'm a little jaded.

OH and here is another Mall Booth in Michigan. THIS TIME doing a drawing for a $500 shopping spree! 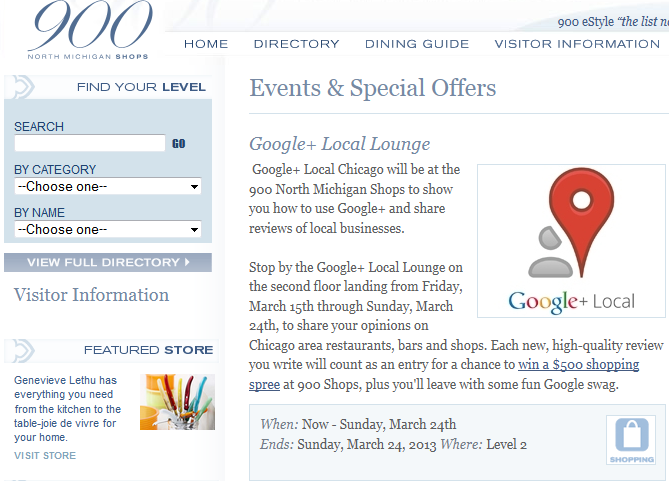 Linda Buquet said:
Hear ANY comments about sincere reviews like "I was so excited to review my fav restaurants"? No they just want swag! I would say incentivizing reviews in this manner, does not lend itself to honest sincere reviews. But then again - maybe I'm a little jaded.
Click to expand...

Couldn't have said it any better, Linda!

Gotta love how they say ?high-quality review? ? as in:

?Get 1000s of high-quality backlinks at UNBELIEVABLE prices!?

Here's a good article with some GREAT images about the Google mall booth I posted about earlier at Columbus Circle.

Look at all that enticing Google swag!

Give us all your reviews!

I walked past this very kind of booth last weekend in Austin, Texas. I was also curious and.......the same story. They are asking you to write reviews to recieve the Google gifts of Tshirts and water bottles. The area was decked out in Google swag just like you said with a couch pillows and even a book shelf.

They had four computers set up and ready to go. I was shocked........if I had time I would have snapped some pics!

It was called a Zagat Survey Lounge

Wow, 1st hand experience. Thanks so much Marie! 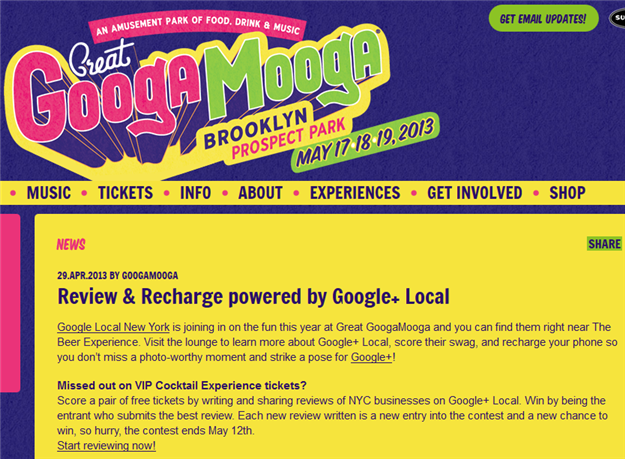 ​
Link to ad: About | Great GoogaMooga

Think you're an expert on all New York City has to offer? We're giving away Two VIP Cocktail Experience Tickets to The Great GoogaMooga (ARV $150) to 1 lucky winner just for sharing your opinions on New York City businesses.

Enter below by clicking the red entry button and signing into your Google account, then you can start writing reviews on Google+ Local to get started. Each new review you write is a new entry and chance to win. We'll pick the entrant who writes the overall best reviews during the contest period as the winner, so don't forget to write with style.
Click to expand...

A few other "OFFICIAL Google Contest pages" I found:

Review places in San Francisco and you could win a Nexus 7 and exclusive tickets to our Mission Dishcrawl for you and a friend!

And a couple others I dug up...

<a href="https://www.google.com/local/contest/BaconfestChicago">Win Tickets to Baconfest by Reviewing Chicago Restaurants and Nightlife Hotspots</a>

I thought that anything unnatural was frowned upon?!

How does someone without a Google+ account suddenly open one, leave 10 reviews the same day (and not match that total the rest of the year) appear natural?

I'm sure they would counter with 'Our goal is for the new reviewers to be introduced to the Google + platform and leaving reviews and that they would continue to do so because it would create a better world for us all to live in".

Or some other form of a pageant answer

I guess since they're not asking them to review Google in particular?

Good point about the chamber - they are always looking for ways to provide more value for their local business members in order to increase and maintain membership.
You must log in or register to reply here.
Share:
Facebook Twitter Email Link