Just discovered in the wild. Radically different Google local search display. This could be part of why Places search went bye-bye. Pic =s a thousand words so here it is. 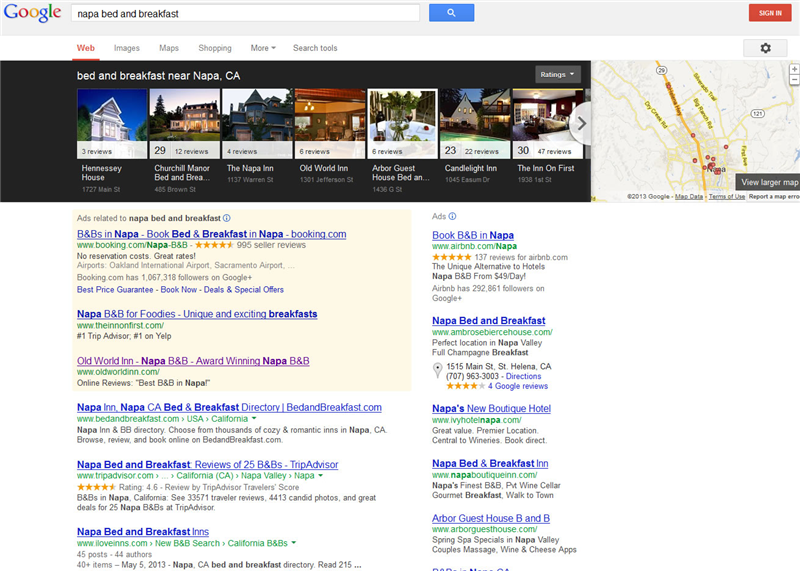 Image via Acorn Internet Services​
I'm seeing reports and screen shots about this change, but am not seeing it here. It 'could' just be a BETA test, but usually when folks report these types of changes they do eventually roll-out. Right now folks are only reporting see this new style display on some restaurant and lodging searches. But I have a feeling this may become the new normal.

.:. Instead of 3 pack or 7 pack, then more link to paginate back. It looks like 7 across horizontally but you can scroll and see 18.

.:. Images will become MUCH more important

Image via Acorn Internet Services​
Here is Acorn's story and observations, then another story and more screenshots follow.

Humm – The Ratings Filter, when used by your guests, is going to filter out properties that…

So, what does all this mean for Innkeepers and your Bottom Line? – - – Because we all know, all you have to do is to take a quick look at your Google Analytics to KNOW that Google is typically your NUMBER #1 referrer of traffic. In short, you need to make sure you are going to show up in the Local Carousel, and not just show up, but show up closer to #1 than to #18, and have the best possible G+ Zagat Score.
Click to expand...

It looks like Pete Meyers from SEOmoz was possibly the 1st to spot the change. His screenshot below. And here is his commentary on Google+ 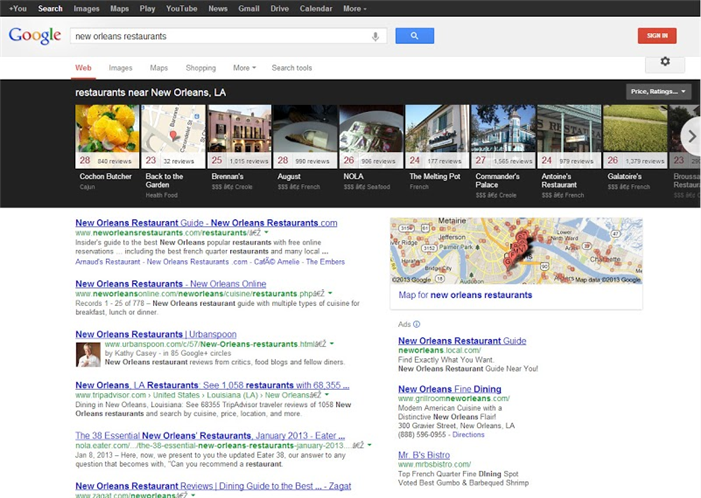 ​
Jennifer Slegg over at Search Engine Watch also blogged the story and shows a couple different search results with the new carousel.

Hungry for more screenshots? Here are a couple from @JustinKHowley.

#1 Rule for Google Local? Everything changes and nothing stays the same!

IMPORTANT - can you guys run some of the searches above to see if you are sitting on one of the test servers and do more exploration? See how many results you get when you scroll. 18? Then what? Is there a 'more' link? Dig deeper and tell us/show us anything you find that's noteworthy.

Also let's test to see if the algo changed. We need to compare the top 7 in the carousel to the regular pack order. I'm going to do some ranking comparisons with the results shown above now to see what I can find.

What do you think? Just a test? Or will this be the new normal?
Or do you think this will only roll out for hotels and restaurant searches?

Even Newer Local SERP. Is anyone else seeing the same?

New Google Search results? That's what it seems like and hear we go again. A popular website called Reddit is showing some interesting results. Check out what this search done by br1anfry3r has produced.

​
I'm not sure what my feelings are on these potentially new results are so lets get some people to comment. I, myself are unable to pull these results. Is anyone else seeing the same?
Last edited by a moderator: May 12, 2013

Wow. Thanks for the share Linda. That Carousel feature looks to be very powerful and (like you said) would make images and review so much more important. Also, presumably the emphasis on ranking would then become being to the far left of the Carousel (aka, the top positions)!

Re: Even Newer Local SERP. Is anyone else seeing the same?

Hi OP, thanks for posting. This is pretty big. I'm not seeing it yet in Canada.

Re: Even Newer Local SERP. Is anyone else seeing the same?


Optimize Prime said:
New Google Search results? That's what it seems like and hear we go again. A popular website called Reddit is showing some interesting results. Check out what this search done by br1anfry3r has produced.
Click to expand...

Thanks for the screenshot Ryan. I merged your post to keep everything about this update in one place and am also moving this discussion to G+ Local Important section of the forum since I think it will likely go from test to a full update, at least for certain industries.

I'm not seeing it here in the UK yet either but it does emphasise what I've been telling clients in that they must focus more on getting happy customers to review them.

Do we know which image they are actually picking to show for the business listing? Is it the first one to be uploaded?

Thanks for that Linda. I was having a hard time finding the thread. I knew it was somewhere! haha

No worries at all. ALWAYS post new info like you did as you never know it could be something I've not seen or posted about yet, so the info is always appreciated!

Google I/O is this week. I wonder if this update and the new Google maps update will both roll out in time for the conference?
A

Does anyone suspect the carousel will replace the local results section of the SERP all together?

I've been wondering about that too Alex. In industries that tend to have a lot of bare unclaimed listings or industries that aren't well represented visually, seems it would be a waste of space.

I noticed a client's position on the "carousel" earlier today. As I have done for the past year+, I run a series of searches using his keywords and various locations around his centroid.

In the past he has been on the "top of the list" (1A=Page One; Position A). Now, he is the first (far left) "in the lineup". Where he was third on first page (1C), he is now third in "the lineup". I hadn't noticed from the previous posts here the ">" at the right end of the carousel. Clicking it reveals the next set of nine providers. (Hello, Page 2!).

Another interesting observation: a keyword in several communities near my client's centroid brings up the carousel. Same keyword in another community (adjoining and of similar population, demographics, etc.), brings up one "Place", a map, and a page of web organics.

From this I'm concluding that I'm looking at the new face of local search. It appears also that is rolling out in waves and not necessarily in a "logical" geo sequence.

And I must confess, I am breathing much easier. The correlation between old and new looks pretty tight. I know I can deal with this.

Yea Jim! Thanks so much for digging deeper and sharing your findings especially as it relates to ranking! Much appreciated since I still can't get the new update.

In this image it shows 8 across and I just checked and they all match the current ranking order.
http://www.advancessg.com/wp-content/uploads/2013/05/google-local-listings-revamp-1.png

Apparently the carousel is in beta. Here's the SERP for Guitar Lessons in Laguna Niguel, CA" from Monday. 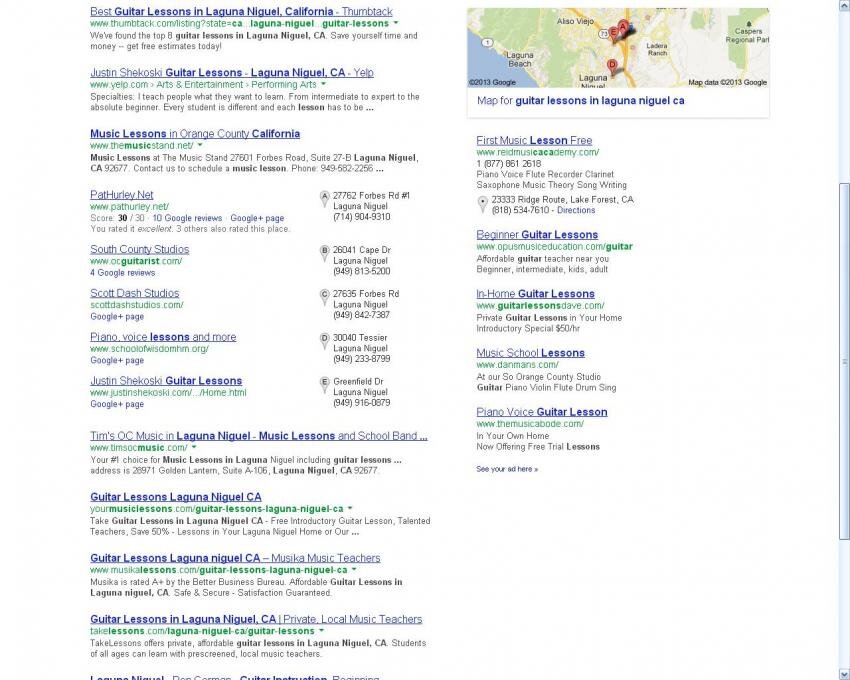 The more things change, the more they remain the same.

Hi. Was glad to find discover this forum. I was somewhat less glad to discover the Local carousel tests showing above organic and everything else in restaurant/hotel SERPs though...

If yes to the above, what effect do you think it will have on organic local results that are currently ranking at the top of the blended page, i.e., above what is the perhaps soon-to-be-replaced organic Places Box? Do you think this carousel will decimate clickthrough rates to organic listings?
Last edited by a moderator: May 15, 2013

Yes, I think this could be the new look of local search, or not.

I did a search ranking analysis for a client on Monday, a guitar instructor. New carousel was presented.
Did same search today. Old listings format was presented.

So yes, this is not confined to hotels/restaurants. Plumbers, electricians, even guitar instructors will be affected.


waterprism said:
Hi. Was glad to find discover this forum. I was somewhat less glad to discover the Local carousel tests showing above organic and everything else in restaurant/hotel SERPs though... [/COLOR]
Click to expand...

I was going to point you to Jim's post above but then realize I should just merge your post and Jim's reply since it's pertinent to the main discussion.

Thanks for posting and asking some great questions!
W

Hi, guys. Thanks. Yeah, so I guess G, inveterate tweakers that they are, will be making this the new normal for organic local results. Haven't seen a result like this return for me yet -- just seen screenshots like Jim's and those in Linda's posts, but it kind of looks like it will take a big chunk out of organic clickthrough. It's imposing, noticeable, is supposed to be both of the former and will get a lot of clickthrough at the expense of the, by comparison, drab organic results that return for the same search queries. Kind of irritating for someone who ranks organic sites for local queries.

It is change brother, embrace it, and prosper!

I attempted to summarize all the different Google updates and post the most important links in this thread:
Massive Google Local Updates, Review Stars are Back & Tons More

Head's up. More info on this new update which I think it close to rolling out.

Something funny going on in Google Maps... am I missing something?