One of our most eagle-eyed members, Ryan AKA Optmize Prime spotted a little problem on Google Maps and posted last night.

Search Google Maps for "San Antonio Tx". The city is nowhere to be found.

In it's place... a shitty ONE BOX! The bane of my existence!

A business called "San Antonio Car Carrier" - has the whole city locked up! 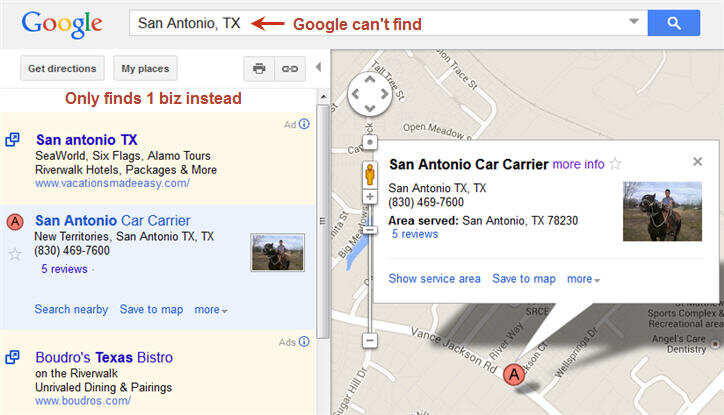 As Ryan pointed out searching for directions is futile, because Google can't find the city.

Same thing happens on a regular Google search for San Antonio Tx. You get that single pinned result for "San Antonio Car Carrier".

Mike Blumenthal, myself and others have been trying to push Google to change the shitty algo that wrongly triggers a branded one box for a generic term and locks every other business in that city out of the 7 pack - for almost 6 months!

Maybe now that a one box ate an entire major metro, Google will finally see that part of the algo is cranked too damn high!

If you Google "San Antonio Car Carrier" "(830) 469-7600" (the name as listed on the Place page) there are ZERO matches, but the real DBA is plural and has only 17 matches on Google, so it's not like it's a strong listing or uber big brand!

I suspect it's a bug that caused this particular maps problem. TX is repeated twice in the address, so maybe that's what did it? Hidden address on the listing is entered as "New Territories, San Antonio TX, TX"

In the meantime, Yelp keeps appearing at the top 3 - 5 top organic results and above the 7 pack. Search Google for auto repair San Diego - auto repair Los Angeles - auto repair San Jose and you'll see. They couldn't buy Yelp back in 2009, and instead of helping SMBs with local, they let Yelp become the behemoth that it is now.

When I used to suggest our clients to concentrate on getting reviews in G+ local, now most of them are flocking to Yelp. Spite of their "review filtering algo BS", they gladly pay the $300-$500/Mo., because they think that it's the only way that their good reviews will count.
You must log in or register to reply here.

Google Business Profile has disappeared in search and maps