My company works specifically in the dental/orthodontic realm - which is admittedly more scrutinized than many industries in terms of Google reviews.

We've been chasing our tails to find a rhyme or reason as to why some reviews make it through while others don't. In general terms: company (orthodontist) asks client (patient) to consider leaving a review. Client (patient) goes home and does such. It seems to be very rare that these posts actually make it "live." Many posts here and on the Google forum have suggested that:


So we began to recruit actual patients of a few client orthodontists to perform a few tests as follows (each group is 2 people, we had 1 per group per week attempt to review over 5 weeks):
Patient Group 1 actively uses Google+ on home computer
Patient Group 2 actively uses Google+ on smartphone
Patient Group 3 is new to Google, uses home computer
Patient Group 4 is new to Google, uses smartphone​
We found very little discrepancy between each group as to what % of their posts went "live." Each group was successful for the given orthodontic practice 0 out of 2 times. Ironically, group 4 (new, smartphone) had 1 out of 2.
So we altered the experiment and asked two of the patients (one from group 2, one from group 4) that were unsuccessful posting for our client to make the EXACT same post for another practice 30 miles away in the same week (not a competitor and a friend of our client). Both of the reviews went live.
​
My takeaway is that some pages must themselves have higher "trust value" with Google than others. So what the @$#& can we do to figure out what facet of a page makes it less trustworthy than another?

Very interesting Carleton! Thanks SO much for sharing.

I have to admit I only had time to skim BUT based on that my initial thought is, it seems like possibly this listing has a red flag on it for some reason. Maybe some type of previous review pattern tripped a filter and most reviews are being filtered at this practice now.

That would account for the myriad of SMBs (and many Dentists) that are saying NONE of my new reviews are showing up.

My other thought but maybe this is not correct is - IF your client was the 1st review these people made it didn't show due to only one review and lack of trust. BUT the 2nd review showed because now they are not virgin reviewers. (Not sure it's true or makes sense, just throwing it out there.)
C

It has to be the "red flag" thing . . . because we even had them edit and resubmit their reviews after leaving a few others for local restaurants, gyms, etc. Never went live. But not knowing what caused the flag to occur is problematic. The client follows Google's rules to the letter - because we serve as the consultant, they don't do anything without our explicit guidance on "how to." We even create all their print and online materials, so I know they've never done anything improper.

Do you think most of their reviews in past came from email links, either due to a newsletter that asked for reviews and could have created a "wave" or individual follow up emails after each appointment?
C

Yes, certainly in two to four pretty significant waves having to do with newsletters and events hosted by the practice. But this is true for the other practice as well. So I don't think the velocity of reviews is the flag-maker. I have removed the places page from our master account and am reclaiming from their account. I'm thinking that the flag might be due to our having claimed it into an account that still admins 30 or so pages. Maybe Google specifically has it in for Ingenuity?

Or maybe not has it in for your company specifically, BUT for agencies that have multiple clients in the same account? That's an interesting theory.

And as I always say, when Google leaves us in the dark it makes it easy to come up with all kinds of conspiracy theories. But really who knows? All we can do it test and guess sometimes.
B

I'm having a similar issue with the listings I manage. We follow Goog's Quality Guidelines to a T and we still can't get new reviews to show. With one location, we specifically asked 1 client to give us a review, they did so and it's been over a month and a half now and still nothing. We were going to add it in a newsletter but have held off until we know the review system works.

The review was honest, wasn't spammy in my opinion (I have a screen shot of the review if needed), we had the client try posting the review in different browsers etc, still nothing.

Now, they are "new" to Google+ but that shouldn't be a factor IMO. If Google is going to make EVERYONE join Google+ in order to leave a review, age of account shouldn't matter.

I'm seeing this issue on quite a few locations. Any other thoughts or suggestions aside from physically mailing the review to Mountain View CA?!

Yikes! I was unaware that a specific listing could be flagged causing the reviews to not display, compared to individual reviews being flagged.

Linda, you mentioned "Maybe some type of previous review pattern tripped a filter and most reviews are being filtered at this practice now." We have created a page on our client's websites that have links to their listings on different review websites. We have since removed all links sending patient's to their Google listings, but do you think that Google could have flagged our client's listings because people were being sent directly to then in the past?

A lot of our client's have mentioned to us that their patients' reviews are not showing up...

If this is the case, how would we go about getting our clients' listings unflagged? Every review has been legitimate.

I want to add some fuel to this discussion. I have a client that has apparently been flagged by Google (no idea why, all legitimate reviews). Of his original 50+ he now has 5. New reviews sometimes make it live, but they disappear within two weeks. The interesting part is some of these reviewers are part in his personal Google+ circles. So when they leave a review, it shows in his SERP that they've left a review, but the review itself doesn't show. I'm attaching a screenshot so you can see what I'm describing (Hulse Ortho).

To mention, we've seen that these reviewers have left reviews for other area businesses, and they continue to show . . . which leads to the conclusion that Google doesn't distrust the reviewer, but the company being reviewed.

One more interesting observation - Google also seems to have a geographic component to the filter. Realizing that dentists are universally disliked by Google, we would expect that they ALL lose reviews equally across all of the US. But that's not the case. Every dentist/orthodontist in Carlsbad has lost the majority of their reviews. (The one exception is the practice with 7 - see screenshot. They had the fewest but didn't lose any . . . now they have the most.) Anyway, if you look at a market in Orlando, where there are three practices that use a rep management company to write phony review actively, there is almost zero reduction by Google. As a note, we know of the phony reviews because we're a member of their study club at which they recommended the use of said rep management companies.

The hard part is figuring out how to regain Google's trust. She (erroneously) suspected some malfeasance on the part of the page, deleted the reviews, and red-flagged it. We've made sure that he asks for reviews on Yelp, InsiderPages, etc. to spread the directory balance, but Google seems to be his patients' brand of choice. Suggestions appreciated. 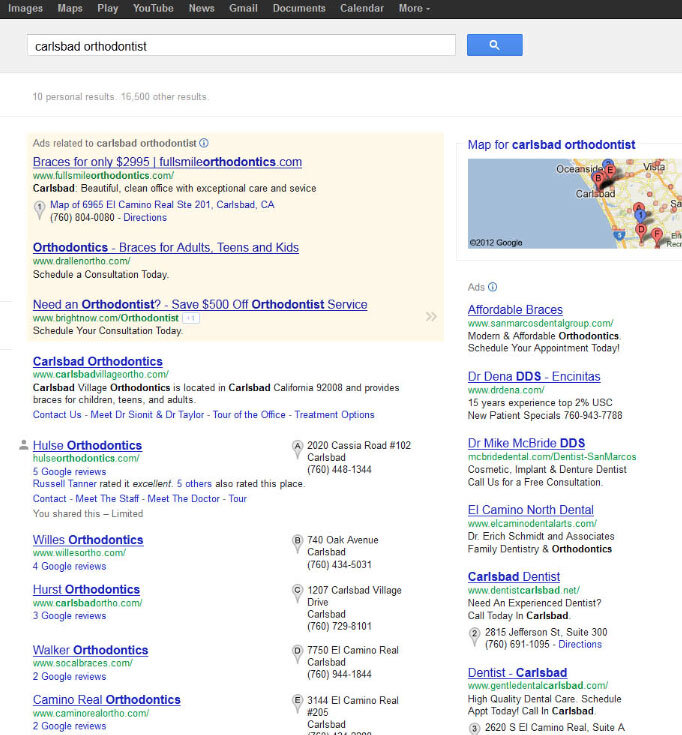 Carleton, so sorry you are still having problems with the Hulse account. Must be SOOOOO frustrating!

Thanks for the screen shots and all the details.


Carleton Wilkins said:
Every dentist/orthodontist in Carlsbad has lost the majority of their reviews. (The one exception is the practice with 7 - see screenshot. They had the fewest but didn't lose any . . . now they have the most.)
Click to expand...

I don't see anyone in screenshot with 7 reviews. But I searched and found it. It's LaCosta but all their reviews are over a year old, so who's to say they have not been getting recent reviews that are blocked as well.

The geo blocking does not make sense to me and of course it always seems crazy when you see reviews you KNOW are fake standing and legit reviews are getting filtered!

Wish someone could figure out what's going on and make sense of what's blocking some accounts that are just honest businesses getting honest reviews.
You must log in or register to reply here.

Google posts are not being updated on Google websites
2

V
Account permanently restricted from posting imagery/local updates. Can it be reversed?