How Much Does Keyword Stuffing Impact Ranking?

I decided to do a test. There was a dentist that was keyword stuffing and listing her business title as "Leesburg Dentist". Clearly not her practice name. I updated the listing to list her proper name (Dr Deirdra B Kokel DDS) and decided to check today to see what impact it made.

What I found was a bit strange. In the Local Finder, she's still listed as 2nd (same as before) BUT she vanished from the SERP on Google.com. I've often wondered what causes there to be a disconnect (when a business is in the top 3 in the Local Finder yet not in the 3-pack) and am now wondering if there is a lag on the Local Finder or something.

Anyone run across anything similar?

When did Google update the name?

For the KW: "dentist leesburg VA", I'm seeing her in the #1 posting for organic and #2 for local. I attached a screenshot. 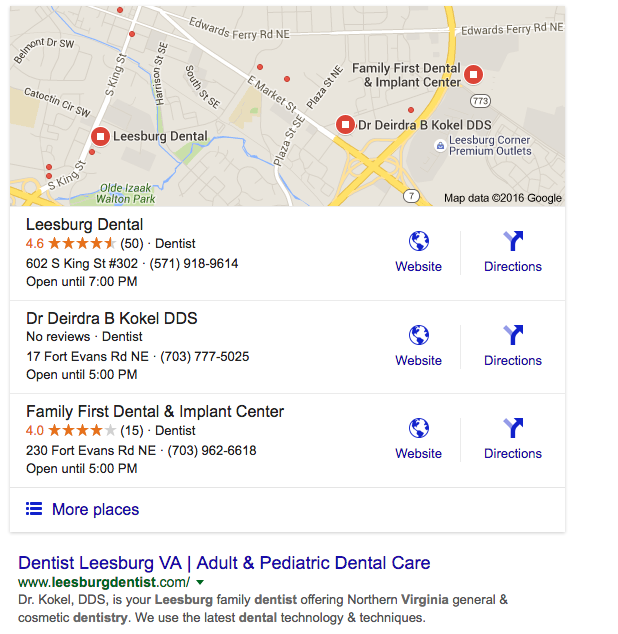 I used Bright Local's tool (https://www.brightlocal.com/local-search-results-checker/), set my location to Leesburg, VA and searched "Dentist Leesburg VA" and I get this (attached). Can you do that same thing and tell me if you see what I see? 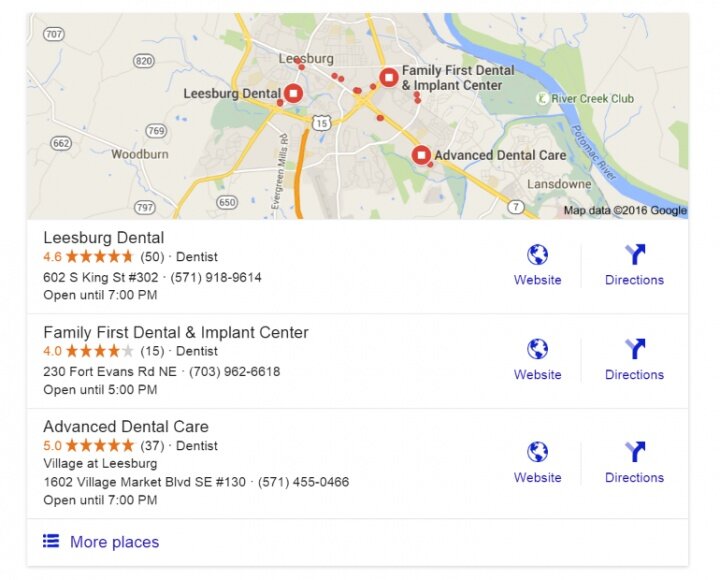 I see the same thing. Just to clarify, I did the search on Google Chrome Incognito. I'm in California - which may or may not matter.

Now I'm seeing the same thing as you. So strange.

Using the BL tool set to Leesburg, VA, I get:

She still has some important citations with the name: "Leesburg Dentist"
Wonder if that's helping the ranking?

Hi Joy, I just did a quick test too with Britelocal's tool. With Leesburg, VA as the location and Dentist Leesburg VA as the search phrase, I got them as #2 local and #1 organic.

Looks like it might be the SERPs that have a lag or something, a name change dropped it off the 3-pack but then it settled back there regardless after a week or so (since you said it changed on the 20th). Interesting.

I imagine if they were ranking with city + keyword as the business name but less going on across the board for other ranking factors, changing the name might have seen them vanish instead of just bob up and down and settle back in 2nd. Their really strong organic showing makes me think the name itself might not have been the only reason they were number 2.

To answer your real question, I've noticed a disconnect at times between the local finder and the 3-pack, but I haven't noticed much rhyme or reason with things updating at different speeds before between the two, it's something I'll keep an eye on.

My VPN isn't letting me connect to anywhere in VA for some reason. If I can get on later today, will test and post an update.

Yeah, I'm seeing exactly what you are seeing now. Not sure what was going on yesterday. I'm going to keep an eye on this but I agree with James, the site is EXTREMELY optimized for this keyword so it probably is holding their ranking there. I want to do more of these tests to see how much the name actually impacts ranking.

I am getting a problem when attempting to go to the website:
leesburgdentist.com

You don't have permission to access / on this server.

when you put in something like "dentist leesburg va" you are articifically inflating the importance of the exact match and google may assuming that you may be looking for dentistleesburgva.com

People often put a URL into the search bar. So if you enter apple, sony or local search forum, you will get apple.com, sony.com and localsearchforum.com

Any change to an algorithm is checked by quality raters to ensure that exact match domain shows on top.

Caveat is that generic terms shouldnt show automatically be given to exact match. So topmountrefrigerator.com doesnt necessarily need to rank for top mount refrigerator.

Given the boost that google must give to an EMD, as long as there is some half decent SEO, the EMD has some advantage for the exact term.

In this case, many people who are in the area entering "Leesburg VA Dentist" may be looking for that specific site.

Its an odd term to enter if you are in the area and simply looking for a list of dentists.

most likely people will just open google and search "dentist" without the geo modifiers.

anyone try a leesburg IP and just typing the word "dentist" and see where it ranks?
You must log in or register to reply here.

How to track SAB Ranking?

Anyone Else Noticing Local Results Vanish for Sex-Related Legal Queries?