Most of the pros here know that exact match or partial match names that include city and keyword RULE in the Google - very often unfairly. If a business or listing has nothing going for it but a KW stuffed name, it should not rank high.

If a listing is outranking you or your client, here is one black hat trick to check for.
tl:dr Don't try this at home! 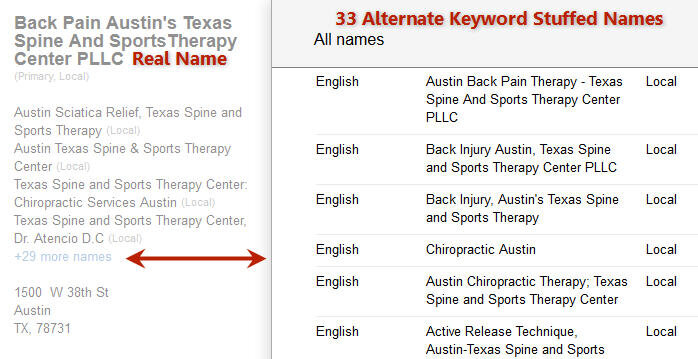 For those that don't know much about Map Maker, you can add alternate names. BUT that's only for similar versions of your name, that you are known by.

For example Alpine Family Dentistry might have a lot of patients just call them Alpine Dental for short. OR maybe previously they WERE Alpine Dental. That would be an appropriate use of the alternate name field.

BACK STORY: This is the Chiropractor I posted about yesterday with some actual claimed dupe fake keyword stuffed listings. In this post: <a href="http://www.localsearchforum.com/google-duplicates-merges/37798-rip-map-maker-phone-search-local-dupe-research-just-got-lot-harder.html">RIP Map Maker Phone Search - Local Dupe Research Just Got A Lot Harder</a>. As I was doing research for that story, I discovered this little trick.


BUT DO ANY OF THOSE KEYWORDS RANK??? ​
Well in yesterday's post I warned that dupes almost always kill ranking. Well in this case this fake name listing with 33 additional alternate fake names, OUTRANKS the real name and the other dupes. AND he not only outranks competitors for some keywords but SCORES a one-box and locks all the other honest chiropractor listings out of map search. 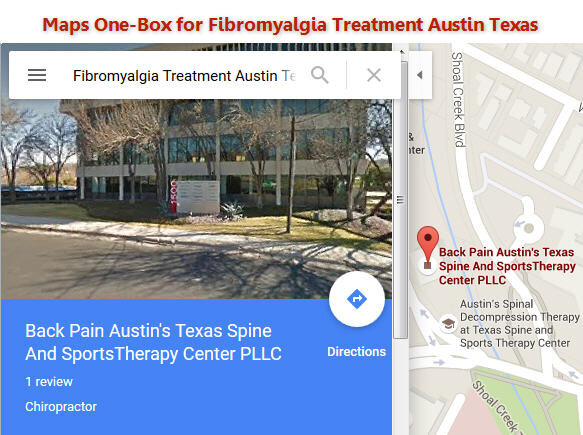 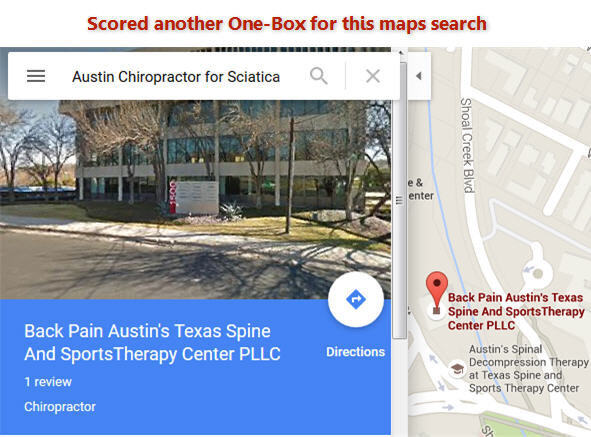 NOTE: "Austin Sciatica Relief" is part of one of the fake names, but I didn't think that would get many searches. So I did a search using the word Sciatica, but more the way a patient might search: "Austin Chiropractor for Sciatica" instead of exact match for "Austin Sciatica Relief". I also thought exact match would not be too competitive and the query I used would be more so. Still scored a one-box.

Granted those a long tails BUT they should not rank at all just because a fake keyword stuffed name was added. However, that shows you how much weight Google puts on keywords in the name.

BUT THAT'S A KEYWORD STUFFED DUPLICATE LISTING - SHOULD NOT RANK AT ALL!

FOR CONSULTANTS: I shared this primarily to let you know this is one more thing to look out for when doing competitive research. Or even to check on a potential new client, to see if they have any past spammy stuff going on.

And it's something I'll now be checking more closely in all the "Why Does this Guy Rank So High?" posts we get in our Ranking Puzzles forum.

DISCLAIMER: I'm not really worried about showing this trick to unscrupulous marketers, because I really don't think you could get away with these edits today.

HOWEVER, if you check history in MM for this listing you'll see Google removed all those names AND a bunch of KW stuffed categories on Sept 29th 2015. Then GOOGLE added them all back in on Oct 1 2015. . So my guess is that was a bot, and those names are seeded via other sources or something. But I'm out of carpal bandwidth and can't chase this down any farther.

H/T to this lovely Chiropractor who now has given me fodder for 3 posts about spammy listings and what NOT to do on GMB. And thanks to Google for not taking these listings down the times I've reported this guy, so I still have something to talk about. (Let's see if his fake dupes stay up after all this.)

I believe it`s some glitch. In the middle of August I found something similar

That IS weird. Exact same scenario.

Google deleted all the fake names Sept 29th and then added them back Oct 1st.

I'm thinking maybe more of an algo change that caught them all and removed in Sept.
Then that update was rolled back Oct 1st and they were added back in or something???

I`think is something related to translation in diff language.

Added /Removed names in diff language on same date, but names are ok as far as I can tell

Same think with some hotels in Bulgaria.

And something than can`t be seen every day :

This is very interesting and very spammy! That's one more thing to check on when doing competitive research. Thanks for the find Linda!

I'm going to bring this up over in the Regional Leads group. I am equally curious about how the names got added back. Adding additional names to a business normally is something that gets moderated heavily so I'm surprised this still works!

"I am equally curious about how the names got added back."

Ya especially since it's Google that added the names back in, in all those cases. (Likely a bot.)

It's a little hard for me to hear sometimes in this Hangout with Google, but I think one of the product managers said that was a glitch.

Over and out. Back to the Google Hangout.

these must win an award, Linda. Have seen spammy additional names before, but never to this extent. I thought 32 was amazing, then saw the palace place and nearly fell out of my chair!

I just finally had time to report these to Google this AM. Was just going to MM to check something else.

Now that Chiro listing I referenced has had all the extra names removed and is pending deletion.

Since I reported the Palace too, I think it may be removed soon, so for those that can't see it I wanted to share a screenshot before it's gone. 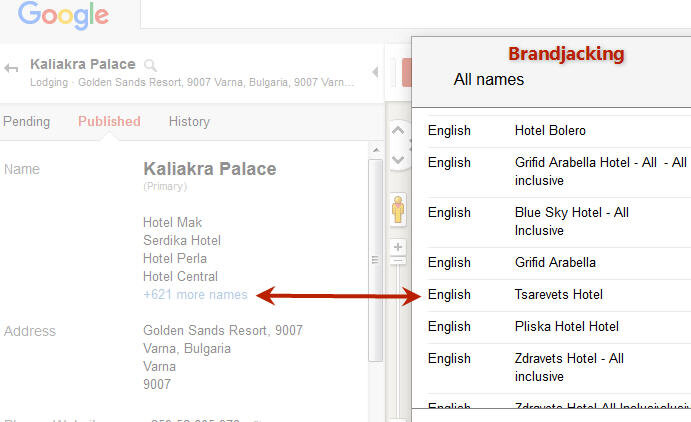 Nigel's edit is wrong. This listing should not be removed if it's a real place (and it looks like it is). What should happen is the owner who verified it should have their ownership suspended. They should lose the ability to manage the listing since they clearly have bad intentions. Also, the spam titles should all be removed (they have been due to another Regional Lead & I removing them).

The listing will probably drop in ranking as a result of the loss of keyword stuffing.

No Joy he's right and it should be removed.

See the thread I linked to at the top of the post.

He has 6 listings at that location. That one and another are keyword stuffed dupes and dupes are not allowed, so should be removed as spam.

Here's a screenshot of 4 of the listings just to get everything on the same page so you don't have to go back and forth. 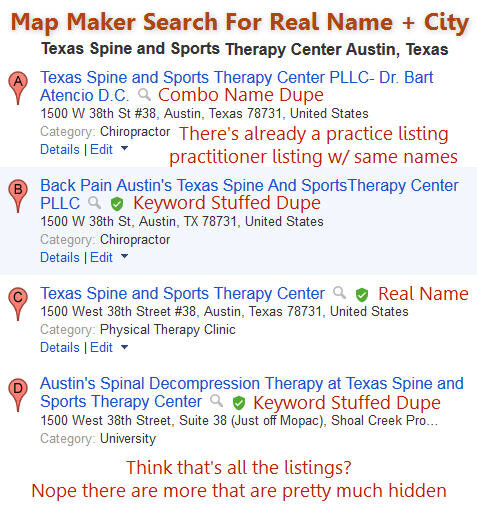 Then there are still 2 more as outlined in that post.

He used to have a bunch more keyword stuffed listings. I think 9 total at one point. But one of the times I reported him a few were taken down.

So he def needs to be suspended! (But then my best bad example will be gone. I think I've used this guy in like 4 posts to highlight various problems.)

Thanks for jumping in on those edits!

His reason for removing it is wrong. He makes no mention of dups and put the removal reason as spam. But I can report the dups if you want. I left them alone because I didn't want to ruin your example

Well to me since the listing is in violation on multiple levels and should not even exist it IS spam. But you know the MM rules tons better than I do since I don't work with it at all. Evidently he didn't key into the dupes so didn't mention. (Do you know who he is? Is he a RER? Or whatever they are called these days.)

Sure do whatever you think is right. Hopefully Google has read this post by now and if they read it tomorrow, they should be able to see the history of what happened.

But I feel strongly it should be removed and not merged. If it merges sometimes it carries some of the its weight and attributes and keyword stuffing with it into the valid listing.

Thx for doing the screen shot Linda.
It looked like they had entered the name of every competitor for the nearest 50 miles, and then also maxed out phone numbers too some that seemed to belong to other hotels.
Interesting way of trying to hijack searchers.
Sad things is people would have blamed Google for that, not the hotel, if it had been successful (no idea if it worked). Customer experience suffers - hopefully G will get on top of this soon.

I had not had time to recheck this til now, but the keyword stuffed Chiro pages from the 1st post have been removed.
You must log in or register to reply here.

E
Is there a way to gather vertical-wide review score data from Google Maps?

Google Business Profile has disappeared in search and maps