1st a reminder that the forum is going OFFLINE this AM for 24 - 48 hours while we move to our new domain. So if you start a convo here, it may get cut off. May want to make comments on G+ below.

Is Pigeon Making a Christmas Flight Overseas? Lots of reports coming in about major ranking shifts. Based on what I'm hearing, this sounds like Pigeon just flew over the pond! BUT it's really early, so I'll admit I could be wrong and have not personally investigated.

In comments below you'll see all the reports of ranking changes AND packs being reduced. Here is the convo on G+.

"Yesterday +Myles Anderson reached out to me and said they were suddenly seeing that new maps and classic were not matching up any more over in Canada, UK & Australia. He wanted to know if I noticed a change but I don't ever check non US listings so had not noticed.

The 1st thing I asked him, just off of top of my head was "Are you seeing search changes too? Makes me wonder if Pigeon spread it's wings?" Because that's what maps are like in US - they don't match now and classic still uses the old algo.

Now with what you guys are saying about ranking changes and especially packs reduced, makes me think Pigeon even more.

You could do a semi test. Take a SERP, see if pack matches new maps, then see if Classic more simulates the pack and ranking order you saw before.﻿"

"+Linda Buquet - You are on the money! I've just checked my 3 affected clients and I'm seeing them in their 'old' positions if I revert to Classic Maps. So you're saying that this is evidence of Pigeon being rolled out internationally?﻿"

So there you have it! I'm calling this a Pigeon update.

What about Canada, Colan and Joy? Myles says he's seeing similar changes over there.

Joy and I are starting to see some ranking changes as well...

Did you do the maps test I mentioned in that long G+ thread?

Reminder forum will be going down some time in the next couple hours. (I'm SCARED!)

So please continue convo on G+ when it does.

I'm not seeing exactly the same results but I am seeing different results in Canadian SERPS. Admittedly, I visit the Canadian SERPS very rarely but the one company I do watch has shifted dramatically. It's not the same as the US Pigeon results but nonetheless, it is a shift.

I checked my other local businesses in CA and they are actually behaving like Pigeon. One of my companies ranks outside of its location on Google.com (not possible pre-Pigeon) and is now doing the same on Google.ca.

However, the web search results for Google.ca are the pre-Pigeon SERPS. Has Google.ca seen the latest Penguin update?

I noticed some changes north of the border. In the last 5 days I've observed a lot of changes in the SERPS. For many terms, the SERPS would have 1 or 3 organic websites then a 7 pack. Now it's just a 7 pack.

A couple of clients got booted out of the packs. In one case, they shrunk the radius of the pack to include 4 competitors within a 3 KM radius of eachother. My client is located about 4 KM's away from them. Not sure why my other client got booted out. He ranks within the top two for searches within Google Local.

Barry at Search Engine Land said he got confirmation from Google that the update did indeed spread overseas.

<a href="http://searchengineland.com/google-pigeon-update-rolls-uk-canada-australia-211576">Google Pigeon Update Rolls Out To UK, Canada & Australia</a>

Google has confirmed that their local Pigeon update, which rolled out in the U.S. on July 24, 2014 has now expanded over last week to the United Kingdom, Canada and Australia.

After questioning Google about rumors of this change, a Google spokesperson told us, ? I can confirm that this update has rolled out to the UK, Canada and Australia.?
Click to expand...

"When Myles told me Thursday he was seeing major inconsistencies between the old and new Google maps I immediately told him "That smells like Pigeon". Because that's exactly what Pigeon does in the US.

I did some checking with others and started seeing enough reports that I went ahead and called it as a update Friday. Since then have seen lots of reports at the Local Search and the Local Search Pros communities on Google+.

Thanks for confirming with Google that it's official Barry. At least they waited to roll it out after it stabilized a little. But not sure right before the Holidays was a good time to make a drastic change like this."

What do YOU think???

Mike just posted with a really good example of a classically bad Pigeon result across the pond:

<a href="http://blumenthals.com/blog/2014/12/22/pigeon-rolls-out-in-uk-australia-and-canada/">Pigeon Rolls Out in UK, Australia and Canada | Understanding Google My Business & Local Search</a>

Well clearly Santa heard me wrong. This is NOT what I asked for Christmas.

We're seeing United Kingdom results on Google.ca for London, Ontario phrases (specifically real estate)... On mobile it doesn't even say London, United Kingdom, it just says # + Street Name + London, and then a Call button which doesn't show the area code or phone number.... I think there will be alot of accidental calls across the pond until this is fixed up! 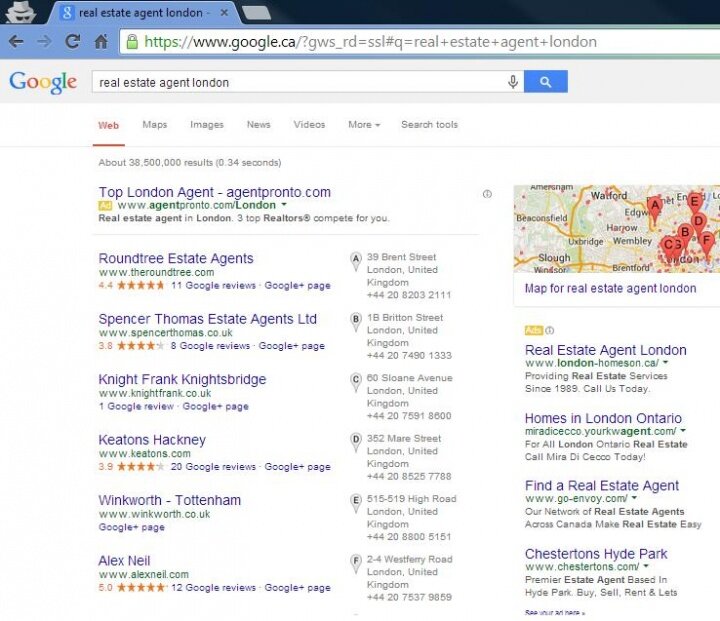 Oh I better understand the issue now Kate. Was going to ask you to explain in more detail in your post at the Local Search Pros G+ community, because I didn't really understand what you were asking. Now makes a little more sense to me.

(Since I'm not from Canada, forgot you even had a London there, so that's why didn't make sense to me. In my head when reading "You searched for London, you got London, what's wrong?" ;-) Slow on the uptake I guess. Blame it on server move burnout.

I'll add your comment above to your post there for other's benefit because I think it boils it down well, especially the part about mobile.

Plus I escalated to Google.

You know I was just wondering if other queries were off too, but did not have time to check.
I'll pass on to Google.

I'll add that to the G+ thread because that's the one I escalated to Google.

Barry reported an update at Search Engine Land I missed that clarifies this rollout.

Here it is at Barry's site, Search Engine Roundtable:

<a href="https://www.seroundtable.com/googles-local-pigeon-algorithm-global-19620.html">Google's Local Pigeon Algorithm Rolls Out Globally To All English Locales</a>

Google gave me confirmation yesterday on Search Engine Land and then later in the day, added that this was a roll out that is still happening to all English locales with the exception of India.

So, Canada, UK, Australia and any other English language Google search results page is now powered by Google's Pigeon algorithm.
Click to expand...

So there you have it. Now we don't have to guess if it hit this country or that country.
C

I feel you on that - when it first rolled out in the US, I had a location in Oklahoma beating my Colorado client because their business name included our town name.

It did shake itsself out and we're back where we should be - though I did also spend time reporting my feedback on those search results too (who knows if it really helped I like to think it did)
You must log in or register to reply here.

Changing Physical Address and updating to a Service Area Business

K
How to get "In menu:..." feature for specialties for restaurant on Google Maps ?