chadkimball said:
I just posted a new video on my Youtube/facebook/twitter about pigeon for my subscribers. Refers to some blackhat stuff so I won't link to it here...

But Just fyi, Garret Acott replied to this video and posted a new insight, he noticed that it looks like google is showing local packs based on HOURS OF OPERATION. Could be coincidence, but here's a quote of what he posted on my facebook business page:

"Something also very interesting, we saw it this weekend; they are also giving results based on open hours. For instance a HUGE change on Sun and 85% of the seven pack were new for us and they were all open on Sunday. Come Monday, they were all gone."

anyone else noticed this, or confirm/deny?
Click to expand...

<a href="http://localsearchforum.catalystemarketing.com/google-local-important/20764-unwritten-rule-sure-set-hours-right-google.html">Unwritten Rule - Be Sure To Set Hours Right in Google My Business Dashboard</a>

Linda Buquet said:
Chad we had a recent post about hours you might find interesting. May fit right in!

Unwritten Rule - Be Sure To Set Hours Right in Google My Business Dashboard
Click to expand...

Right, It makes sense that google would want, or even require folks to post hours of operation, but this was the first hint that they would alter the results/ranking that dramatically based on hours of operation. Would love to know if others are seeing this.

hmmm... Very interesting re: hours. It does make sense.

It's like she's throwing stuff at the wall to see what sticks.

One of my dentist jumped up in local pack today, too.

Is anyone else seeing wild fluctuations in rankings across browsers?

Tougher and crazy expensive. That's why my agency is back to Local after waiting for Google to get it together. We still mostly do PPC but SEO division is catching up really fast.


Phil Rozek said:
I hear ya! Although, as someone who's done PPC for even longer than local SEO, I can say that PPC is every bit as tough.
Click to expand...

Seeing a lot of things that do not make sense here, Joshua. I don't think anyone has managed to connect the
dots yet. And, maybe that what this algo is designed to do - within specific parameters of course. More realistically, it could still be sorting itself out.


JoshuaMackens said:
Is anyone else seeing wild fluctuations in rankings across browsers?
Click to expand...

I agree Dino, this algo does not make sense and is still changing all the time.
(Just look at the rank tracking in post #5.)

Here's a great post from yesterday with experts like Mike and David Mihm weighing in on this algo.

Linda, I would imagine since this is a major metro area that Google is tweaking the new algo update based results in these cities. It will probably fluctuate for a few weeks until Google feels they have the best results in the top areas. Just a hunch but I'm seeing 7 packs come and go so it doesn't seem they are done tweaking it just yet.

Hi Linda, thank you, I missed that one; it's a good read and prompted me to go take a look at results as related to an automotive service client I have. While we still maintain a very good presence in the 7-3-whatever-it-is-now Pack, I was very disappointed to see multiple instances of Yelp in Organic - featuring absolute POS sites/businesses. Additionally, a geo-specific query of "santa rosa automotive service" returns a Yelp listing for a auto shop in Florida that happens to be named "Santa Rosa Auto Service" - bummer - hope they haven't finalized their fine-tuning. The boon to Yelp thing bothers me...

FYI I need to leave for the day so have fun without me and keep up the great insights.

Linda Buquet said:
I agree Dino, this algo does not make sense and is still changing all the time.
(Just look at the rank tracking in post #5.)

Here's a great post from yesterday with experts like Mike and David Mihm weighing in on this algo.

I think it?s too soon to tell what may be temporary and what might stick, but overall I think Google may be trying to hyper-localize desktop results more.
Google has made several moves lately for the purpose of better aligning desktop and mobile results. Google?s interpretation of the searcher?s location may now be playing more into which results they see on their desktop, just the way it has been playing into which results they see on smartphones.
Some of the things people are reporting are a reduction in the number of local packs seen in the SERPs and a widespread reduction from 7 results in the local packs to 3 results. This may also be an attempt to better mirror on the desktop what mobile searchers see.

steven said:
I like this opinion from the article:

This may also be an attempt to better mirror on the desktop what mobile searchers see.
Click to expand...

Yeah I've noticed the mobile search is closer to the desktop if not more, identical than ever before.

Here's a comment I just posted on this article. Experts Weigh In On Google's "Pigeon" Update Aimed At Improving Local Search Results

I've been manually tracking local SEO terms the past few days from mobile and desktop and it's been pretty wild.

I've followed 4 major cities, one of them being my own. The results have been consistent for all 4 cities. Here's what I've noticed..

For City + SEO there has been no 7 pack for several months. Following the update a 7 pack started showing. A few days ago I noticed there was no longer a 7 pack so I started investigating.

The keywords I listed above each show a different 7 pack. When I change my location in google the 7 pack stays the same.

However on mobile search, I get a different 7-pack for each term than I do on my desktop. This is the same for each city I've been tracking.

The fluctuations have been sporadic and frequent the past few days, sometimes changing in the span of an hour. At a given time I will get a 7-pack for city+seo+keyword on mobile but not on desktop, a 7-pack on both, or no 7-pack at all. This is consistent for each city at a given time.
Click to expand...

Thanks for sharing your insights Cody!

Very interesting about the mobile side of that... 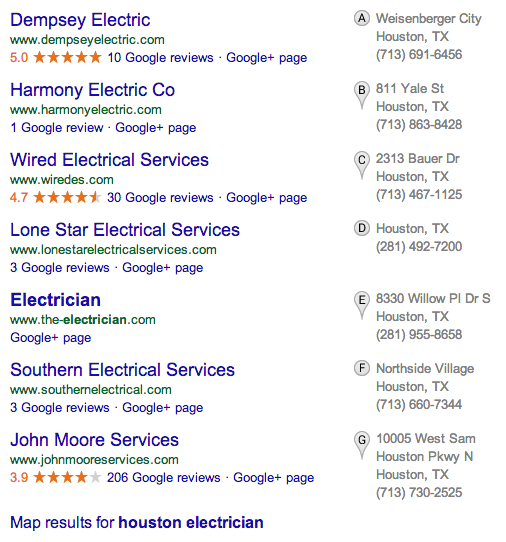 Pigeon WEEK! Our Clients listing in Katy was being pulled in for 'Houston Electrician' as well as a Sugar Land listing. 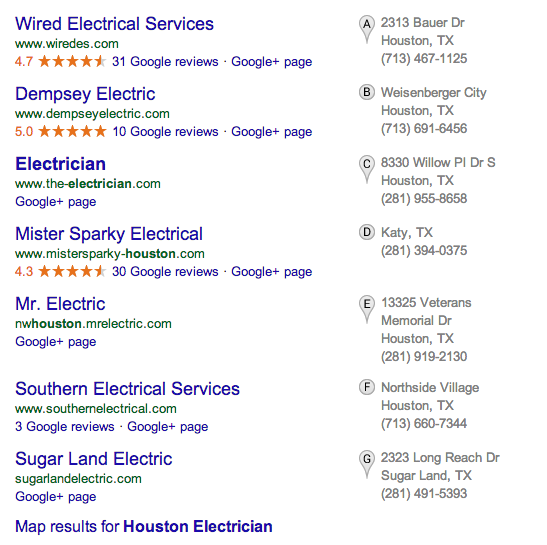 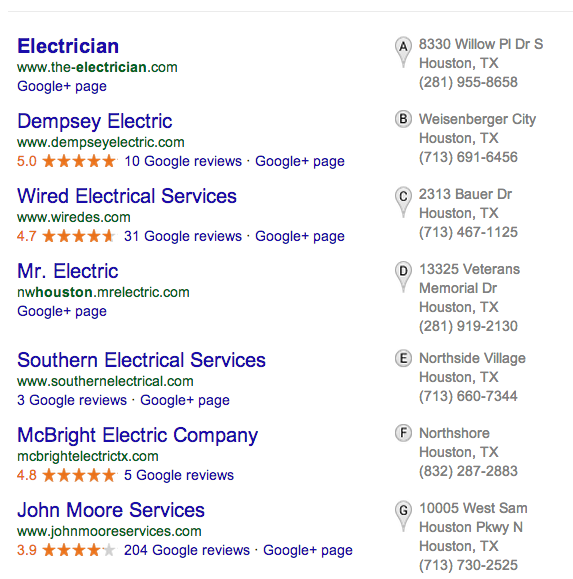 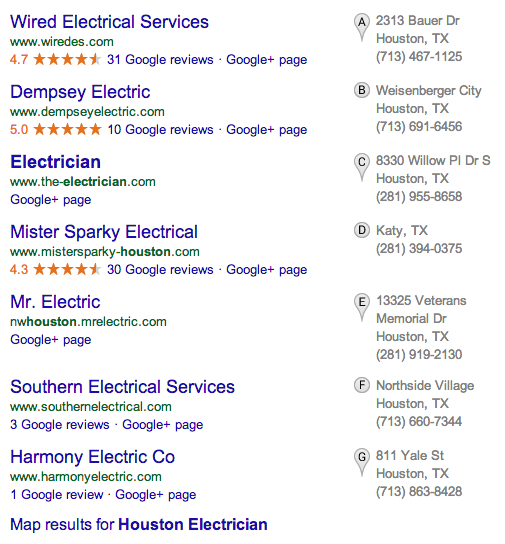 Thanks for sharing Amber! Yes she's still tweaking. Lots of changes and flux.
You must log in or register to reply here.