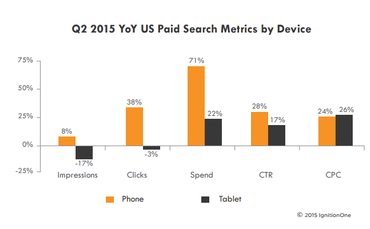 Paid search spending growth is up 22 percent for tablets and a whopping 71 percent for smartphones, according to the recent Q2 Digital Marketing Report from IgnitionOne... "Google has incredible dominance on [the mobile] side," says Will Margiloff, chief executive (CEO) of IgnitionOne. "But they still have, for the most part, a mobile display business and not really a native to phone and tablet business like Facebook. Google's got their work cut out for them when it comes to mobile native or native display, and the only real player there is Facebook."

While Google's display growth is down 9 percent YoY, Facebook's is up 48 percent, giving the social media giant 16 percent of the display share. Google's share is 31 percent, down from 38 percent last year. Facebook is posing a much greater threat to Google than Yahoo and Bing.
Click to expand...

See also Mobile Searches Now The Lion's Share: 5 Tips Not To Miss The Boat
You must log in or register to reply here.

The Convergence of SoLoMo (Social Mobile Local) and Online Reviews