That's the way I've always interpreted their guidelines - Google encourages businesses to ask for reviews (unlike Yelp) but not allowed to offer a reward for leaving a review.

Just getting back from the holidays and picking up on this thread.

To Priya's point, Google doesn't have a problem with soliciting reviews, just incentivizing them.

Each site has such different rules, and Google does seem to change up their support language frequently.

Review sites like G2 Crowd facilitate incentivizing reviews, but they label incentivized reviews on their site so they don't break FTC's rules of transparency.

If each of the incentivized clients/customers were to explicitly state in their review that they were offered an incentive, then it would not be against the FTC regulations, but the catch 22 is that might also draw attention from sites like Yelp and Google that you are incentivizing the reviews which goes against their TOS.

Ultimately, the safest thing (and we recommend) is to combine the offer as a 'thank you' regardless of whether a review is even written or not. Anything else does right the ire of the FTC, Google, Yelp, or other 3rd parties.

Thanks everyone for the feedback. 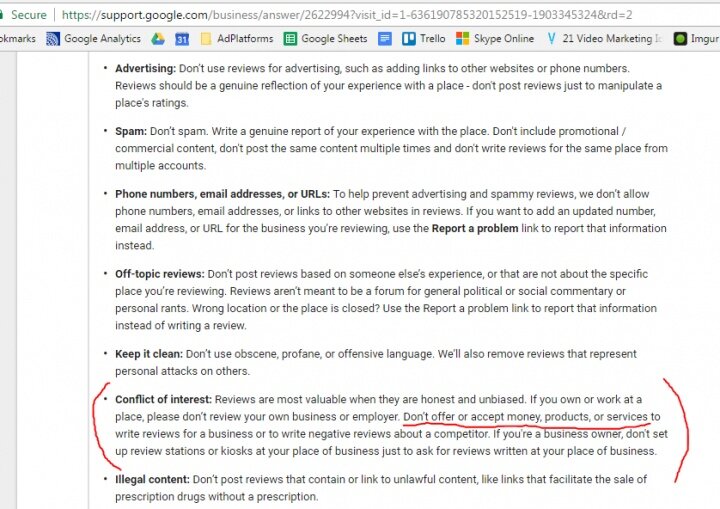 jaywilner said:
So, Garrett, what exactly do you mean by "combine the offer as a 'thank you' "? How would you recommend we do that in the context of our proposed approach (handing out a card to patients as they are checking out/paying)
Click to expand...

I'm not sure if this is the technique Garrett was referring to Jay, but it's kosher with Google, VERY smart marketing, FREE and I would think much more motivating than a chance at winning a $10 gift card would be.

HOT! <a href="http://www.localsearchforum.com/local-reviews/11989-reciprocity-gift-keeps-giving-google-reviews.html">Reciprocity - The Gift that Keeps Giving... Google Reviews that is</a>

What do you think? A lot of Dentists I know use this technique successfully.

jaywilner said:
Is everyone agreeing that our sweepstakes violates google and yelp's terms of service? I see the language here but its a bit vague.
Click to expand...

Yes it does. Google purposely leaves things vague, but a contest or chance to win is still considered an incentive.

Jay - What Linda linked to is exactly what I meant, she phrased it a lot better!

Also, notice in reply to that thread what our founder, Jon Hall, wrote about taking it a step further.

Thanks for linking to your great thread Linda!
You must log in or register to reply here.

The UK’s competition watchdog is investigating how Amazon and Google tackle fake reviews.