Hi all,
Does anyone know what the deal is with sticky red text on the attributes section? 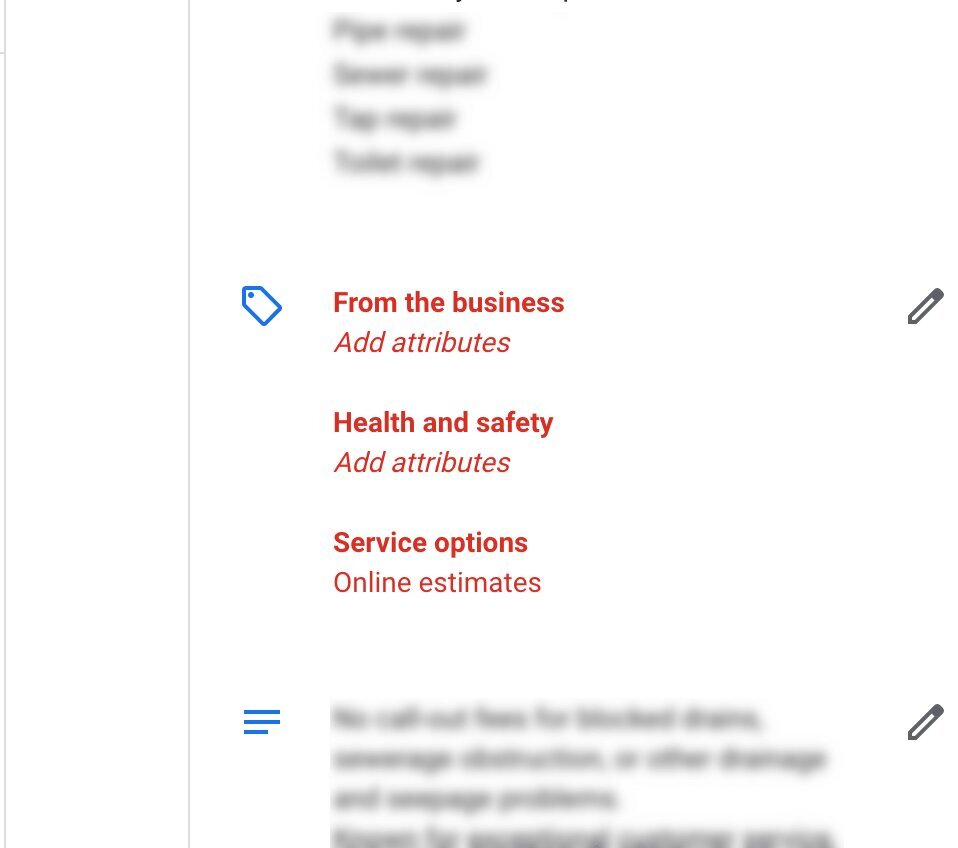 Ideas?
Solution
@JoyHawkins based on a recent discussion with Google and a quick test, I believe this bug has finally been fixed.
@Margaret Ornsby, I'd recommend testing pushing through your updates on your listing to see if the issue is resolved on your end as well.
Sort by date Sort by votes

My hunch is this is a bug.

I'll escalate that thread and see if I can get an answer from Google.
Upvote 0 Downvote
I

JoyHawkins said:
I'll escalate that thread and see if I can get an answer from Google.
Click to expand...

@JoyHawkins Did you ever end up getting an answer on this escalated thread for Google? We see a similar issue on a clients' listing as well.
Upvote 0 Downvote

@ibweb no, I did not. I think it got lost somewhere but I just pinged Google again for an answer on it.
Upvote 1 Downvote
I

@JoyHawkins thanks for the update and for re-pinging Google.
To give some background from our end, we have spent quite some time coordinating with their support (only via email). It took a long while and multiple tests on their end and evidence submitted (and re-submitted) multiple times on our end, but they did confirm to us that it is supposedly an actual bug (nothing wrong with our data submitted) and that the engineering team was now looking a it.

That said, they confirmed it was a bug as of 1/6/22. They have been radio silent ever since and not been responding to our follow ups. Hopefully, you have better luck getting them moving once again.

If you'd like, I can supply a ticket number to you that you can reference in your follow up given we have an escalated ticket where they confirmed it's an engineering problem.
Upvote 0 Downvote

Sure - that would be helfpul. If it's a bug it's not likely to get a resolution very fast.
Upvote 0 Downvote
I

Unfortunately, it took us a couple months for Google to be convinced it was a bug. Even after classifying it as a bug, it's been an additional 2 months without any additional update.

We appreciate your help!
Upvote 0 Downvote

I heard back and it appears that the issue is not widespread so there are not a lot of users experiencing this issue. What that generally means is that Google is not going to prioritize fixing it so you will likely not see a resolution to this for quite a while.

@JoyHawkins I appreciate that there is a message to be read vs. no response at all!
That's really disappointing. This GBP listing is over 6 years old with about ~200 customer reviews, so seeing it with issues is painful to say the least. Naturally, the listing is critical for the client's lead generation.
Do you have any other ideas how we can get this addressed by Google?
Upvote 0 Downvote

No, I don't. They prioritize stuff based on volume. I honestly wouldn't stress about it at all. Services don't impact ranking at all and if they do impact conversions, the amount they impact them is small enough it's not even measurable.
Upvote 2 Downvote
I

@JoyHawkins unfortunately it's not the services that are marked red for us. The attributes themselves are marked red, and we can't update them or accept the changes.
Every time we do, it just says "an error occurred, that's all we know." See the attached screenshot that shows which fields are stuck for this company. 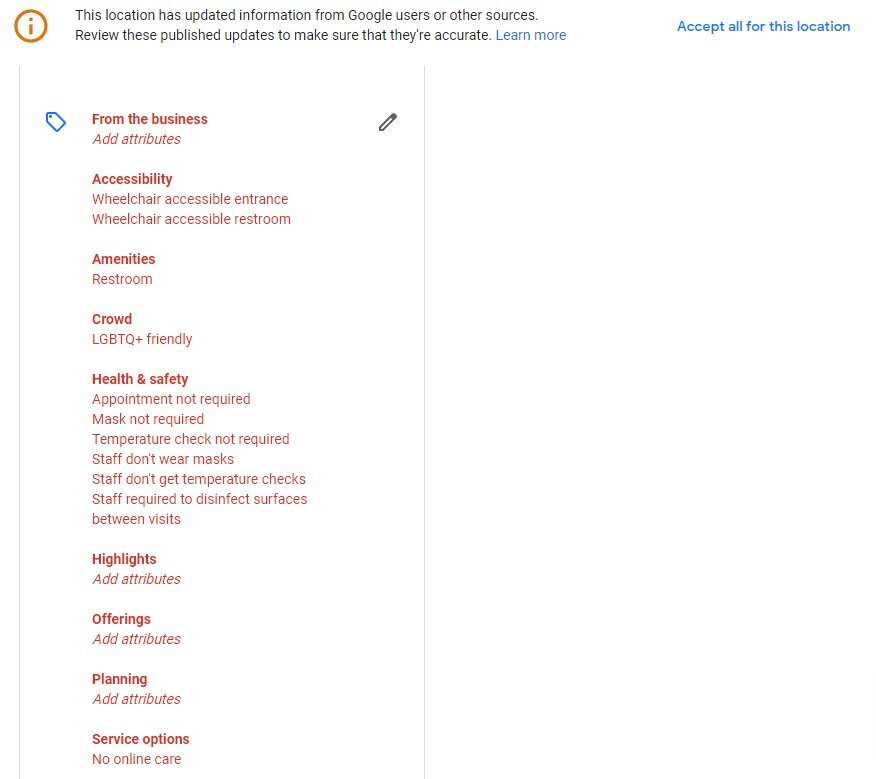 @JoyHawkins thank you for the update and unlocking the thread. I'll look for updates on that forum. We really appreciate your help!
Upvote 0 Downvote
I

@JoyHawkins based on a recent discussion with Google and a quick test, I believe this bug has finally been fixed.
@Margaret Ornsby, I'd recommend testing pushing through your updates on your listing to see if the issue is resolved on your end as well.
Upvote 0 Downvote
Solution

@ibweb - the problem disappeared as mysteriously as it appeared.
Upvote 0 Downvote
I

@Margaret Ornsby, yep! Google acknowledged it was a bug, but unfortunately it only impacted a smaller subset of users and there was a workaround present, so it wasn't a super high priority to resolve.
That said, they did reach out to us to let us know the bug is fixed which is much appreciated.
Thanks for confirming it is back to normal on your end as well.
Upvote 0 Downvote
J

These bugs - including red attributes text and subsequent attributes not updating - has been a constant problem on this end for multiple clients and years. Google local business is just suuuuper buggy. When manually adding posts, photos don't resize, you'll add...lets say 4 photos and when you publish it publishes 4 of the same photo and deletes the other 3. Its just such a janky, budget back end. Funny they can't fix this or its just a low low priority.
Upvote 0 Downvote
I

@JRS have you re-tried pushing any GBP attributes through that were previously red after my post on 5/26/22? That bug should be fixed now.
Upvote 1 Downvote
J

ibweb said:
@JRS have you re-tried pushing any GBP attributes through that were previously red after my post on 5/26/22? That bug should be fixed now.
Click to expand...

I'll let you know. I've updated a few and it seems to be going a little smoother but it takes time for them to get 'kicked back out' again as well. Will let you know. cheers
Upvote 0 Downvote
You must log in or register to reply here.

Being filtered? Nothing appears at that address though.

G
Question regarding ranking in other locations..