As many know, Google has been testing their new ad product, Home Service Ads, in the SF Bay area. Last June Google announced at SMX that the future "3 Pack" would include one "sponsored" listing.

Make that all three! We manage the local GMB listing plus AdWords account for a locksmith in Oceanside, CA. Google reached out to him in August to join the program that will be expanded to the greater San Diego market (and others across the US) in November. The program is powered at this point by AdWords Express only.

I'm not a big fan of AdWords Express and was curious what my Agency Development Manager at Google thought about this program. He wasn't intimately familiar with the HSA program but contacted the folks in Mountain View who are involved with it. I was invited to call the HSA account manager directly which I did. I asked her:
1) Where on the SERPs will ads appear?
Top of Page One and she directed me to search Google for "Plumber in San Francisco". The result are three "sponsored" listings. No organic. 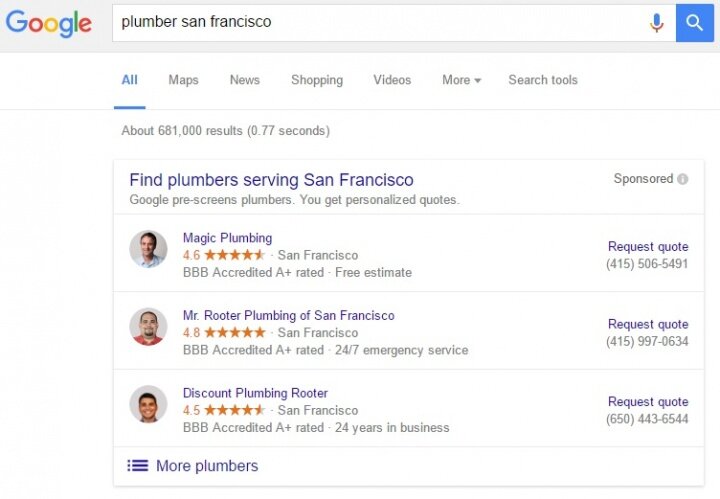 2) My client claims that Google told him that his GMB listing was going away and that he would have no local visibility unless he signed on with HSA. Is he correct in this?
Basically yes as the HSA program rolls out to more metro areas.

3) Obviously there are more than three plumbers in San Francisco. Will the HSA listings be rotated? If so, on what basis?
Yes, based upon the business "ratings", or reviews on Google.

4) Are there any plans to to tie the HSA program to conventional AdWords?
Yes, eventually. But for now this is driven by AdWords EXPRESS. Any conventional AdWords campaigns targeting the same or similar keywords, physical area, etc. will need to be disabled.

5) Given the lack of keyword control with Express, will the CPC of these broad matched keywords be the same as conventional AdWords?
No. Advertiser is not charged per click but per phone call received that last > 30 seconds, thus a forwarding number will be provided. Similar to AdWords' "Call Only Campaign" except ads are visible on desktop as well as mobile.

I'm sure I am not alone in my significant concern with the Home Service Ad program. The death of the local pack for most, or all, home service business categories is upon us.

I guess this is a way to combat spam, and for Google to make more money. Monopolies will do what they do.

I typed in the search "Plumber in San Francisco" to see what happens. Wow, its completely different. Google taking even more control.

And the link to the website is really buried. Nobody is going to find it there.

Upon further research about the HSA:

[h=1]The Google guarantee[/h]When you book an eligible home service provider on Google, you are protected by the Google guarantee. If there is dissatisfaction with work quality, Google may refund up to the amount paid for the job.

A little more investigation...
Not all of the ratings are adding up properly. One of the plumbers listed has 11 ratings listed, but has many more reviews than that. Do the older reviews not count as the new program takes over? hmmm.
C

The review count appears to be # of reviews marked "Google verified job" - I assume meaning reviews of jobs booked through the new system. Which seems perverse as the new 3-pack members will, by definition, mop up more reviews and so stay in the pack

It does seem that a lot of Google's attention as of late has been focused toward removing spam from HSA industries. I wonder if all three spots will be pay to play regardless of population density/competition.

Thanks for sharing Jim and everyone else for feedback.

I did a post and screenshot a few months ago showing all 3 HSAs being paid ads, with no free pack showing - but much of that other info was new to me Jim.

Sounds like they are ready to roll out more broadly.
Wonder if they will expand to more categories too?
C

Google is figuring out to better monetize these listings.

Take a look at Hotel Price Ads (HPA) for any hotel searches. That's where Google is going to go for any broad searches that lend themselves to a monetization model.

Looking long term, I won't be surprised to see more and more ad or hybrid results in places that pure organic listings once dominated.

Would be great to hear from the GMB team if their product is headed toward being obsolete in the home services area. Or any area for that matter. If it works for Google in home services, why not the rest of Google?

Honestly, I just really can't see this being rolled out as is to the rest of the United States. Google is much smarter than that. Well, I hope so anyway.

Josh that is a great point and I went hunting for road blocks to them scaling it across cities/markets and one major holdup, in my opinion, would be this qualification:

Background checks and screens from online sources are required to ensure a track record of high-quality service.

I don't think they have the man-power (or customer service skills) to gate-keep like this at scale. YMMV.

mborgelt said:
Josh that is a great point and I went hunting for road blocks to them scaling it across cities/markets and one major holdup, in my opinion, would be this qualification:

Background checks and screens from online sources are required to ensure a track record of high-quality service.

I don't think they have the man-power (or customer service skills) to gate-keep like this at scale. YMMV.
Click to expand...

Scale is a good point.

I wonder though if they just bring on the man power to do it. I mean, why test it if you don't plan to do it in other places? 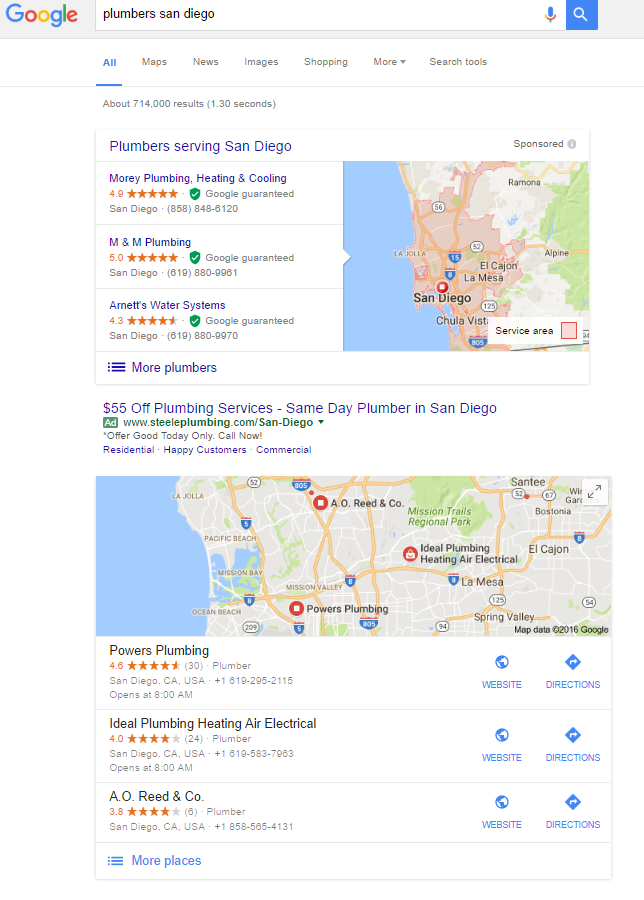 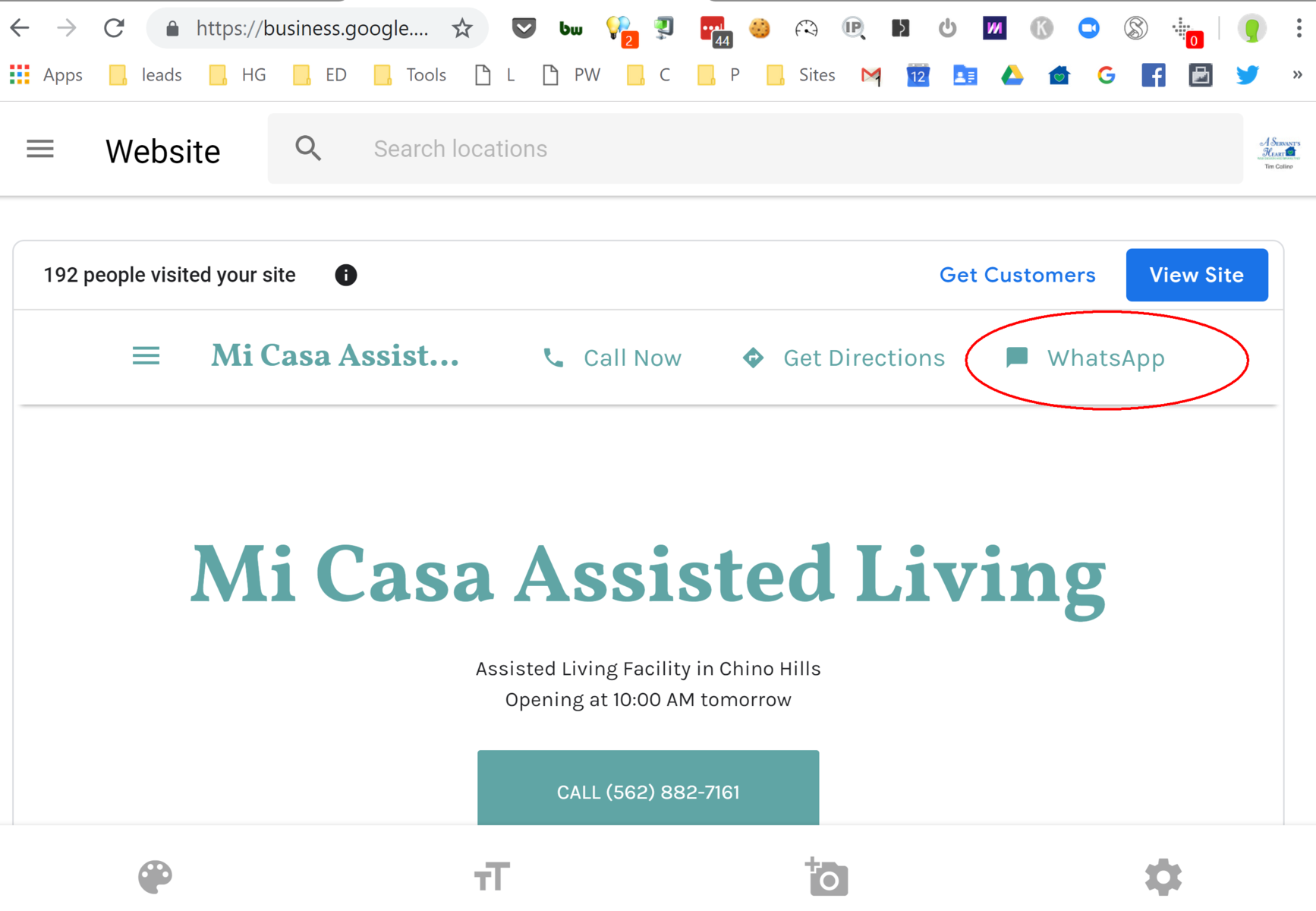 Disappointing they're moving along with this. But who knows. Maybe it will mean better results in the end. We never know I suppose.

Surely they take out the local finder?

The Local Finder is there. It shows the guys with storefronts only.

7 plumbers total and 13 locksmiths in the entire city...

JoyHawkins said:
The Local Finder is there. It shows the guys with storefronts only.

7 plumbers total and 13 locksmiths in the entire city...
Click to expand...

I'm with you, just wanted to try to stay positive 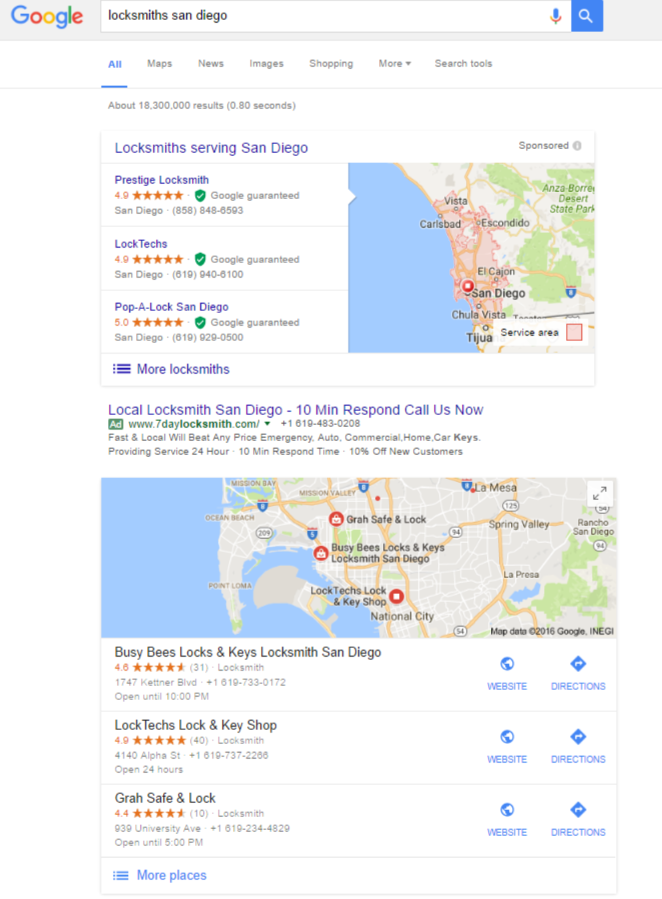 Check out plumbers San Diego BEFORE the change.
(I still have the old results) 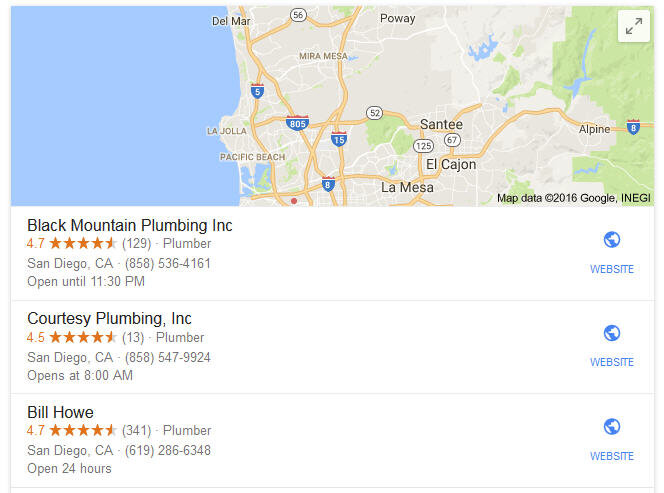 ​
The 3 that ranked in the pack before the change had addresses hidden.
After the change - in Joy's bottom screenshots - those 3 businesses are totally gone!

I believe some of them are gone because they never did advanced verification.
But a good majority in SD had hidden addresses, so that's why so many are gone too.

What if you were one of the guys in my pre-change 3 pack...
and if you went to the trouble to go through advanced verification...
Then this change comes and you disappeared even though you did AV???

Yep, 7 plumbers. I stopped counting after page 3 so I knew there were more than 60

Here is the before and after screenshot of the organic 3-pack. I think the Search Engine Land article is due to publish Monday with all my screenshots so I will share here.

I'm also messaging back and forth with Jim to try and confirm if the HSA unit is paid or not since he has a client in it. It *might* not be as bad as I thought. It might be free....

If that's the case, the "sponsored" messaging is so beyond stupid and confusing. 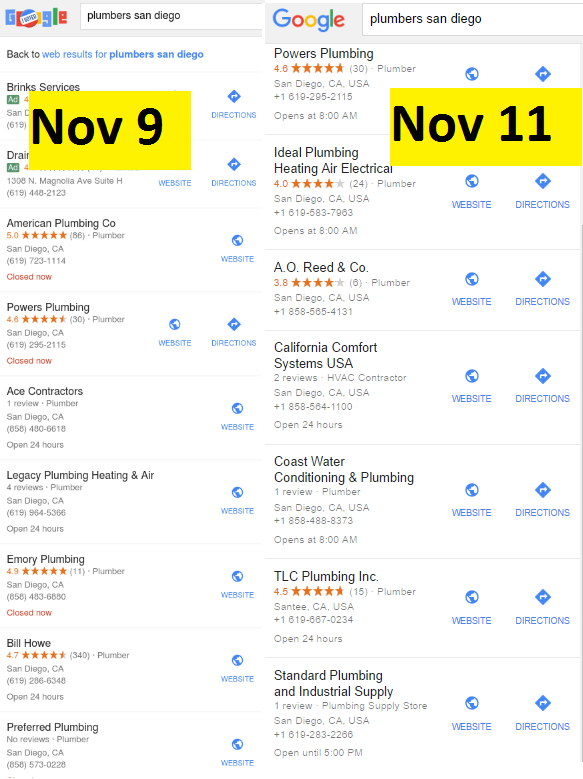 Here are all my findings so far: http://searchengineland.com/googles...-diego-just-dropped-89-listings-3-pack-263222

Great article, Joy. Thanks for always keeping us up to date!

I honestly wonder what Larry Page would say about how they're treating Local. It seems to be opposite how they treat pure organic. That SERP is incredibly confusing. Good user experience is simple experience. This is all so complicated. I wouldn't be surprised if it pushes people away from Google for local searches. I think I'd rather just search Yelp.

Speaking of, they must be on Cloud 9.

Funny that you mention Yelp. I think this has the possiblity of killing their organic traffic for some of these SERPs. They dominate organic but with the addition of this 2nd pack I think it steals a ton of traffic away. Of course, that's me just basically just guessing, it would so sweet if I had access to these people's stats!
You must log in or register to reply here.

Show ad in local 3 pack, as much as possible, outside your own city/village

C
Are there any work arounds on a GBP listing to get service area businesses to rank in the map pack?