While there are of course many many factors, the 3-pack in my estimation places additional weight on the following in addition to the "normal" non-local organic ranking factors (including backlink profile and on-page factors)

I've not seen any discernable patterns in any other local-specific ranking factors that indicate a significant weight approaching the weight of the above four.

You may or may not see the Wild Rabbit in your own results but this is a classic example where you have a 3-pack result in a very large, relatively saturated city, and one of the businesses listed:

A. Has an address not in the intent city (Los Angeles) but rather the neighboring city of Glendale (I forget how I determined this, I think the address was not previously hidden back when I first discovered it, but would be nice to find a way to discover the physical address even when address is hidden to make sure I am still correct that they use a Glendale address. I'm 95% sure.)
B. Has no organic rank on page 1 outside the 3-pack
C. Has no reviews or ratings for their GMB listing
D. (In my case) is not the closest to my (the search user's) location
E. Has absolutely no search keywords in the business name

Any guesses why it's ranking so well?

The only thing I see is their website is a SquareSpace website and on their contact page they have embedded a huge Google Map (via SquareSpace's API) with their location pin set on the center of Los Angeles.
Last edited: Nov 20, 2018

Hey @consultant My guess is that it's partially related to the "Their Website mentions drone company" snippet. That indicates a strong signal to Google related to their website.

Noticed also their work example page has some high profile clients. I'm guessing that they may have some strong backlinks from those projects.

Age of their Google business listing could be a factor. They may have been around much longer than the drone companies.

I would vote to check on the age as well. Its the hidden ranking factor that baffles many local seos if you dont know to look for it.

That site uses lots of structured data. That's worth exploring.

Each page of the site uses the WebPage schema with both "drone" and "Los Angeles" in the description. Those two keywords can be found throughout the structured data.
Last edited: Nov 30, 2018

you think structured data is that heavily weighted as a ranking signal?
C

I noticed the snippet about drone company being on their website too. But if you look at the home page source code, that phrase appears nowhere! Domain was registered in 2015 which is probably older than 80-90% of the other drone companies out there as the boom only started about 2-3 years ago. But somehow I'm not convinced this is most likely the main factor.

My gut tells me Stefan is onto it possibly. This leads me to a side question about schema markup.

chadkimball said:
you think structured data is that heavily weighted as a ranking signal?
Click to expand...

Chad, I'm guessing from your question that you don't think structured data is a very strong ranking factor. I don't either.

I suspect that the schema convinces Google the site is relevant to searches for "drone" and "Los Angeles". As for ranking well, the first thing I would look at is backlinks. These two could satisfy Google's pursuit of "Relevance" and "Prominence", respectively.
Last edited: Nov 30, 2018

Each page of the site uses the WebPage schema with both "drone" and "Los Angelos" in the description. Those two keywords can be found throughout the structured data.
Click to expand...

Are you talking about the data highlighter in Google Search Console? 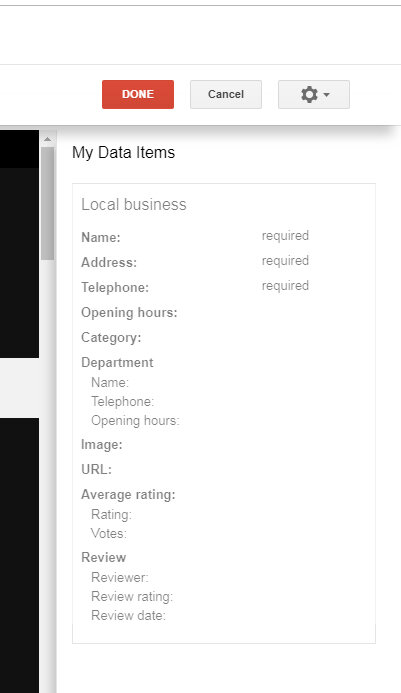 SmallBizGeek said:
Are you talking about the data highlighter in Google Search Console?
Click to expand...

Data highlighter is a way for you to help Google better understand the structured data on your website. Obviously, you can only use it on sites for which you have GSC access.

You can use Google's structured data testing tool to examine the schema on any URL, which is great for checking out what your competitors are doing.

You can also use it to test a code snippet that you've written. This is really useful because Google is not 100% compliant with the schema.org vocabulary. See the section "Structured Data Format" on this guidance doc for details.

I see that the data highlighter is limited in what data type can be chosen. It seems markup is the better option.
C

I've been examining more search results looking for similar situations: businesses with very poor organic rank, no reviews, no keyword in the business name, etc. that are making it into the 3-pack. I thought I was starting to see a pattern with age. There was a drone company in that situation that the domain was 2011 and had been in business since 2005. That's unheard of in the Drone Service Industry. But then for another major city I found the exact same situation and it was a 2017 domain name. So while I'm sure age is a factor I don't think it's they key in these 3-pack results that have very weak signals otherwise.

I think the backlink signals, while of course play a factor, can be rules out as otherwise you would see them in the first page of organic results. 3-pack listings are usually in the top 5. Not always but there is a VERY STRONG correlation. So I am disregarding investigation of backlink profile in these cases.

So let's assume it's not age and it's not the backlink profile for argument's sake. My gut at this point is pointing towards 3 possible factors:

1) Structured schema data. I am skeptical on this one. Why? Because it is too easily manipulated/controlled by the SEO professional.

2) Proximity of business to the geocenter of the city being searched in/for. (There is an effect on user location even if there is a location name. But my testing I am both searching from a user location far away from the location intent city [example: user in Dallas, enters "Los Angeles Drone Company", versus using the Adwords ad preview tool to set the location to Los Angeles]

This #2 I think is a leading candidate as the Wild Rabbit site both specifies LA for the organization location, and they display a Google map with pin dropped at the city center. #2 could be considered also part #1 if the organization schema's location pointing to LA is the key.

3) Sort of a long shot, but if anyone's is doing local seo for multi-location businesses and also read the latest Moz survey report, one of the common threads is Google has gotten smarter about "virtual locations/addresses" The question in my mind is has that also affected home-based service businesses? Is Google giving preference to businesses with addresses in commercial buildings and/or city business centers?

If we look at the Wild Rabitt address obtained from the LocalBusiness schema, we see that they are indeed in a commercial building in a business area. But although maybe drone services high a higher than average percentage of home addresses, I'm sure in LA there are plenty of other drone businesses with GMB listings and better organic rankings that would be in the 3-pack. So skeptical on #3.

Here's another similar one to look at: denver drone companies

"Denver Drone Videographer" is similar to Wild Rabbit, although at least they have the word drone in their business name. Domain is new (2017), poor organic rank, no reviews, yada yada. But what do we find? They are using the deprecated ProfessionalServices structured data schema. Even though it's deprecated I'm sure it's still used by Google.

So at this point, things *seem* to be leaning towards schema being a significant factor.

The address in the schema looks to be downtown Denver highrise residential but near lots of commercial businesses and only 1.2 miles from Google's center point for Denver CO.

Suggestions for Local Pack Rankings of a Business for New Location

Dec 17, 2022
Dibraco
D
A
What's the consensus in 2023 for service area businesses ranking in cities away from their physical address?

C
Are there any work arounds on a GBP listing to get service area businesses to rank in the map pack?