Jason Brown posted this in our Facebook Group so I thought I'd check a client and yep, sure enough, he's lost reviews recently on Yelp as well.

Maybe he'll be at 0 by the end of this year? 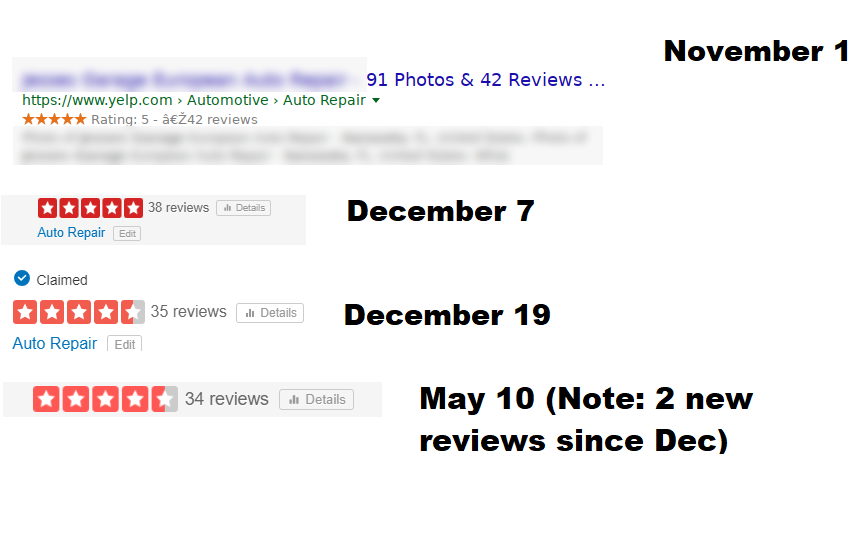 @JoyHawkins, it's hard for me to tell. Checked out a few clients' Yelp reviews. The only cases where I see strangely high numbers of recent reviews in the meat locker are where the reviewers aren't active Yelpers. Their reviews probably would have been filtered anyway.

There's a certain amount of fluctuation that's normal on Yelp, as you know.

But it'd be interesting to hear if there's a pattern.
M

It hasn’t gotten any stricter since the algo update in late October of 2018. Where thousands of reviews were wiped out in a matter of weeks. I have several clients who obtain new reviews, and when they stick, yelp will then remove 1-2 reviews that have been up for years. Almost like a trade off if you will.

There are also now 10 sponsored ads above the organic listings on yelp. There use to be 2-3. Now if you’re holding the first spot organically for your industry, you’re really 11 due to 10 paid links above you. See it across the board in the service industry.

You will see tons of business owners talking about this exact situation, and reviews being swept under the rug (way more then usual).

Also of note- the billion dollar bully which will be released on May 22nd, added a late piece in their film to touch on the October 218 review wipe.
Last edited by a moderator: May 11, 2019

Phil Rozek said:
The only cases where I see strangely high numbers of recent reviews in the meat locker are where the reviewers aren't active Yelpers. Their reviews probably would have been filtered anyway.
Click to expand...

I'm not seeing a big change this time either.
J

Yelp is a joke , to me they are like Ebay several years ago. Ebay at that time changed their tactics and made it more buyer consumer friendly. Where feedback changed and they launched dsrs for sellers and were strict. It was a horrible move. Sellers were banned for very strict guidlines if you had a 4.5 star rating you were banned. They only concentrated on the buyers and the sellers left in masses for Amazon.com .

We now see the difference between Amazon and Ebay is today. Ebay reversed all those changes and once again are much more seller friendly and slowly they are growing again, but they lost the battle with Amazon because of that mistake.

I feel Yelp has made the same mistake and vendors are finding greener pastures.

What is interesting is in this case, Yelp filtered out several reviews for this business yet, left the user’s other reviews intact. It does appear that Yelp is targeting this business and not the profiles.
You must log in or register to reply here.