Huge Change for Service Area Businesses in Google My Business

If someone creates a brand new SAB listing, I'd love to hear about whether or not you are required to provide an address for verification. This seems unclear.

@Yan Gilbert I've only seen this applied for listings with addresses hidden. I don't think there is any automatic suspension for storefronts that have tons of listings at the same address.

MiriamEllis said:
If someone creates a brand new SAB listing, I'd love to hear about whether or not you are required to provide an address for verification. This seems unclear.
Click to expand...

Yes you still need an address to verify, it's just not associated with the listing.

We're all going to be in for what the ancient proverb calls, "interesting times" !

What's really annoying is GMB won't show you a map of exactly what territory is covered when you add a specific city to target.

Let's say you put in "Los Angeles, CA." Does that cover only LA proper, or also some of the suburbs, or LA County, or the whole general area? Does that make it necessary or excessive also to add a bunch of additional cities or ZIPs?

I guess they could bring back the "preview" map that you'd see up in GMB when you specified your service area, but I'm puzzled as to why Google didn't just keep it from the get-go.

Just a heads up, my own listing was previously marked as a hidden SAB. When I checked my account to see the update I noticed that the address that was previously there was now missing. Only the areas that I had previously chosen were showing. I added my address (the same that was there before), I am assuming this will make not a hidden SAB anymore, and once I did that, it is making me re-verify my address by postcard.

Wanted to run some tests but have to wait now.

If anyone has an account that is showing their address but has chosen a service area that is not where their address is, let me know so I can run some Falcon scans on it.


Phil Rozek said:
Let's say you put in "Los Angeles, CA." Does that cover only LA proper, or also some of the suburbs, or LA County, or the whole general area? Does that make it necessary or excessive also to add a bunch of additional cities or ZIPs?
Click to expand...

We could test that. Need a business listing that has a small service area chosen. If too big an area is chosen, it'll be harder to tell because of a natural drop-off in rankings. Falcon scan could show us if the there is a hard drop off at the perimeter or not.

I know that the radius that was previously there as a choice meant little because I've done scans that rank a business past the radius range.

All I meant was it would be great if Google showed a map of where your service area nominally applies. 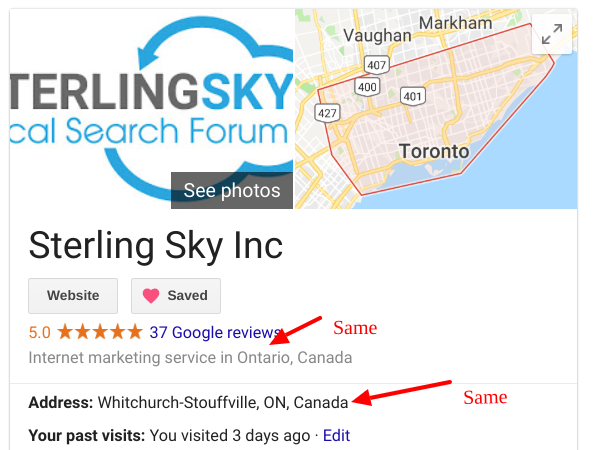 @Phil Rozek, do you think that maybe Google will be going by the boundaries shown on the Map?

I think it's a possibility.. To be safe, it might be a good idea to use zip codes for places like this where Google might break a city up in this way.

Just checked Steady Demand did not rank in river place Austin before, since it was broken up like the map above and it is now

@Cherie Dickey, it's possible. I'm not sure. Google hasn't made it clear what's covered and what's not, in no small part because I still can't see the map at the top of the knowledge panel. (See Photos not appearing in knowledge panels in Chrome?)

Just in the name of "belt and suspenders," I've put whole counties in the service area of some of my clients' pages.

Great discussion. Thanks for bringing it up! I just saw these new features. So is there any use of this "Add service area" feature for brick-and-mortar businesses?

I'm assuming citations (as a ranking signal) will still be associated with whatever address you use to postcard verify the listing?

I would assume that the address doesn't matter provided there is a name & phone number match.

Agree with Joy, the address is (and always has been hidden) so there would be no impact.

I could see this shifting the landscape quite a bit if google doesn't factor addresses (even hidden one) into the citations count. Especially in the case of bigger brands that have one phone number and the same business name for many different listings in a city

@JoyHawkins, what is your thoughts about "Add service area" feature for brick-and-mortar businesses? Is there any use for this feature for businesses like restaurants, spas, bakeries and other businesses which serve customers at company's location? Thank you!,

As of right now, it does nothing. Time will tell if that changes.

For now, I would advise no one add their address back in if Google wiped it out. It causes a verification to trigger.

As of right now, it does nothing. Time will tell if that changes.

For now, I would advise no one add their address back in if Google wiped it out. It causes a verification to trigger.
Click to expand...

Thanks Joy!
The addresses of our brick-and-mortar clients were not wiped out. They are there. But you would still suggest not to touch "Add service area" feature for these types of businesses because it won't change anything? Did i understand you correctly?
Thank you!

Yes, no need to add service areas as it will do nothing.
You must log in or register to reply here.

A
What's the consensus in 2023 for service area businesses ranking in cities away from their physical address?

How to Win at Local Search with Service Area Businesses