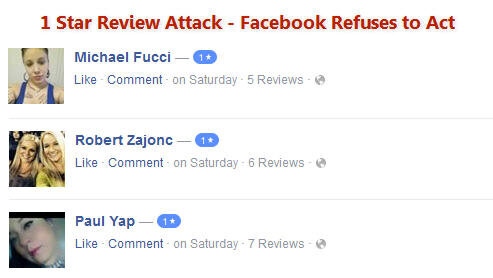 What do you do if your 135 year old, well established, highly regarded local business gets attacked by a negative fake review campaign launched by a competitor - trying to take you down? You fight back and ask for online help!

I've been watching a story unfold on Inbound about Long's Jewelers - a family owned jeweler in the Boston area that's been around for over 135 years. They've worked hard over the past few years, and built up close to a 5 star on their Facebook page.

They've been bombarded now with 2 attacks of 1 star reviews on Facebook, trying to bring their great standing down.


The reviews are OBVIOUSLY NETWORK SPAM - the easiest type to track down
AND the type that is the easiest to get Google to take down too.

But Facebook REFUSES to even acknowledge or take them down.​
Below is the story on Inbound where Lynelle Schmidt, who works for Long's reveals the story and asks for help. I'm here trying to help spread the word and we are hoping we can get Facebook to take these down!

We received 100 fake one star reviews on our Facebook in a matter of minutes...and Facebook refuses to take them down.

We felt extremely proud of the almost 5 star review we accumulated over the span of four years on our Facebook page. It took us a long time to get to this point. And after all the effort we've put in this last year, I'm very proud of where we've come...

Sadly, all this hard work came crashing down for us this past Sunday. I was so disheartened to see that someone had hired over 100 people to give us fake one star reviews. In the span of just a few minutes, we went from a gleaming 5 star reputation to just barely over 2 stars.

I felt so crushed by this. As a social media marketer, I felt all my hard work go down the drain. Star ratings are crucial for retail businesses like ours... And when all of your competitors have over a 4 star rating, you can imagine how a 2 star rating looks.

As crushed as I was to see that someone would do this to us, I was even more upset when I went to try to contact Facebook to remedy the issue. Not only did they never answer us, we had to go through some serious back channels to even get them to respond.

And that response was - no, there is absolutely nothing we can do for you. All 100 of those reviews that clearly came from fake profiles within the span of just a few minutes didn't serve as enough proof to Facebook to consider them fake.

These "reviewers" live in fake places, went to fake colleges and had all rated the same businesses with the same rating at the same exact time.

We are now branded permanently with this low rating.
Click to expand...

So Long's worked to try to get existing customers to leave more reviews to try to counteract the attack. They were able to build their stars from 2 - back up to 4.1 last week. Then a couple days ago they got hit again with another rash of attacks.

One obvious telltale sign of "network spam reviews" is when you can see patterns, like reviewers reviewing the same places.

Funny that these reviewers live all over the place and all gave Longs in Boston a 1 star reviews.
And they've all also been to Egypt and gave 5 Star reviews to Sunrise Holidays Resort in Hurghada.
And there are many other companies they have all reviewed in different parts of the world.

"Really does look fake. I looked at a handful of profiles, and they all rated the same places. On Sunday, four people all rated the jewelry store in Boston, a sexologist in India, and a handyman service in Las Vegas."


Come on Facebook!
Google would investigate and pull this kind of network spam in a flash.

Do the right thing!​
Please share the post and help spread the word. And/or report some of those fake reviews to try to get them taken down.

Just need to let them mainstream media get a hold of this. Unbelievable. If they do, Facebook's brand is about to take a hit.

Update: FB finally agreed to look into it. But they have not taken any action as yet.
You must log in or register to reply here.

A flood of 1-star reviews

Feb 28, 2022
KVial
K
E
How to remove a review with personal attacks contents even after writing to Google support?