Warning: If you have a merged Local Google+ Business page, log in, check the edit details screen and be sure the bots didn't go wild on you.

Based on 2 situations I just ran into I think bots are adding categories like mad.
Bogus categories that are violations to boot!

​
You know how there are no custom categories and there are lots of categories missing that businesses feel they need? You also know how Google adds the "at a glance" snippets based on info she scrapes?

I predicted awhile back, I think Google was going to do this with categories. Pick our categories FOR US, based on info she deems important. Yes, I know she's been adding cats for a long time even on the old Place pages. But that was usually one or 2.

I'm working with a Pediatric Dentist. His listing became disconnected in blended and I could not find anything wrong that would cause it. No mismatched NAP, dupes, violations or anything. They had merged before they came to me (which I would have recommended against) and most of their problems so far have been because they merged with G+. So since they've had so many problems, I KNEW they would not go in and change anything without asking me, so initially did not think to log in and check their data in the dashboard. Logged in for another reason and here is what I saw.

​
The only cats they added were Pediatric Dentist + Dentist. Google added the rest.

Google added "Dental" which is a violation of the category rule. Doctor - which they are not, emergency services - which they are not, health - again a category violation, POLYCLINIC. I didn't even know what that was and had to look it up. I've never heard the term used in the US but I think it's sort of like an Urgent Care clinic. And added Company (yes company by itself as a stand alone category).

When I went to the next screen, most of those categories were either violations or incorrect. Most had red labels saying "This category is invalid"

So next I checked my own merged Google+ page to see if it was just a glitch on their page OR a possible trend. In my Google+ dashboard the only category I had listed was: Internet Marketing Service.


Look What Google Did to My Listing

The ones in RED are not only incorrect but they all violate Google's own category guidelines.
Check out the category edit screen. 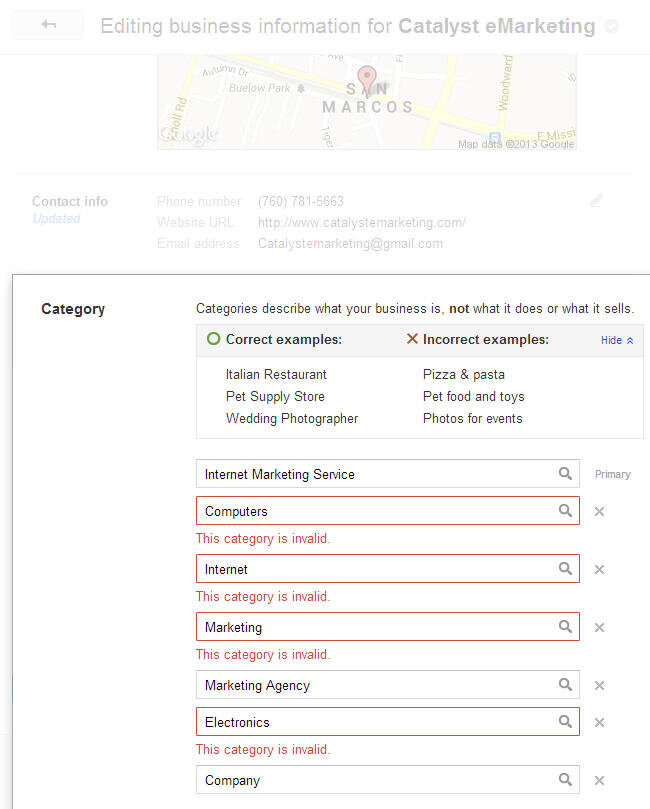 ​
Most all of them say "This category is invalid" but Google added them, not me!

FYI, in the case of the Pediatric Dentist the bad cats were not showing up when viewing edit details OR on map maker. (But in dash it said "Google has already updated your listings") On my listing since address is hidden and Google deleted SABs from Map Maker you can't view either one.

So my point is you need to log in to the Google+ dashboard and click edit details to check your categories.

Double check your listings and let me know if you suffered a category bot attack!

Just spot checked a few of them (both merged and not merged) and all had the "bot attack". With the tons of pages that I manage, I will now have a lot of work ahead of me to correct each listing. As Charlie Brown would say....UUUUGGGGGHHHHH!

ALL had the "bot attack" both merged and not merged?
Were some of them category violations like the ones I showed?
Thanks for checking and reporting back so quickly Scott!

Oh man, my spidey senses are tingling and telling me this could be widespread.
I'll alert Google to this thread.

Keep the reports coming if you spot a problem...

After checking a few more, not ALL, but definitely merged ones and so far, just a few of the others.
W

I saw a strange thing with the coverage area last week. Google added a bunch of areas that had similar names to towns in this client's coverage area but the towns were in foreign countries. I assumed it was an isolated incident but it might be similar to Google adding strange categories.

Ahhh, that's weird too. Thanks for sharing Wade! Could be related. Sounds like some type of filter is just set way to loose or something?

You know I just remembered a complaint at the Google forum where someone said Google added cities to his service area. But I'd never known bots to go into a dashboard and add that type of data, so assumed it was operator error or miscommunication.
W

I would have taken a screen shot but didn't think much about it. Assumed it was google adding location preferences to Google+. The week before we couldn't edit the coverage area. Then I find out that locations in the UK and Alberta were designated as part of the coverage area. The edits I made last week have remained. It is just like the old Places system.
But this biz isn't showing in local results for the new areas. Yet.

YIKES! Thanks for the update... We're checking through all of our auto dealers, and so far 100% have been hit...

Why the heck would they do this? Seems really idiotic to go through and hose so many listings with auto-added illegal categories... but then, this is Google that we're talking about...

Greg Gifford said:
YIKES! Thanks for the update... We're checking through all of our auto dealers, and so far 100% have been hit...

Why the heck would they do this? Seems really idiotic to go through and hose so many listings with auto-added illegal categories... but then, this is Google that we're talking about...
Click to expand...

You know what though. I feel bad. I think I noticed this on my own listing a couple weeks ago. But I was flying around looking for something else and I don't really use my own listing per se, except for testing, so didn't really pay attention at the time.

But when I saw the problem on the Pediatric Dentist's listing I remembered seeing something odd on mine so went back to check.
W

Google added "Company" as a category to another client. I believe that is a violation as well.

Just found "Business Related" added by Google as a category in the dashboard.

Plus three other categories marked as "This category is invalid."
Latest Blog: [Quiz Result] Can a Food Truck Have a GMB Listing If They Don’t Have a Perman...

I reported to Google. I think they'd like more examples so if anyone has any they care to share that would be great.
W

Screen shots, account names? What is best way to report it to you?
I already changed the one with "Company" as the category. The change was "Pending" for less than 5 minutes and then accepted. I can't give a screenshot of that one but can send you the link to the Google+ local page.
I'm sure I will find more.

Sorry, thanks for asking me to be more specific. Just a link is good. Even if you already fixed the cats,
I assume Google can see the edit history to see the bad cats that were there.

Wanted to stress again - you need to log in to check whatever dashboard you manage your listing with. It's been reported in both the old dashboard and in my cases it was merged listings in the G+ dashboard. Mike Blumenthal's client, when you click "edit details" on the live listing, it showed all the bad cats. BUT with my Pediatric Dentist none of the bad cats showed live and of course with SABs, Map Maker and edit details don't work. So log in and check.

However, I'm not 100% clear if that bot just took the categories from the G+ dash or if he is the reason for the info showing in the dashboard in the first place.
Latest Blog: [Quiz Result] Can a Food Truck Have a GMB Listing If They Don’t Have a Perman...
W

In the process of changing this one. Google added "heating" and has a message saying "This category is invalid". It also added the "Contractor" category but there is no message beside it.

There seems to be a pattern. All but one of my garage door clients had "company" added as a category.

Thanks Colan. Thanks so much for examples Wade!

I just checked a Plumber I don't know, so I'm not sure what's in dash. But it follows the same pattern, so I think many of the red cats were likely added by Google.

So like Wade's above Construction was added and the telltale "Company" is at the end.

I got nailed as well, and the funny thing is that I am an SAB which shouldn't be in Mapmaker as far as I know. 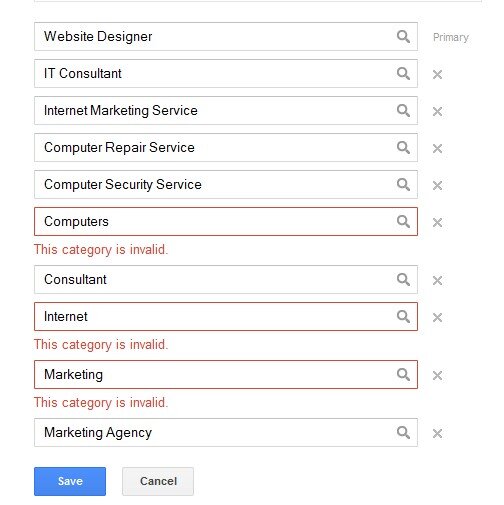 Thanks Daniel. Ya Colan and Joy's company got hit with most of same categories you and I did.

Except we all got the wonderfully descriptive category "Company" but you didn't. To me so far that was sort of the telltale sign or common thread I thought was that company. But since you don't have it, I guess not.

Thanks Linda and others for reporting this error! We've got our engineers on the job to fix them pronto.

In the meantime, please don't edit the categories. We'll get it resolved on our end.