Over the last 2 weeks I've been experiencing odd name changes to some of our hotels. Google seems to be displaying a different name in the knowledge panel than it is in Maps, local 3-pack, GMB, and Local Finder.

I have seen this for over a dozen hotels at this point and am wondering if anyone else is experiencing this in other industries?

example:
Searching for "Hotel Chicago Downtown, Autograph Collection" will return a KP for the "Hotel Sax Chicago". A name that hasn't been used for this hotel since early 2014.

While poking around, looking for a solution, I noticed that attempting to edit the name using the Feedback function shows me that the correct hotel name is already being displayed: 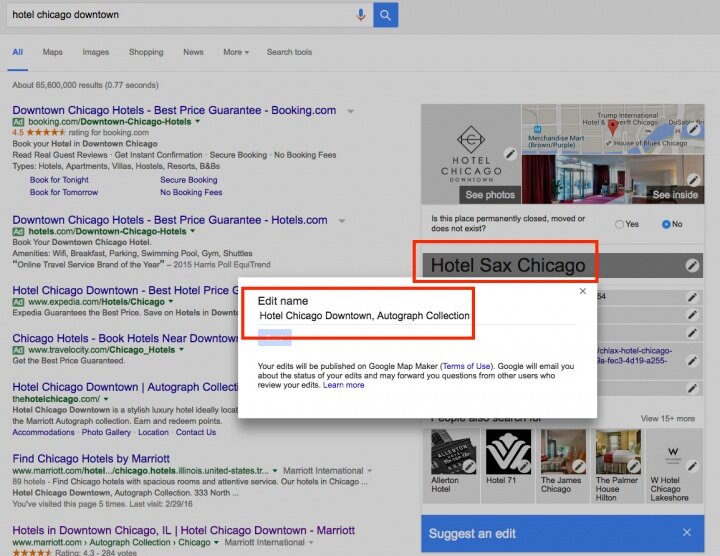 This one is new to me!
We've escalated this to Google and are waiting to hear back. In the meantime, I thought I would share it here to see if anyone else encountered this. This is affecting multiple brands, in many locations.

You know, I've actually been seeing a handful of cases like that lately on the GMB forum. I was starting to wonder myself if it was something I should ask about. I know for sure I've seen it twice in the last two weeks, and I'd never seen it before. In the one case I was even wondering if there was a behind-the-scenes CID issue or something. It's awfully strange to look at a GMB profile and see one business name, click through to google maps from the profile, and suddenly be looking at a listing with an entirely different business name. The case I saw a few days ago that was acting like that corrected itself in the meantime, which in a way is even more strange. The industry in that case was plumbing and heating, I can't remember or find the other one. It's not broken anymore, but for what it's worth, here's the listing of that was leading to a differently named entity on maps a few days ago (owner is in a rebrand, it was showing the old name in the GMB, showing the new name in maps)
https://plus.google.com/116981396353918004571/about

I'm just including the above in case anyone wants to take a look at map maker or something, but currently it's not behaving strangely.

I'd love to hear too, has anyone else seen a missmatch like this between a GMB profile and the name on maps?

UPDATE (or lack there of)

Google has been giving me the run around on this issue. We have now identified over 20 GMB pages exhibiting this issue and have heard several different reasonings from Google, none of which have resolved anything.

The Hotel Chicago Downtown from my original post is still displaying the Hotel SAX Chicago and the latest GMB support rep I spoke with said it was a bug that couldn't be fixed!

Needless to say, our hotels are getting a bit annoyed by this.


I'll check-in again when I have an update. Hopefully this comes sooner than later.

I've seen this scenario twice in the last couple months and both were in the medical industry where you Google'd the name of a practice and you'd get the name of the doctor instead, yet showing up on the practice listing (with all its reviews and info on it).

What I was told which I attempted to explain in this article is there is a behind-the-scenes field that connects listing and you can have several listings connecting to each other, even if those listings are no longer findable in Maps. The only way you can find them is if you have the CID number and I'm guessing you probably don't have the CID number for the Hotel Sax's listing.

Likeliness is that it was either merged with this one, or somehow connected so Google is pulling that title instead. The solution would be to ask to GMB support to unconnect the listing on the backend. It's a field they can see that we cannot. I would make sure you're dealing with someone in the US before asking them to do that. My suggestion is someone on social support (Facebook or Twitter) since they work out of the California office.

By the way, I couldn't find the listing for the Hotel Sax through all the methods I normally use but it's probably because it's so old. If you have another example you want to share that has changed names more recently, let me know and I can see if I can dig up the listing I think is linked.

I believe the problem in this case came from the redirect of hotelsaxchicago.com. A lot of links are with anchor "Hotel sax", also there is a lot of citation for the old listing that are still alive.

That's a cool search - never seen that before! Where do you determine the kgmid=/m/0ldv2s1 ?

The documentation for the API : https://developers.google.com/knowledge-graph/

Wow. I didn't know about that tool but it looks so cool. Thanks for sharing!

I have another question about the same issue with business names.

Any ideas or observations on this?

valgetova said:
I have another question about the same issue with business names.

Any ideas or observations on this?
Click to expand...

Yes. Wikipedia can definitely also be the cause.

Have you found something that could be helpful for "explaining" to Google the right connection between a Wikipedia article and a business listing on Maps? (except Wikidata, as a structured data tool)

You can submit feedback on the knowledge panel if it's incorrectly linked to the wrong Wikipedia article. I have heard from others that this works.

Unfortunately tried this in vain too many times to believe in the "Feedback" No changes, no answer from Google.... nothing, just angry clients

Oh no. Did you contact GMB support yet about it?

The issue has been raised to all kind of Google Support, but in the end the only thing making changes remains the hard work with Wikipedia and it is often ineffective.

The documentation for the API : https://developers.google.com/knowledge-graph/
Click to expand...

Haven't been able to find an local businesses in the tool.

Am I missing something?

Okay, I have another question

Situation: So I find the CID link of the active business, e.g a hotel "X" and the CID link of the closed business - the old hotel on the same place - hotel "BeforeX". CID-s are different as numbers, but they both lead to the new place on Maps, because they were merged, when reported. However I have access to the closed Map Maker listing of hotel "beforeX", which name still appears in the Knowledge graph instead of the new one - hotel "X".

The question is: How to report the closed listing in order to remove it as a whole and to clear the name of the existing hotel "X" in the Knowledge graph?

Really need an advice or a fresh idea for coping with this.

P.S. Already reported it as a non existing place, duplicate, spam, etc. via Report function - nothing happened and it remains closed but live in Map Maker. Now I wonder if including a link in the Map Maker forum could help?

What you're describing sounds like a move, not a merge. They are very different things in the way they impact search. You can tell it's a move if the Maps URL redirects BUT you can still see the old listing as closed if you look in MapMaker. I describe it in more detail here.

For moves, the record doesn't go away, it just vanishes from the search results BUT the information on it can still technically impact the current listing unless Google disconnects them. Apparently there is an internal feature that only Googlers can see that connects listings on the backend. I talk about that here.

I had a case that happened recently where there was a retired dentist and when you searched the dental practice, you got this retired guys' listing as closed. I asked Google to move it. When they moved it, the results changed and instead I got the practice listing BUT it had his name on the title. All the reviews and details were the practice except the name. So I went back to Google and asked them to disconnect the 2. I don't know what they call this particular feature but they described it to me as being similar to when 1 place is inside another place and you see that show in the Knowledge Panel. I'd go back to them and feel free to send them my search engine article as reference but see if they can disconnect the 2. I'd suggest talking to the social team as I have no faith in phone support having any idea what you're talking about.
You must log in or register to reply here.

Are three Google Business Profiles allowed for (a) a ski school and (b) a sports shop and (c) an accommodation with the same address?