SEO is changing out there in Hummingbird land and much of it has to do with semantic search. It's not just about specific keywords anymore and it's not even really just about synonyms. Google is just getting better at understanding user intent and trying to match the words in your query with the answer you are actually seeking, even if the words don't exactly match.

In the past the top rankings would pretty much always have the exact keywords in title that matched the words in the query. Google would also only bold the words in the SERPs that exactly matched the query. That's now changed and if you follow along I'll give you a sneak peek at how 'she' thinks and how she makes the match for the listings that get to rank on top. I'll explain all this with a local focus of course.

I started researching this after reading a post by Mark Traphagen on Google+ An Example of Semantic Search in Action Semantic search is…. In his example there was just one word bolded in the SERPs that did not match his query.

I decided to delve into how this new change Mark noticed pertained to local.

NOTE: After some experimentation, I decided to purposely search using non-standard and less popular words, just to see what Google would match up and highlight in bold. I thought I might find a word here or there that did not exactly match. I admit I was a little surprised by what I found.


Query: atlanta sedation dentistry scared of shots.
I highlighted with a red underline all words Google bolded that were not an exact match 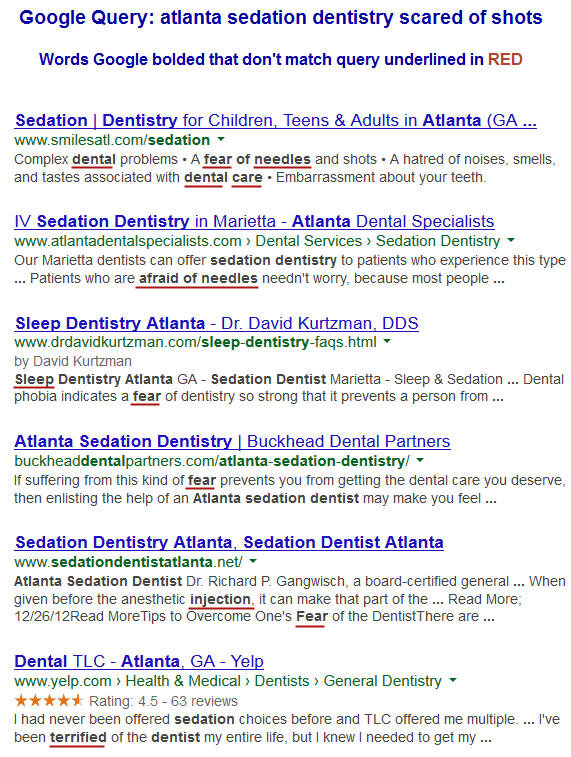 I queried "scared of shots" and it came back with related content for "afraid of needles", "injections" and "terrified of the Dentist".

But it takes one smart Hummingbird to know that "Sleep Dentistry" is another term for "Sedation Dentistry". Sleep and Sedation are not synonyms per se. So this really goes beyond simply synonym matching as explained below. 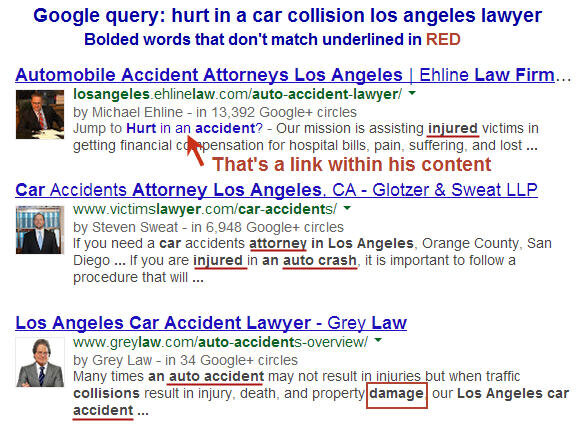 ​
I would assume she'd match lawyer and attorney, auto and car. But she made a lot of other matches as well.

And check out that link, right in the body of the SERP. For her to give a link means she's pretty sure that "Hurt in an accident" is a pretty good match for "hurt in a car collision".

Even smarter is the fact she highlighted the word "damage" which is not a direct synonym for anything in the query - but yet totally matches the spirit of the query.

Notice that this is not a mere synonymical relationship. (Some people wrongly assume that semantic search is just Google using synonyms for keywords, like a giant thesaurus.) "Dropped" is not a direct synonym for "gone." Google Search actually "understands" that the intent of my search query is semantically equivalent in human language to "authorship dropping from search."

And this is why your rich content that thoroughly covers your main topics in ways deeply meaningful and helpful to humans will gain you more and more traffic from Google in the years to come. Google is getting better and better at understanding what people mean by their queries, not just what they say.
Click to expand...

Danny Sullivan said it well too at Search Engine Land when Hummingbird was 1st announced:
"In particular, Google said that Hummingbird is paying more attention to each word in a query, ensuring that the whole query — the whole sentence or conversation or meaning — is taken into account, rather than particular words. The goal is that pages matching the meaning do better, rather than pages matching just a few words."

So what does this mean for local???

It means what Google has been telling us all along. Write for humans, NOT for search engines!

He who writes Dallas Dentist the most times does not necessarily win. People are using voice search and searching more conversationally now.

They are asking Google questions. (IE long tail search). Get in the customer's head and figure out all the questions they may have and answer the question in multiple ways with rich related content.

Or in other words... Find out what the Hummingbird likes - and feed it to her!

Barry also did a post about Mark's post, so you can see a little more discussion here.

Google Bolding Related Words In Search Results - Not New
You must log in or register to reply here.