Whew! Did someone just reach inside my brain, read my mind and put all my Google Local frustrations in writing? Someone finally summed up SO many of the complicated Google+ Local issues that plague consultants and business owners alike.

Damian Rollison, a VP at Universal Business Listing just wrote a VERY comprehensive article over at Streetfight. It is so concise, yet covers so many of the problems with Google+ Local that we all face.

It says something about Google?s local products that consultants and bloggers like Mike Blumenthal and Linda Buquet are known specifically for their skill in keeping track of the name changes, the shifts in direction, the feature rollouts and rollbacks, and the exception cases and frustrations that have become a fact of life for local businesses trying to use the search giant?s services. The much-publicized shift from Google Places to Google+ Local that took place back in May (and still has not finished rolling out) is just one milestone in a complicated history...

Imagine, though, the confusion in the mind of the typical small business owner, especially the business owner who falls into a difficult category such as that of service-oriented businesses. My guess is that those who try to follow Google?s ever-shifting guidelines are frustrated, and that many are just giving up.?
Click to expand...

I am consulting for a company that has a hornet's nest of complicated G+ L problems. Have never seen one company so tied up in knots with so many Google local problems. Every problem in the book! Yesterday after I explained how to fix just a small portion of the problems, my client sent me the following cartoon. 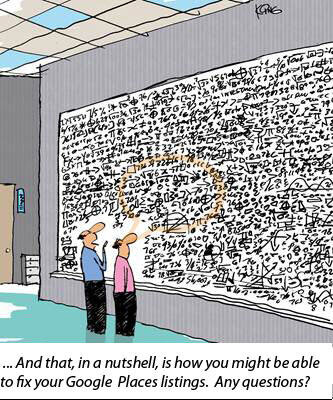 That about sums it up, right???​
In his article, Damian covers SO many different Google+ Local issues. He touches on the branding confusion (including the fact the old dashboard is still called Google Places) and the service area business/hide your address issues. He talks about the half baked, half done and seemingly stalled upgrade to Google+ and all the complications AND exclusions of the current Google+ merge/verification options.

Seriously, if I had the time I could have written that article. BUT if I did there would have had more ranting and it would have been 5 pages long. (You know how verbose I can be... )

I know some major things Google is working on that will help solve some of the problems.
I keep 'thinking' I see a light at the end of the tunnel.

But the problems keep coming and the solutions are just too slow to materialize and everyone is just getting more and more frustrated. Change is badly needed and can't come soon enough!