Exactly. Maybe they should rename it to "Google Keep For A While"...
Latest Blog: AdSense: Why you should avoid AutoAds

Frank has an interesting take I had not thought about as far as why Google is killing Reader.

The Cost of Privacy Helped Google?s Decision to End Reader

Three popular alternatives to Google Reader
The end of Google Reader was announced in the March 13 Google Official Blog post, A second spring of cleaning. (That same post listed numerous other Google apps the company deemed obsolete.) In a related post, Google software engineer Alan Green cited two reasons for ending Reader: “(U)sage of Google Reader has declined, and as a company we’re pouring all of our energy into fewer products.” Reader users have been moving to alternatives that promise a richer visual experience.

Pulse (site) is one example of these enhanced RSS readers. It lets you manage news feeds in a way that’s as visually stunning as it is simple. A Web-based aggregator, it displays feeds as tiled images (see Figure 1). Windows 8 fans might find Pulse one of the easiest transitions they can make. 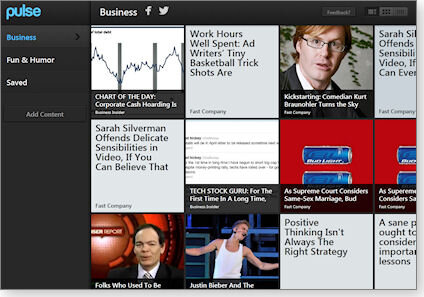 Using complex algorithms, Pulse tries to determine which stories in your feeds will be most interesting to you. It acts somewhat like a personalized news page, complete with the stunning visuals you expect from a modern news site. Pulse is available as an app for iOS and Android. No Windows Phone app has yet been announced, but Pulse is being heavily promoted with Windows 8 and Internet Explorer 10.

Pulse is free for both publishers and subscribers. The site is partially ad-supported and also has premium content offered through paid subscriptions.

Feedly (site) is another Web- and mobile app–based RSS reader that boasts the same visually rich user experience as Pulse. It’s grown in popularity since the announcement of Google Reader’s end.

Feedly is a bit more customizable than Pulse. Users can display articles in various views such as Titles, Magazine, Mosaic, and Cards, plus a straightforward view of full articles that resembles the look of a traditional newspaper (see Figure 2). It also gives you a robust directory of available RSS sites to fit a variety of tastes and interests. 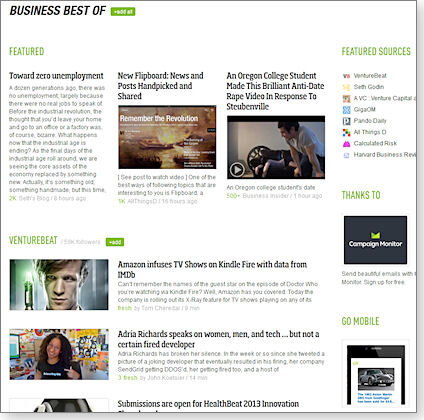 NewsBlur (site) is another popular solution. In addition to simple news aggregation and a straightforward user interface (see Figure 3), it has a training feature: it can learn what stories its users prefer to see — or not see — in their feeds from various sites. That can be a powerful, time-saving tool, especially if you find yourself spending more time searching for interesting stories than reading them. 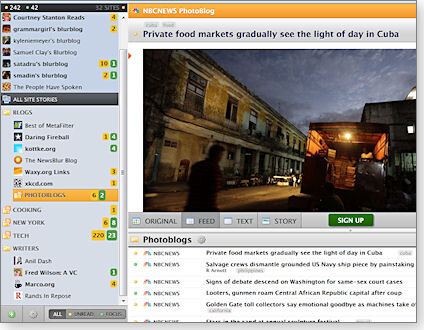 Some good ones with screenshots.

We’ve had two crazy, wonderful weeks at Feedly. Over 3 million new users have joined Feedly since the announcement of the retirement of Google Reader. We are thankful that so many Reader refugees have chosen Feedly for their new home, and are adding hardware as quickly as we can to make that transition as seamless as possible.
Click to expand...

Just wanted to share my experience of transitioning from Google Reader to Feedly. Wow! I'm more than impressed. It took maybe 5 minutes to create a Feedly account and import my Google Reader feed and I have well over 400 blogs in my reader.

The Feedly display on my desktop and my iPhone is amazing too. I have to say, I was mad about Google Reader going away but now that you guys pointed me to Feedly, I won't miss it at all. Feedly kicks butt over Google Reader.

Thanks for the head's up on Feedly!

Dr. Pete at Moz is researching options: An RSS Reader A Week: In Search of a Google Reader Replacement

Google finally shares why it's killing off Reader...

Why Google Reader Really Got the Axe | Gadget Lab | Wired.com

Having looked at several alternatives, it looks like I'll be going with either Feedly, which integrates nicely with Firefox, although I may continue to experiment with and watch The Old Reader.
Latest Blog: AdSense: Why you should avoid AutoAds

I need to make a decision and admit I have not researched in detail yet. But based on everything I'm reading I think I'll likely go with Feedly too.

The Countdown Is On!

Feedly
Of all the Google Reader alternatives, Feedly has made the strongest play for Google’s customers. It automatically imports your old Google account, and its clean, easy to use interface is, in some ways, even better than Google. For example, if you need to clear out unread articles from your feed, you can just click an “X” next to the headline and move on to the next one. Feedly offers extensions that allow you to read it on Chrome or Firefox, and there are apps for iOS and Android.

Newsvibe
If you hate, hate, hate app bloat, Newsvibe is the super-simple, web-based RSS reader for you. There are no extra features, but it does have a clean interface and is perfect for someone who wants to catch up on their RSS feed without installing an extra extension or application.

Newsblur
If you miss Google Reader’s social sharing features, Newsblur might be right for you. It integrates your RSS feeds with your Twitter and Facebook accounts, so you can keep track of all of your news outlets from a single interface. Like many apps, Newsblur is free for moderate users, but if you use a RSS reader daily you’ll have to pay extra.

FlowReader
Like Newsblur, Flowreader gives all your news sources, from Facebook to Twitter to RSS, a home, and helps your organize your news so your paranoid aunt’s warnings about genetically modified food don’t disrupt your work reading. Even better, Flowreader is free, so it’s a great place to experiment with integrating your news sources.
Click to expand...

Forgot to mention I finally set up Feedly and the Old Reader.

Kinda leaning toward Feedly. Had to re-do feeds to get them to semi work but it cuts off and hides some feeds to had to delete a bunch and re-org differently. Also does not show in alpha order like I have Reader set up. I put the number 1 in front of my most important feeds to get them on top and Feedly is hit or miss with that. So still tweaking and may check out some others.

This change is going to put a serious dent in my news discovery process no matter how you cut it, I'm afraid.

I have been experimenting with several feed readers over the past month or so.

Feedly is nice enough but I just couldn't set it up the way I wanted it.

If you liked Google Reader, you really should have another look at The Old Reader. They've added some features even in the past month and it's as close as you can get to the old Google Reader interface. It will also import all your Google Reader feeds from a Google created Reader archive.

One thing about The Old Reader: It encourages you to log in with your Google or Facebook or Twitter account, but that may stumble trying to directly import subscriptions. If, like me, you prefer not to link accounts for privacy or other reasons, just click on Login/Register instead and set up a new account. I found this worked better and didn't stumble at all importing the subscriptions.xml file.
Latest Blog: AdSense: Why you should avoid AutoAds

Madly did a last grab for new feedreaders last night. Was/still am using Feedly but some things I didn't like.

So signed up for Newsblur and DiggReader. So far I'm kinda liking DiggReader the best. It's VERY close to Google Reader.

Soooo sad to see G Reader go. I think we should have a virtual burial today.

Linda, have you tried The Old Reader? It looks, feels, and works pretty much like Google Reader except it's still undergoing improvements. There's virtually no learning curve.

I've tried all of them and so far this is what I've settled on. My second choice would probably be Digg. I just could not get used to the Feedly interface.
Latest Blog: AdSense: Why you should avoid AutoAds

I did set up Old Reader initially and for some reason didn't like it. So just now tried it again and it's pulling all my old feeds from before I culled and cleaned out Reader. And none are in the right order, it's all scrambled with feeds I never read any more on top. (I think that's why I didn't like it.) So just tried importing my new cleaned up list of feeds and it choked and died. But I'll try it again. Now it didn't import and is super slow. Maybe having problems with everyone starting to use it today.

The developer that worked on Reader and left Google said he likes Newsblur and Digg, so that's why I tried those 2. Newsblur "looks" good but I have not gotten in yet. There are 1,000 people in line ahead of me.

Seriously f'ing crippled and ticked off. My workflow is pretty much trashed today.

I have like 6 different readers set up and none does what I want. So I have to go to one for this and another for that. Some don't update in a timely fashion either so I miss a ton of posts and have to go to a different one to read updates.

I had done a lot of preparation and tested several. BUT as long as Reader stayed live, I found myself always going there to check - therefore did not realize some of the limitations of these others until I was forced to use them and no longer have Reader for back up.

Plus one of my most important sources of news is Google Alerts which now does not work via RSS either. So I have all these emails coming in and have to jump between Gmail and readers to check news. THEN if an alert came in via RSS that I want to save to read or post about later - I'd just star it and it would be right there in Reader. Now I have alerts coming in via Gmail so everything is just discombobulated!

FYI on the Reader discontinued page Google offers this link which has a ton of alternatives in case anyone is still struggling to find the right one. http://alternativeto.net/software/google-reader/

Not a happy camper today. Don't really need any more suggestions. I think I have the best ones set up and they all say they are working on a bunch of fixes that will likely get at least one to the point where it's usable for me needs. Just right now I feel pretty crippled in the feed discovery department. So just venting!

I think part of the problem today is they're all swamped with late converts from Google. I'm finding them (well, 3 I've tried this morning) to be noticeably slower than usual.
Latest Blog: AdSense: Why you should avoid AutoAds

They each have their own quirks but main issues I have are organizing and ordering and the way they display if there are new unread posts or not. Again each one has a slightly different problem that makes it not quite work for me.

I'm confident I'll be able to settle into one - it's just this old dog had a routine and she liked it!
You must log in or register to reply here.