Did Infogroup toss all their listings after they launched their new site?

Anybody else having issues with Infogroup right now? They just launched a new site and it appears they completely tossed out every login we have that I've been able to check so far. Not sure if this is a temporary issue or what.

Same here. I'm waiting on a call back to see whats going on.

Yep. I haven't investigated to deeply but my old login became invalid.

Phil, one of our Top Contributors did a fantastic post about it - Latest Local SEO Labyrinth: the New ExpressUpdateUSA | LocalVisibilitySystem.com

I've attempted the phone verification with two different clients now and both times I received this message and the call didn't go through: 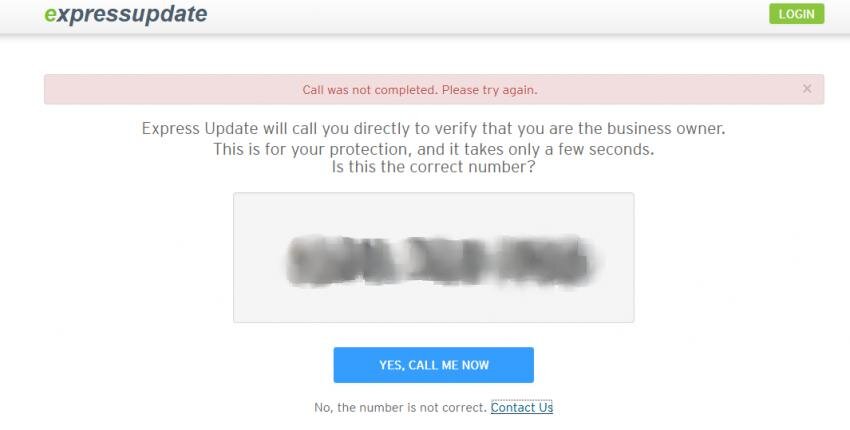 Those aren't forwarding numbers or anything?

No it's a direct line. We get the client on the line, send the call, give them the code that pops up on the screen, and the call should come into their office.

On one attempt, the call actually made it through but it hung up after asking for the verification code.

I called their support and I was given a number of a guy who apparently deals with the instances of SEO's trying to update info or something like that. I'll report back after I talk to him.

This is exactly what happened for me.

Was finally able to send a successful verification call through to our client, gave our client the code (which pops up on the screen as soon as you hit the button for the call to go through) and they jumped to the other line to give the code to the automated caller.

As soon as that is done, the screen changes and you are prompted to create an account. No need to use an e-mail specific to the business you are claiming. After that you can make edits to the listing.

You da man, Colan. Thanks for the detail.

So I take it they didn't "unlock" your old login info - or was it the case that you were adding your client to ExpressUpdate for the first time?

I haven't been able to unlock our old login credentials.

In this case I was claiming an existing listing so that I could optimize it. I had to create a new login.

So is there an actual person on the other end or is it completely automated - just enter the pin # with the phone dial pad? What I am kind of concerned about is someone from infogroup trying to upsell a client on their "premium" or "enhanced" listings before we're able to create an account.

What have you guys seen so far?

EsR said:
So is there an actual person on the other end or is it completely automated - just enter the pin # with the phone dial pad?
Click to expand...

Hey Eric, it's an automated call.

Anyone have any strategies on how to handle this if your client has one of those auto answer messages when you call in.

Has anyone figured out how to delete a listing? Even after claiming a listing (duplicate with bad info) we can't see to find a way to delete it.

Anyone have any strategies on how to handle this if your client has one of those auto answer messages when you call in.
Click to expand...

On another note, now when we try to add listings infogroup just says, "Thanks we'll email you when it's approved." 2 weeks later, no email.
You must log in or register to reply here.

A
Google Posts Being Removed After GBP Suspension is lifted

Map Rankings Dropped After a Merge

Reporting a client's competitor's GBP listing for taking over an old/closed shop (different industry), inheriting all its (off-topic) reviews