I have a pediatric dentist whose Yelp listing has only 1 review. That review is a 1 star and it is a doozy. The Yelper calls her a racist and makes some crazy accusations.

The dentist told me that she asked patients to leave a review on her Yelp listing to water down the negative one. Every review was filtered! I've heard about this in the past and she assured me that:

The dentist told me that she spoke w/ an ex Yelp employee who's now with a big dental/auto review/patient communication company (hint: DF). This ex Yelp employee told that her listing has been "black listed" by Yelp and she will have to pay for advertising in order to unfilter future reviews.

Like I told her, I can't believe that a company as big as Yelp can get away with extortion and that was a bold accusation by the ex Yelp employee.

I wouldn't be surprised if the ex Yelp employee was just pissed off and told her some BS story to smear Yelp.

I know Yelp is a PITA and there are lots of blog posts out there about how Yelp sucks, but she's claiming Yelp is outright extorting her- or at least attempting to.

Has anyone else here heard similar stories?

You have not heard this before Chris?

There are tons of allegations like this and many major news stories about it have hit the major news sites. Not saying any are true just saying it's been going on a long time and many of those companies that claim to have been extorted claim to have proof.

I've heard of local business owners accusing Yelp of not playing fair. But this is a first- having an ex Yelp employee tell my client.

Yes- this is hearsay- I was told by my client. But what intrigued me was the source.

Interesting anecdote, Chris. Even if it is hearsay, it has a familiar ring. Yelp - that giant in the online reputation world - has some pretty serious reputation management issues of its own. These have been building for years, and it seems to me that I am hearing a greater-than-usual number of complaints recently. Whether these repeat issues stem from poor training practices at Yelp or an actual intent to extort money, I certainly can't say, but Yelp has a problem on its hands and it won't go away by ignoring it.

Yes there have been a couple new stories about this problem or allegation just in the last couple weeks, so I agree with you Miriam, seems almost like it's getting worse not better.
M

We need creative ways to use negative reviews to get a positive reaction!﻿ 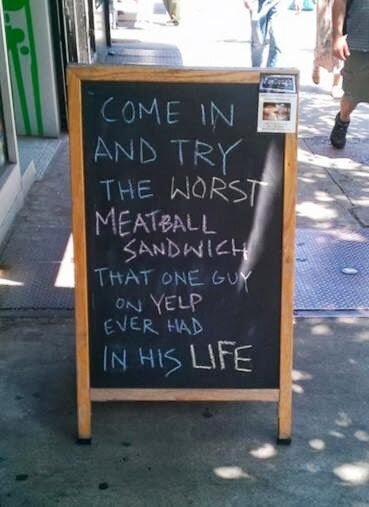 Having followed this issue for some time, I believe that Yelp has reformed its sales practices in recent years in response to criticism and lawsuits, but it has almost certainly engaged in extortion-like behavior in the past.

An ex-Yelp employee from years ago would likely have witnessed blacklisting if not full-blown blackmail. The evidence collected by investigative journalists is extensive -- It can't all be sour grapes! e.g., http://www.eastbayexpress.com/oakland/yelp-and-the-business-of-extortion-20/Content?oid=1176635

But as a public company, Yelp is much more cautious today. And correlation does not mean causation when trying to understand Yelp's review filter. Still, does the company now use its unassailable "natural" filter algorithm to cloak unsavory practices of creating pain and rewarding payers? I don't know.

Keeping a sense of humor about it is a good way to stay sane and shrug off the bad reviews -- or else turn them into a net gain! Thanks MichaelJ! (Here is the source of that photo he shared, BTW:
http://www.huffingtonpost.com/2012/06/28/yelp-worst-meatball-sandwich_n_1633755.html )

While researching another issue, I just came across Yelp CEO Jeremy Stoppelman's rebuttal of the East Bay Express piece I quoted above:
http://officialblog.yelp.com/2009/02/kathleen-richards-east-bay-express.html

I suppose the issue remains a "he said, she said" one. Still, no doubt Yelp salespeople are more conscious of these allegations/perceptions today than they were 5 years ago--I'd be surprised if they didn't make a concerted effort now to avoid any implication of blackmail or even explicitly disavow it.

I had a conversation about this issue w/ a local social media consultant. She said that local Yelp reps have the ability to report local businesses that are aggressively soliciting reviews and can blacklist local businesses so that their reviews are filtered.

Her suggestion is to reach out and try to build a relationship with the local Yelp rep and ask them how my clients can "play by the rules" and explain the situation.

My concern is that if I get the local Yelp rep involved, their job is to sell paid listings. My client has no desire to buy ads from Yelp, especially after their experience with the filtered reviews.

I would like to add my 2 cents to this. We manage 50-100 clients at any given time in the dental and orthodontic fields. The most common issue I see with Yelp is that a particular client will show only a couple of 1-3 star reviews and if you click on the filter button 20 Five star reviews pop up. We get calls on a regular basis from clients saying Yelp has contacted them to address the bad reviews, even though several positive reviews are filtered. Why they are allowed to continue this practice is beyond me.

Wow...I'm so glad I found this thread and your specific post. I talked to a dentist today that has this EXACT issue going on. He has a Yelp listing that shows 1-3 reviews and because one is really bad, his overall rating is really poor and obviously it's a poor reflection on his practice.

But if you click on the filtered button, he has over 30 5-star reviews! These are all legit reviews from his patients. While he admitted not every review was left by experienced Yelpers, he figures at least half of them are so he didn't understand why they weren't showing up.

I don't do a lot of Yelp stuff so I couldn't give him a straight answer, which is why I headed here for help. So the bottom line is, nobody has an answer??


Dustybones said:
I would like to add my 2 cents to this. We manage 50-100 clients at any given time in the dental and orthodontic fields. The most common issue I see with Yelp is that a particular client will show only a couple of 1-3 star reviews and if you click on the filter button 20 Five star reviews pop up. We get calls on a regular basis from clients saying Yelp has contacted them to address the bad reviews, even though several positive reviews are filtered. Why they are allowed to continue this practice is beyond me.
Click to expand...

It's ultimately up to the client as to what they decide in regards to advertising with Yelp.

Therefor there should be no harm or no fowl in you asking the local Yelp rep what the process is to ensure that the business in question is "playing by the rules" and if there is anything they can do until they decide to advertise. If the business is already blacklisted, there's nothing worse that can happen short of the listing being deleted (which might be a blessing in disguise) and even the paperwork that the local yelp rep suggests that your client fill out could be helpful in understanding whats going on.

How do you know if a business has been blacklisted? And how do businesses get blacklisted in the first place?

There has been references in this thread to "local Yelp reps," I didn't even know there was such a thing. How do you track these reps down? This client is located in Austin, TX so I'm assuming I'd want to look for a Yelp rep for Austin, correct? Is there a directory of these reps on their site?

I'd also like to find out how to connect w/ a Yelp local rep.

Duh- it just occurred to me to check out LinkedIn.

You can search for Yelp employees in a geographic region.

I'm going to reach out to an account exec and see how it goes.

Found this link discussing Yelp Filters: Press this really hard
You must log in or register to reply here.

S
1-star review (not by customer) Can this be removed?