Do You Recognize These 3rd Party Tracking URLs?

I'm having an issue with the URLs being changed in my GMB account and not knowing where they are coming from:

My client has decided to use some third party management tools to help manage his listings. I use tracked URLs that are specific to the website we manage for him and he would prefer those URLs be the standard for his locations. However, he must have some 3rd party pushing URLs to his locations because they change without GMB prompting for approval. He has said that his listings are not connected to any other accounts but it can't be true.

You can see here that the top 3 URLs have been changed and the lower 3 are the correct URLs (screenshot is straight off my bulk edits spreadsheet). Here are the URLs:

Do you all recognize these URLs from any 3rd Party managers you use? We really just need to figure out where he's got them connected and break that connection so our URLs can stop being overwritten.


Thank you so much!

Thanks for sharing. The screenshot didn't work. Could you try again?

Have you double checked to see if there are any other managers in the account that could be changing them?

And those tracking URL's are generated in Google Analytics.
C

Thanks for the response!

I set up the analytics tracking URLs but the ones that come through are different:

You can see, the top three are some of the ones that have been replaced. There are no other users and I know they were using MozLocal at some point- does Moz get added as a manager to the listing? The other third party managers I use don't add a user and our account still seems to be the only user on the listings.

The UTM parameters are from Google's URL Builder tool to help track certain elements. Those are normal to use on various campaigns to track efforts. The hash elements may be part of the site framework. Since it's using an AJAX library in the build, it's possible that is the result of selecting or changing certain page elements. An example is that I was able to navigate to this URL after looking at reviews for a facility:


HTML:
So maybe it's part tracking and part website?

Eric it is not from the site structure, I saw this type of tracking on other listings too, but have no idea where they came from.

So just to be clear we're all on the same page:

You're saying that this tracking code is mysteriously being added, and you want to know where it comes from:
?utm_source=Local&utm_campaign=Local&utm_medium=GoogleLocal

Or are you asking about the #Dp40rv style URLs? The # markers are usually something you see along with an AJAX site, as Eric mentioned. I have no idea where those might be coming from if those are what's mysteriously appearing.

If you're asking about the ?utm_source=Local&utm_campaign=Local&utm_medium=GoogleLocal code though, here's an article about how and why you'd use a URL like that in a GMB listing. There could be a management tool out there that would update a URL with the UTM tracking code, but it's far more likely someone else in the company has access, and is updating things manually. You should be using tracking for those URLs anyway, it gives you more control in Analytics, and there's really no reason not to.

I'm also having this problem with our multi-location business as pictured below. No idea why this is happening. I'm having to manually go into GMB and remove these suffix anchors which seems to stop them coming back. We also use Moz Local. 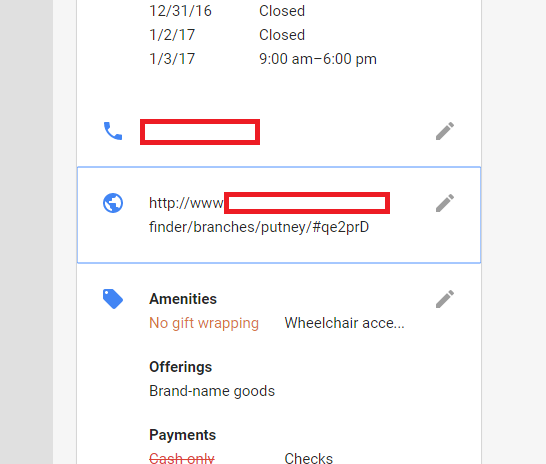 Hmm... I wonder, is Moz is appending them? Which management tools are being used for both these cases? Maybe that could give us an idea what might be happening here. At least it could give us a direction to look.
C

Yes, I'm pretty sure it's Moz. My client also uses Moz although we don't have access to his Moz account, only the GMB account. I was GUESSING that the tracking was coming from Moz but my client insisted that his GMB accounts were no longer syncing with Moz so I was checking to see if I was mistaken or he was mistaken.

I'm going to be asking for access to his MozLocal dashboard to look into it more: I work with Yext as well and they actually have an override field for their URLs so that I can customize tracking URLs to help us see which citations our leads are coming from (or at least, we're able to differentiate GMB from the other citation sources). I don't have enough experience with Moz to know if they have that capability or if their system pushes those tracked URLs. I'll keep working on this and check back in when I know/see more!
C

This is the actual site URL:
https://www.lockaway-storage.com/self-storage/calexico-ca-f7426

This is the tracking URL I use and would like to keep in GMB:
[FONT=&quot]https://www.lockaway-storage.com/self-storage/calexico-ca-f7426?utm_source=GoogleLocal&utm_medium=storEDGE&utm_content=f7426[/FONT]

This is the URL that keeps overwriting my tracking URLs:
https://www.lockaway-storage.com/self-storage/calexico-ca-f7426#BlK4yQ

I'm about 90% sure the replaced URLs are coming from Moz.

Got this alert through today: 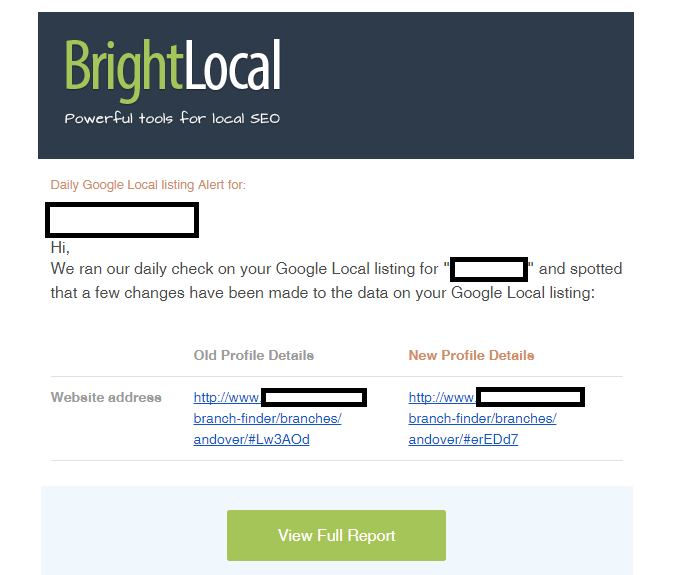 Bit of an odd one!

Hi Cubanlilly!
Thanks for raising a good question. I work for Moz and asked our engineers to take a gander at your query. The answer is that, yes, Moz Local was previously generating URLs like this one https://www.lockaway-storage.com/self-storage/san-antonio-tx-f5250#9lW5OX (but not like the UTM ones)
which we do not believe have any impact on SEO, but we then recently stopped doing so because our customers expressed concerns.

For some more background on this, the purpose of the URL fragment was to help us identify when listings we've distributed take effect on partner websites. We didn't want to solely rely checking each listing-related field to see if they're the same, given that each search engine / directory / aggregator ends up changing submitted details. Basically, it was a measuring tool on our end. However, our customers' needs come first and we're no longer doing this.

My understanding is that, if the customer's Moz Local listing is synced with Google My Business in the Moz Local dashboard, these URLs should update as a result of our bi-weekly push. Please, let me know if this helps answer your question or if you have any further questions.
C

Thank you for your response, Miriam! To be clear, I was never worried about the SEO value at all and just figured you all were tracking URLs for your clients which makes total sense. We just use the tracking URLs on our end to show in the metrics of our website tools. This definitely isn't an emergent situation, we're just stumped as to what might be pushing these URLs. We are also in touch with Localeze to check on their end.
We definitely used to have the locations synced with Moz and still use your metrics tools because they're great. But my client is under the impression that they turned the syncing off so that we could use the tracked URLs so we were investigating other ways those might be appearing.
The bi-weekly syncing makes sense with the timelines on the changes I've seen. But, as I said, we're supposed to have disconnected the accounts which my clients confirmed with Moz. It's just a mystery we'd like to get to the bottom of!

My pleasure, and I'm a bit stumped as well if your client has confirmed with our help@moz.com team that the business is no longer synced with Google My Business in the Moz Local dashboard. You are welcome to contact the Helpsters again via that email address if a second look would help in any way.

While I like BrightLocal's rank tracking reporting tools, I find that their other reporting tools have less value and some are just plain not working correctly or reporting inaccurate data.

One of the most annoying ones is their GMB reporting tool. Every darn day it would report some change or another and it was always wrong. I stopped using it.

Just don't worry too much about what they're telling you about your GMB listing on a day to day basis. Or better yet, turn off their email reports about that.

MiriamEllis said:
Hi Cubanlilly!
Thanks for raising a good question. I work for Moz and asked our engineers to take a gander at your query. The answer is that, yes, Moz Local was previously generating URLs like this one https://www.lockaway-storage.com/self-storage/san-antonio-tx-f5250#9lW5OX (but not like the UTM ones)
which we do not believe have any impact on SEO, but we then recently stopped doing so because our customers expressed concerns.
Click to expand...


I just signed up a new client and used Moz Local for them...and as of the 27th of February, the tracking URLs are definitely being added to his Google My Business/Plus links.


To be frank, there is not much clarity to users of Moz Local in terms of exactly what happens once someone signs up. I have been pretty disappointed in this, and think it does not reflect the way Moz typically operated. I have had a Pro Premium account for years ($5000 annually) and love your products, but Moz Local is extremely poorly documented on the user side once someone signs up.

Hi Adam,
I want to apologize for any lack of clarity you're experiencing regarding what to expect when you sign up for Moz Local. Our FAQ is something you might find very helpful https://moz.com/local/faq but please always make use of our help desk if there is a specific query you have that you're not seeing answered in our documentation. You can contact our Helpsters at help@moz.com to get one-on-one help from the team with any questions you have.

May I request, please, that you start a conversation with the Helpsters regarding the tracking URLs you are seeing so that they can look directly at your dashboard (which I can't do here at the Local Search Forum)?

Finally, I do want to mention that we are investing resources in producing further guides that should go beyond what the FAQ currently offers, in terms of what to expect when you sign up with Moz Local. In the meantime, please make use of direct support from our Helpsters. We want to hear from you and will help you in every way we possibly can to feel fully informed and comfortable with our product.

Thanks so much Miriam for stopping by to offer advice!
You must log in or register to reply here.